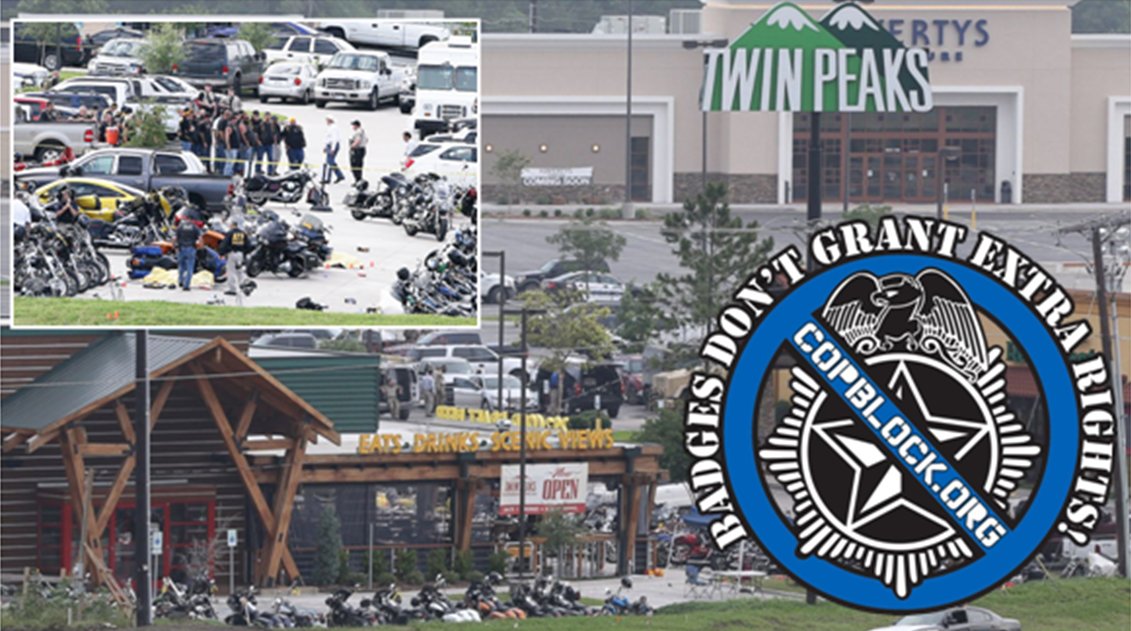 After reviewing more than 8,800 pages of evidence including police reports, dash-cam videos, photos and audio interviews related to the Waco, Texas shooting that left nine dead and 18 injured four months ago, the Associated Press has determined that gunfire sustained by bikers included rounds fired by police.

Officials have released almost no information about the biker event that occurred at a Twin Peaks restaurant on May 17, but police have said that after a disturbance in the parking lot, a fight began in the restaurant’s bathroom that quickly escalated into an armed brawl and shootout after one group of bikers showed up uninvited.

The truth of the matter is unclear however, and gag orders have been imposed prohibiting the release of surveillance footage that could shed some light on the incident – like who fired fatal shots. Police have not said, and the AP says it does not yet have a clear picture of what transpired either.

Despite the immediate and sweeping characterization by media and police that the gathering was a congregation of violent criminals, the meeting was actually a legitimate and organized group of motorcycle riders meeting to discuss political issues.

According to the website of the Texas Confederation of Clubs and Independents – the group that organized the event – the gathering was a scheduled part of the 30th Annual National Coalition of Motorcyclists. Police maintain however, that the event was a gathering of five violent motorcycle gangs who had met at the restaurant to settle differences over turf and recruitment.

Police claim they received tips about impending violence at the event. Of the affiliated groups in attendance including the Christian Ministries, and the Veterans Club. One of the bikers killed was 68-year-old Jesus Delgado Rodriquez, a purple heart recipient.

Eyewitness reports have painted a different picture of the incident than what has been presented by police. The AP said of the nine surveillance video angles released to them, none showed the parking lot, where police claim the incident began after one biker had his foot run over. Instead, the video shows bikers running away from the shooting or ducking under tables, the AP says, presumably to dodge incoming gunfire from police outside.

Waco Police Chief Brent Stroman said three officers fired a total of 12 shots, but police have never said whether those bullets struck anyone. Officer George Vrail, who was assigned to a special detail to cover the meeting wrote in the incident report however, that he saw two officers during the shootout who “had multiple suspects down on the ground.”

The officers reportedly told him they had “struck multiple suspects with their patrol rifles,” after being “engaged” as they got out of their patrol car. Additionally, officer Keith Vaughn wrote that another officer told him he fired one round “to stop [an] individual” that was shooting into the crowd.

Police and prosecutors have claimed that video footage exists showing Bandidos and Cossacks shooting at one another but the AP says video it has reviewed doesn’t clearly show who is shooting at whom.

Police have said that minus those killed or injured – out of about 200+ people in attendance at the event – only three were not arrested. Detainees were each given a $1 million bond.

“You don’t throw everyone in jail and sort it all out later,” former Texas judge who represents several of the bikers, Susan Criss said. At the end of June, all but six of the 177 people arrested had been released.

Also, small business owner Matthew Alan Clendennen is suing the city of Waco and McLennan County, claiming in a federal case that he lost income and suffered damage to his reputation because of his wrongful arrest. In June, District Judge Matt Johnson imposed a gag order in the case prohibiting the release of video surveillance footage from Don Carlos to the public Clendennen believes could exonerate him.

The AP said Saturday that a mountain of evidence including dashboard video of people fleeing the scene while shots ring out, audio of police threatening to shoot people if they rise from the ground and photos of bodies lying in the restaurant parking lot, will be reviewed by a grand jury – but it is unclear when.

Police have claimed that 430 weapons were recovered from the crime scene, including 151 guns, along with tomahawks, brass knuckles and a machete.

Officers called the incident “a remarkable situation where [Waco authorities] were faced with open gang warfare,” and have also claimed that Waco officers turned their automatic rifle settings off and fired only 12 rounds, while 32 other rounds came from bikers.

The Texas Confederation of Clubs and Independents website has an entire page dedicated to National, State and Local Happenings with links to various political calls to action and events. That page features a photo of a U.S. Marine standing at attention with a group of bikers and a photo of an eagle over an American flag with the motto, “Don’t tread on me. I refuse to allow my civil servant to run my life.”

Conspiracy theories about the incident aside, the existing evidence appears to show that over-zealous police, while acting on poor intelligence of impending violence from the bikers, reacted unnecessarily to the situation by gunning down and arresting unarmed and innocent bystanders.