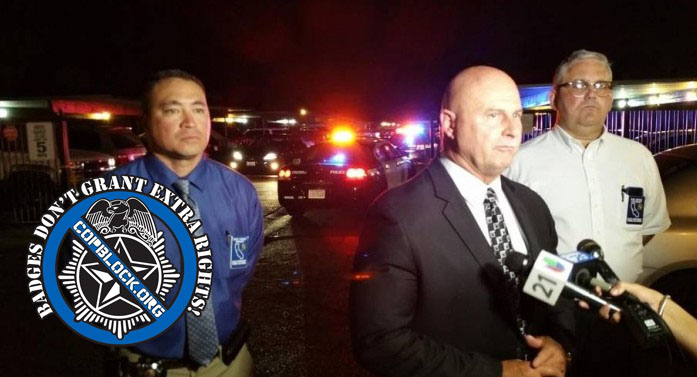 The 4th officer involved shooting in as many weeks happened last night. Around 6 pm on September 19, 2015, Fresno police officers deployed two tasers on a suicidal man with a gun to his own head. To add insult to injury, they shot him in the shoulder and in the cheek after negotiating for only ten minutes. Why they would tase someone with a gun to his head is beyond me.

A few hours ago I watched the police tase a man at a protest in Cincinnati. He was about five feet in front of me, and he reacted with all types of violent body convulsions. If he had been holding a firearm to his own head, it is more than likely that he would no longer have a head.

Sean Pottorff, the 47 year old man, is in stable condition, thankfully. Hopefully he will be able to receive the mental health attention that he needs in order to properly address whatever his personal needs are.

This was the second time in 24 hours that the police had been called out to his house. The first time they negotiated the leaving of a female companion, then left. When they returned the next day the police say they had plans to arrest him. , and search for his gun. Instead they shot him.

“Two gunshot wounds to the shoulder area and one of those may or did strike him in the cheek,”

Pottorff was charged with “assault with a deadly weapon on a police officer” I’m not sure how they justify this charge based on the fact that he was pointing the gun at his own head. He also was charged as a felon with a firearm, as well as with a violation of felony probation.

One again the police use force instead of communication to deescalate a tedious and emotional situation. Individuals suffering from mental health disorders need to be handled with patience and understanding, not aggression and haste. It truly is the work of an experienced professional, not the job of an urban soldier with a high school education.

If you are once again concerned with the climate of law enforcement, and are tired of the criminalization of mental health consider calling the Fresno Police Department tomorrow during business hours, and voicing your discontent.

If you wish to become more involved in police state activism consider joining the CopBlock Network  and putting your skills to work in the manner you find most effective. If you are a content creator (Film, Graphics, Writing) contact us via the CBN link at that top of the page, or the submissions tab. Maybe you just want to regularly share CopBlock content and spread information through social media. Like our page and share, share, share. Regardless of what you want you do, you can help spread the message that “badges don’t grant extra rights”and further accountability in your local police department.