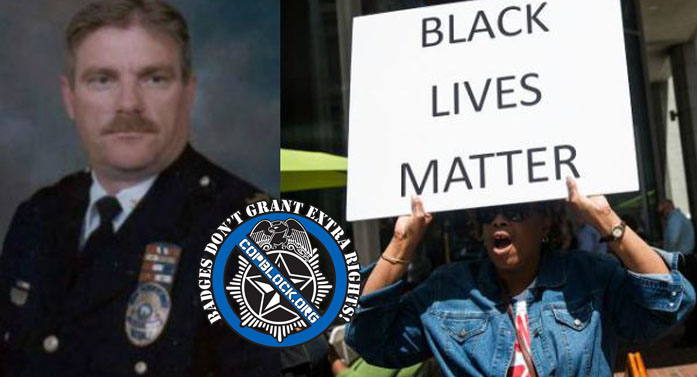 Police Chief Mike Halstead from Surf City, North Carolina, has been forced into early retirement for a Facebook Post he made on his personal account comparing the Black Lives Matter movement to an American born terrorist group. Shortly after he posted his statement to his Facebook wall on September 3rd, it was brought to the attention of Surf City Mayor Zander Guy, who called for an emergency meeting of the town leaders and soon after informed Halstead that if he did not retire, he would be fired. He agreed to retire and took 60 days’ severance.

Open letter from a Police Chief , this Black Lives Matter group is nothing more than an American born terrorist group brought on by the lie of the hands up don’t shoot during the criminal thug Michael Brown incident. The FBI and other Government Law Enforcement groups need to step up and put a stop to this. The Government and blacks would not tolerate the White Supremacist group to march through the streets and call for the murders of a race of people and a group of public servants. I agree there is a race problem in this country. It is not brought on by police officer doing their sworn duty, it is brought on by the government, the President and his cronies Al Sharpton, who is a criminal tax evader (but has the support of our so called President), Jessi Jackson, Eric Holder and that ignorant S.O.B. Farrakhan who should be charged with solicitation for murder, lord knows a white man would be arrested for the same actions of idiot Farakhan. I am sure there are many hard working Black people who will agree with me. I have been a Police Officer for 35 years. I do not judge anyone by the color of their skin, but by there actions. A criminal is a criminal whether a police officer or any other profession. I will not state statistics because black lives matter do not care or believe proven statistics. I put allot of the blame for these cop murders on the media and the way they report police related shootings. There is no need to list or even state the race of a person shot by the police. It is more important to wait for the facts and report those. But and a big but that does not make money for these greedy media a[**] h[***]s. When a black thug is killed by the police they are all over it as is Mr. Barack Obama. However when a police officer white, black or any race is murdered for doing his job the media is short with it’s reporting or not at all. When a white person is killed by a black officer you hear nothing. Has our so called President spoke publicly about these murders of police officers by blacks, HELL NO he has not. Step up Mr. President, or step down because we do not need you. Has our Attorney General spoke against these murders, no of course not because she was appointed by Barack Obama. Now let me say this, and this is not a threat but common knowledge. I have instructed my officers to be vigilant, if threatened take appropriate action. If that means shoot a thug, then do it and answer for it while you are still alive not dead. Law Enforcement is fed up with this murderous society who want to take out those who protect and serve. Imagine if all law enforcement shut down for just 1 day. There would be murders, rapes, robberies, you name it. America wake up, all of you black, white, Mexican whatever you need the police, we do not need you. End this Black Lives Matter bull s[**]t and start a movement that all lives matter. As for the New Black Panther movement who wants to kill whites and cops, go for it, we are ready for you. You take one of us and there will be 100 who will step up and end you. This letter is not meant to offend anyone, just the feelings of a man who has spent the last 35 years of his life serving and protecting, for what so a thug can take it or to be treated as a criminal by the very people I swore to protect. Let’s get this around folks so maybe our President and the media will get a wake up call. Be safe all of my Brothers and Sisters in blue, not white, black, yellow or brown BLUE.

It seems as if his statement is a call to action for police officers and government to use their monopoly on violence to crack down on activists. There is no murderous society against Law Enforcement, there have been numerous reports and statistics to prove that is a fallacious argument. Halstead’s irresponsible statement is categorizing every BLM activist, or any activist who calls for police accountability into some clandestine cell system. It’s ridiculous, untrue and a dangerous Us vs. Them rhetoric.

The Black Lives Matter movement is much like CopBlock, in that its a decentralized organization, which has a variety of meanings to different people across the globe. They want police officers to be held accountable for excessive force and killings, not limited to but including that of African American lives. There are people of all races who are members of BLM, not just African Americans.

In Halstead’s statement he also brings up law enforcement shutting down for just one day. He seems to be under the impression that murders, rapes and total chaos will ensue if police weren’t there to stop it. Again, his statement is not supported by any facts or evidence. In late 2014 after two NYPD officers were killed, the NYPD wen’t on a complete work stoppage. During that time all traffic tickets and summonses for minor offenses dropped %94 and arrests were down %66. But there was no crime wave, no public demand to bring back the secret tax of traffic ticket revenue, no increase of rapes or murders. In fact statistically the crime rate dropped when NYPD had their work stoppage. Or remember during the Ferguson protests, when police officers and the national guard stood by as the city burned, members of the community stepped up and started directing traffic and trying to prevent damage to local business? It’s called self policing, and there are numerous accounts through out history where the community was held responsible for maintaining order without an external authority. Self preservation is a basic human instinct, people will protect their communities in order to protect themselves and their families.

Halstead also said, “America wake up, all of you black, white, Mexican whatever you need the police, we do not need you.” Well all things considered, it seems police need our tax dollars and revenue for the city more than we need police. All this proves that Halstead is the one who doesn’t care about statistics, facts or evidence. He just wanted to make an angry politically motivated and antagonistic post about how everyone from activists to the media are to blame for the public’s demand for police accountability and transparency. He was called out on it, and forced into early retirement. He has his right to freedom of speech and the city, and city leaders have the right to eliminate a public servant that makes statements they find damaging to the city’s reputation.

Halstead wrote an apology on wednesday

I want to thank all of the folks in Surf City for your support, receiving more than 400 shares. It was my pleasure to serve you. Thank you to my officers for your dedication, I will miss everyone of you. I would like to apologize to my family for letting you down. I also apologize to those I have offended, that was not my intent. I have served proudly for 35 years without a blemish. I guess to some Surf City Leaders that has no meaning. I guess I will learn to eat beanie wienies for a few months. I love you all.

I hope you enjoy your beanie wienies long into your retirement Mr. Halstead, I can’t say I feel sorry for you, since I’m sure you’ve exploited and burdened numerous impoverished people in your city with fines and tickets.