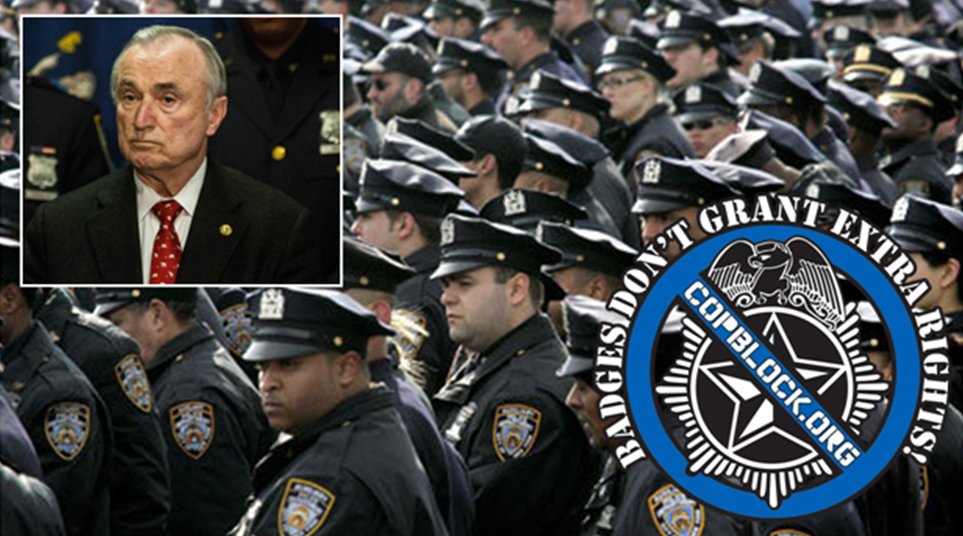 Under the guise of “community policing,” NYPD Commissioner William J. Bratton is changing the way his department disciplines its officers by giving commanders increased authority in deciding whether to punish “minor infractions.”

The New York Times reports that Bratton has already disbanded a tow squad that had been giving tickets to officers and towing department cars for being parked improperly, and ordered that the Internal Affairs Bureau stop sending investigators to critique officers’ errors in traffic court.

According to the Justice Department’s Office of Community Oriented Policing Services, “community policing is a philosophy that promotes organizational strategies, which support the systematic use of partnerships and problem-solving techniques, to proactively address the immediate conditions that give rise to public safety issues such as crime, social disorder, and fear of crime.”

In short, the strategy purports to focus on police building ties and working closely with members of communities in order to reduce crime, but the results of so-called “community policing” are often an increase in the number of police officers and department expenditures, and the consolidation of local law enforcement with what are essentially community snitch networks.

The community policing era in the United States began in the 1980s, and then became a cornerstone of the Clinton Administration when it gained federal funding from the 1994 Violent Crime Control and Law Enforcement Act.

The practice is derived out of the Broken Windows theory that maintains the close monitoring of urban environments to prevent small crimes such as vandalism creates an atmosphere of order and lawfulness that will prevent more serious crime. In other words, federally funded community policing is just an intellectual justification for greater governmental control of society.

But what does community policing have to do with scaling back discipline on cops?

The Times reports Commissioner Bratton is seeking to “alter departmental culture,” and the changes are evident in the number of vacation days that have been revoked from officers for low-level violations – decreasing to 10,000 days last year from over 20,000 in the two previous years under the old commissioner.

Bratton says his predecessor’s harder line on low-level misbehavior “hurt morale,” and maintains that he hopes to change officers’ attitudes about their jobs and, in the process, their attitudes about the people and neighborhoods they serve.

The changes come at a time when the department is under pressure to address the anger and frustration about excessive force and corruption that have fueled antipolice protests for more than a year in the city.

Last week, the NYPD garnered national media coverage again after former tennis star James Blake sustained lacerations and bruises after being tackled and detained for ‘looking like a black guy’ officers were searching for.

Bratton seems to be attempting to rationalize that treating officers differently will mean that they will in-turn treat civilians differently, but this line of thinking does not necessarily follow. Shifting to a more discretionary disciplinary policy presents risks to a department historically plagued by corruption that grew out of a culture of tolerance regarding the actions of officers in the first place.

On the minds of New Yorkers’ however, is whether or not the desecration will apply to individuals not adorn in blue costumes? A former state appellate judge who led a commission that investigated police corruption in New York in the 1990s, Milton Mollen said, “If the rule makes sense, then the rule should be there and be applied to everyone.”

Officials argue that the policy mirrors the ones now being deployed on the streets on New York, and say that while arrests, summonses and street stops made by officers have been declining in recent years, they dropped dramatically after Bratton took over the department.