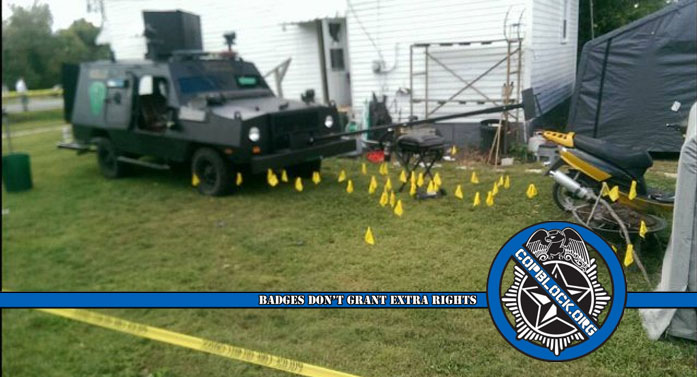 SHELBYVILLE, INDIANA – I received direct contact from Miah, founder of Indiana CopBlock regarding how to get an unfolding story out. Miah and I got to work together for the opening of the First Church of Cannabis a few months ago. I told Miah to write the article and I would toss it up on the website for her. Without further discussion, I give you Miah’s write up she titled “State Terror and Murder”. At approximately 8:20pm, on the night of September 19th, officers from the Shelbyville Police department were dispatched to a home in the 800 block of West Washington Street in response to a call of a dispute between two neighbors.

Over the course of the next several hours, the police laid siege to the home of Jerrald and Pamela Wright. At approximately 5:30 am, Jerrald Wright was shot and killed by the police.

According to the officers present at the scene, they had made contact with the reporting citizen (name withheld) and were preparing to leave the scene when Jerrald appeared on the porch of his home waving a gun around in a reckless manner, before fleeing back inside. His wife Pamela then fled the residence, having escaped from Jerrald and ran to a neighbor’s home for safety. At this point, the officers secured the perimeter of the Wright household and called for backup.

After attempting unsuccessfully to establish contact with Jerrald via phone, the police resorted to a loudspeaker in the early hours of the morning. Jerrald continued to refuse contact. The police then sent a communications device, into the residence. This “entry-robot” is designed to allow officers to listen and speak with the subject. Jerrald reportedly shot the robot twice with a “long gun,” disabling it.

The police then claim that they continued attempting to establish contact throughout the early hours of the morning, to no avail. At 5:30am, Jerrald exited a door, brandishing a hand gun, fired two shots at the Shelbyville Police tactical vehicle. He then pointed the hand gun at the police officers, at which time the officers shot Jerrald. Jerrald went down and was transported to a Major Hospital in the area where he was pronounced deceased.

The above is the official account of the incident from the State Police.

It is also, from start-to-finish, a complete lie.

Every fact presented above by the police is directly disputed by all eyewitness testimony from neighbors who viewed the events of the evening as well as from Jerrald’s wife Pamela and their son.

Here is the truth;

For several months, the Wrights had been filing complaints with the Shelbyville Police concerning illegal activities involving violence, the cooking of meth-amphetamines and the sale of illegal drugs on the part of their neighbors. Some of the alleged drug-transactions even occurred on the Wrights’ property. For months, the police did nothing about this. The criminal neighbors responded to these allegations by calling the police themselves, reporting Jerrald for everything from disturbing the peace, to trespassing, while Jerrald was simply sitting on his porch or doing yard work.

The Wrights claim to have in their possession video-footage of police presence during several of these illegal drug-deals, and even accepting bribes from the criminal neighbors. Jerrald filed complaints against the officers who kept showing up to harass him on bogus grounds. In spite of these official complaints, instances of harassment of the Wrights by the Shelbyville police occurred on over 80 separate occasions, over the past several months.

Fed-up with this rampant police misconduct and obvious corruption, Jerrald began making contact with the FBI for help.

This brings us to the evening of September 19th. Following an argument with Jerrald, the drug-dealing neighbors contacted the police on their payroll to report him for “trespassing.”

Several minutes later, Jerrald came back downstairs. He stood several feet away, behind Pamela and well within the house. He had a .44 magnum revolver holstered on his hip. He gestured to the police with his off-hand, saying that he would be pressing harassment charges against the Shelbyville Police department on Monday morning.

Seeing the gun, the police then escalated the situation by drawing their weapons, at which point Jerrald fled upstairs. The police then ordered Pamela to leave the residence. She complied with the officers’ orders and walked to a neighbor’s house. The officers then left the porch and began attempting to call Jerrald on the phone. Both Pamela and her son repeatedly attempted to explain to the police that Jerrald was an old man, who was not very tech savvy and had constant trouble working his cell-phone. But, the police would not listen to the Wrights. Moreover, Jerrald had already clearly stated his refusal to speak with the police in the absence of a warrant.

After several hours of calling Jerrald and shouting at him over loudspeakers, the police sent an entry-robot into the house which Jerrald shot and disabled. It is unknown which of the two guns at Jerrald’s disposal he used to do this; his shotgun or his .44 magnum revolver.

Throughout the night, Pamela and her son continued to beg and plead for the police to please let them try to talk to Jerrald over their bullhorn or loud-speaker. The police continually refused.

The officers then fired several flash-bang and tear-gas grenades into the house. Neighbors reported hearing anywhere from 10-to-12 explosions.

At approximately 3am, Miah Akston, a representative from Indiana Cop-Block, arrived and began interviewing the Wrights within earshot of the police officers. The police then finally allowed Pamela Wright and her son to record a few messages for Jerrald, which they played over their loudspeakers at a much lower volume than their own messages, ostensibly to convince Jerrald to come out of the house. (Recognize here, that Jerrald is an old man and hard of hearing.)

Sometime later, police affixed a direct-line phone to the inside of the front door of the house, and started asking Jerrald to come downstairs to the front door to get the phone and talk to them. He never came to the phone.

Hours later, at approximately 5:30am, the police entered the house. Over twenty shots were fired by the police. The police waited a full three minutes as Jerrald was bleeding out, to so much as call for an ambulance. When it arrived, two officers then dragged an unmoving Jerrald out of the house by his feet. They dragged him across the porch, down the porch steps and across the lawn to the ambulance.

Jerrald was taken to a nearby hospital, where he was pronounced dead.

This link leads to the official State Police account of the incident: https://local.nixle.com/alert/5495819/

(The State Police took charge of the scene after it became clear to them that the Shelbyville police department had bungled it.)

On that page, the particulars of the incident are arranged into short-paragraph blurbs. Each and every one of these blurbs is directly contradicted by eyewitness testimony from citizens who were present for the events of that night.

Everything from Jerrald allegedly walking out onto his porch waving a gun around in a “reckless manner,” when he was actually well-within the house, with a gun holstered on his hip,…

…to Pamela “fleeing” from Jerrald’s clutches, when in reality this elderly woman, (who does not walk very well and hence could not have “run” anywhere) was merely complying with the police officers’ order to leave the premises,…

…to the completely ludicrous and repeated attempts to contact Jerrald via telephone and loudspeaker, as if this were a hostage situation rather than the plain-and-simple harassment of a man who had already clearly stated that he would not talk to police without a warrant, which, oh by the way, the police did not have at the time. The status of that warrant is still in question.

It is clear that every single feature and facet of the official story is disputed by everyone present who was not a member of the offending police department.

So, why is it that every news outlet reporting on the story is merely reciting the official account of events provided by the State Police?

A local television news source Wish TV 8, was present at the beginning of the events of the evening, but left before anything violent took place.

Local Shelbyville radio station “Giant 96” however was present for everything that happened that night and the following morning. In spite of this direct access to the eyewitnesses, all of whom are contradicting the State Police’s version of the story, Giant 96 is also merely reciting the police’s official account of events.

Here we have a clear case of police corruption, misconduct and the blatant harassment of the citizen who was bringing it to light. Said citizen finally told the police that he would be officially pressing charges, and that citizen is now dead.

It is also clear that both the State Police as well as the mainstream press are complicit at this point in these acts of terrorism and murder on the part of the Shelbyville Police department.

What happened to due-diligence on the part of the press, much less the overseers of police actions and internal affairs at the State Police?

We’re calling for transparency. Moreover, we want retractions from these local news-outlets, particularly Wish TV 8 and Giant 96, until they’ve done at least the bare minimum of their journalistic duty and acquired eye-witness testimony of this clearly suspicious death.