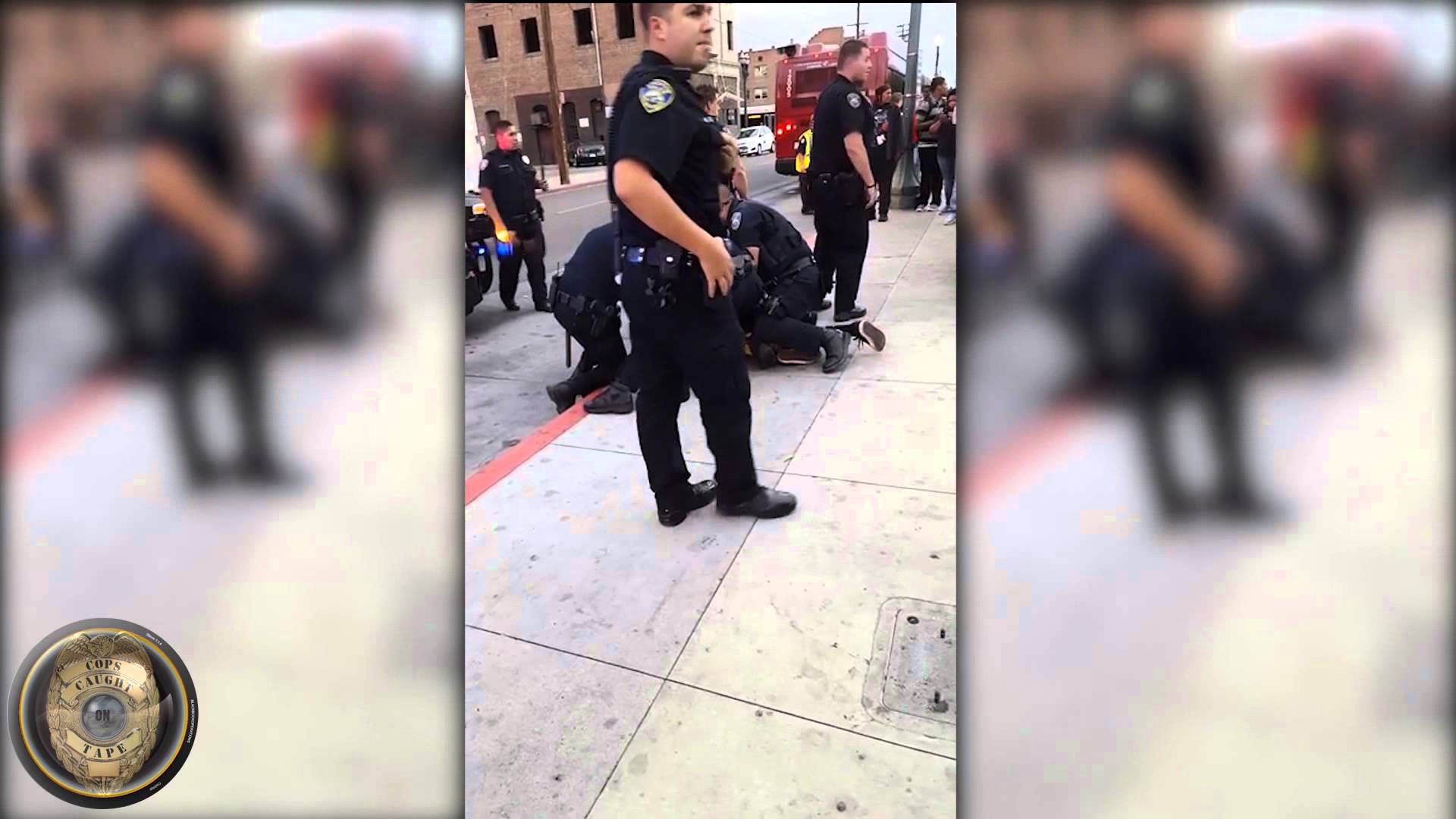 This post was submitted by Allen Hall, via the CopBlock.org submissions page. He states:

My general thoughts after doing a ton of research… I have been just stunned at all I have found out… the public isn’t aware of the depth of the national problem. I saw a news story the other day of an unfortunate escalation of a jaywalking stop of a 16 year old boy getting off a bus in Stockton California (original video embedded below). When I watched the video all I could think was how totally absurd the situation was… dominate at all costs. Escalate at all costs. Response so over the top for the crime. Give the kid a warning if he is uncooperative and let him go.

This serves no useful purpose as the response is far more damaging to the community than the crime of jaywalking. I posted this opinion and was immediately put on the spot with a comment to my post… “What is absurd, the resisting kid? Or the cop doing his job and dealing with a high tense situation the appropriate way?”

We as a society have lost our ability to apply common sense. We are overfed military force as diplomacy worldwide and at home we are overfed that police as a paramilitary force is the way community policing was meant to be. If you think about the crime of jay walking the response wasn’t appropriate… the police are not chartered to dominate… they are not a military conquering force… they do not need to win every battle no matter how small at all costs to the point of violence. Common sense… it’s a kid… he is a trained cop. Why is a violent confrontation even an option? Just let the kid go with a warning… the expense alone to handle this is absurd. How is this protecting and serving the community? An even more troubling question arises, why is it OK for a cop to batter a child for being uncooperative… yet if it was a parent or teacher they would be arrested immediately. Why do we allow police a license to exceed the law of the land and grant them occasions to ignore the constitution? How is it that we have largely been brainwashed to accept that police can be legal executioners, killing unarmed and minimally dangerous citizens in cold blood… and rule them justified? Simply amazing… but this is just a peak of what has been happening…

What the public is missing is the increasing criminality within the nation’s police forces. Using the national arrest statistics published by the FBI and reports to the DOJ by a well-known national expert, Philip M. Stinson, JD, PhD, of Bowling Green State University, a few things jumped out at me… 6,724 officers were arrested and charged with a crime nationally between 2005-2011. Some of these arrests for crime categories were at a much higher rate per population than the civilian statistics… i.e. civilian arrests for violent / forcible rape nationally in 2010 ran 7.42 arrests per 100,000 people… however the rate at which police officers were arrested for violent / forcible rape ran at 18.156 per 100,000 officers… that’s 244% of the national average in total for that category!

I won’t go into all the statistics but there is a lot more to be concerned about. The national trend has been showing an increasing criminality within the police forces in this country, something now being tracked by private groups like the CATO Institute in Washington DC. The US Government does not keep track of any of these statistics.

Which is a problem. With no external oversight and no national metrics for transparency, the public trust is in the hands of the agencies in questions oversight process and is often in a culture of silence and cover-ups. A process that leads to only half the rate of criminal charges being filed and, if convicted, on average the officers receive more lenient sentences that civilians convicted for the same crime. So the problem of police brutality is just the tip of the iceberg. In truth, if an individual wanted to maintain a shadow life as a criminal … the best job he could land would be a police officer. To fix this the agencies need to adopt external oversight and prosecute misconduct with stiffer penalties than what civilians receive …otherwise you are building in criminality into this country’s police forces.

To hear the police cry out that “cops lives matter”, it comes off as an excuse for bad behavior in one of the safest years for being a cop in history. No one other than a miniscule fraction of a percent of stupid people has said anything like cops lives don’t matter…The 99.999999% of everyone else have never said that cops lives don’t matter… now in saying that, this doesn’t mean cops have an excuse to trample others rights. It is not a choice of one or the other … that’s a serious failure in logic to go down that path.

The USA has a great constitution that provides the framework of which our laws are written against. Somehow there has become a widening gap and disconnect within police doctrine as they align with our constitutional rights. There is no acceptable excuses for gross violations of anyone’s constitutional rights. To grant an exception is just undermining what this country has stood for. There is a time for the use of deadly force but the ongoing militarization of the country’s polices forces has breed a culture of us vs. them. Where the options to diffuse any situation are far too often deemed weak and unacceptable.

This failure in logic provides a twisted justification where the only response available is an escalation… The police believe they must dominate any citizen that takes issue with them in a situation. They do not treat citizens as equals. They clearly treat citizens as inferior, which is demonstrated by the rapid escalation of the use of deadly force. The Us vs. Them mentality has made it internally acceptable, within the various police agencies, to disregard the rights of citizens to the point that accountability has been lost and traded for silence and cover ups.

The police have no more rights than the citizens around them which clearly isn’t understood by many of the police seen in the media today. This is a police problem… The truth is that if the police agencies want to correct this then they need to step up and clean out the bad apples from their bunches and write their policies in accordance with citizens constitutional rights. This may not be the easiest thing to accomplish but it’s the right thing to do… and to do less is just accepting that we no longer have a working constitution supported by our government and its agencies.

It really is about doing the right thing because you know what the difference is from right and wrong and there is clearly a choice. It is about the public getting what they pay for; police preventing crime not committing crime. It’s about the rules that form the foundation of our country, reaffirmed by the people, reinforced by the supreme court’s oversight, it is about accepting nothing less than what we are guaranteed. It’s about an expectation in this country and acknowledgement that it isn’t easy but it is one of the things we do best, making the difficult attainable, raising the bar high and yet exceeding the requirements. Don’t accept anything less, there is no reason to, all it takes is commitment to a goal. Given time and this commitment there is no doubt it is attainable. Hold the bar high as that’s where it needs to be.