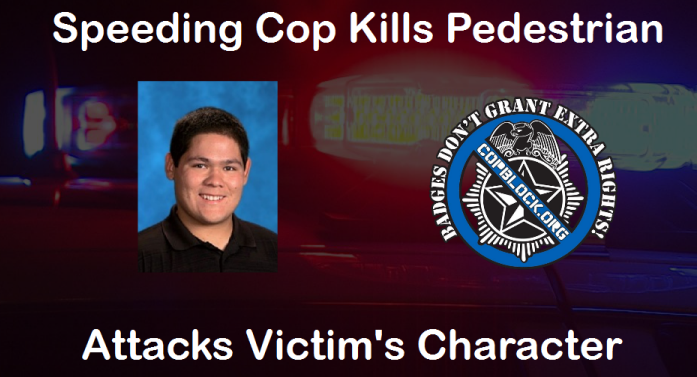 The officer, who is not being named at this time, works for Rialto Police Department. According Rialto Police Captain, Rand De Anda, the officer was driving to a non-emergency call about a suspicious person. While driving, the officer struck Camacho, causing him to suffer major head, neck, and body trauma.

The officer, who failed to engage his emergency lights and siren while barreling through a poorly lit neighborhood at night, will not face any charges for killing the teenager. In fact, the police have already blamed the dead teenager for the events of that night.

Captain Randy De Anda said that Camacho was ‘outside a crosswalk’ and ‘wearing dark clothes’. The police department even claimed that ‘alcohol may have contributed’ to the accident. However, there is no evidence to support that accusation.

According to Camacho’s brother-in-law, Michael Gonzales, they were crossing the street when Camacho was hit. He also stated that the officer was driving 15-20 mph above the posted speed limit.

(We) Looked both ways and didn’t see nothing. So we proceeded to walk. The cop car just wham, swipes him out.

Captain De Anda stated that “The officer saw a pedestrian dart into the street to his left, and when he turned to look, that was when he struck Camacho, who was the second pedestrian.”  Given the facts of the case – a speeding cop, no lights, no sirens, and the officer admitted to not looking at the road at the time of the accident, how can the officer not even face the possibility of charges? Feel free to leave messages on their official Facebook page, demanding the officer be fired!

Unfortunately, police officers have a long history of killing pedestrians and blaming the victims, and never facing any charges for their crimes. In a story I brought you back in July, one officer was traveling 100+ mph at night, with no lights or siren, when he struck and killed 20-year-old Fredi Morales.  The cop was never charged, even though the dash cam video shows the officer swerving and driving recklessly. You can read the story and watch the dash cam video here.

In another example of double-standards, a wife of a police sgt. was drunk when she struck and killed an elderly man on a bicycle. Because she was married to a cop, she never faced any charges. That police department also blamed the victim in the case.