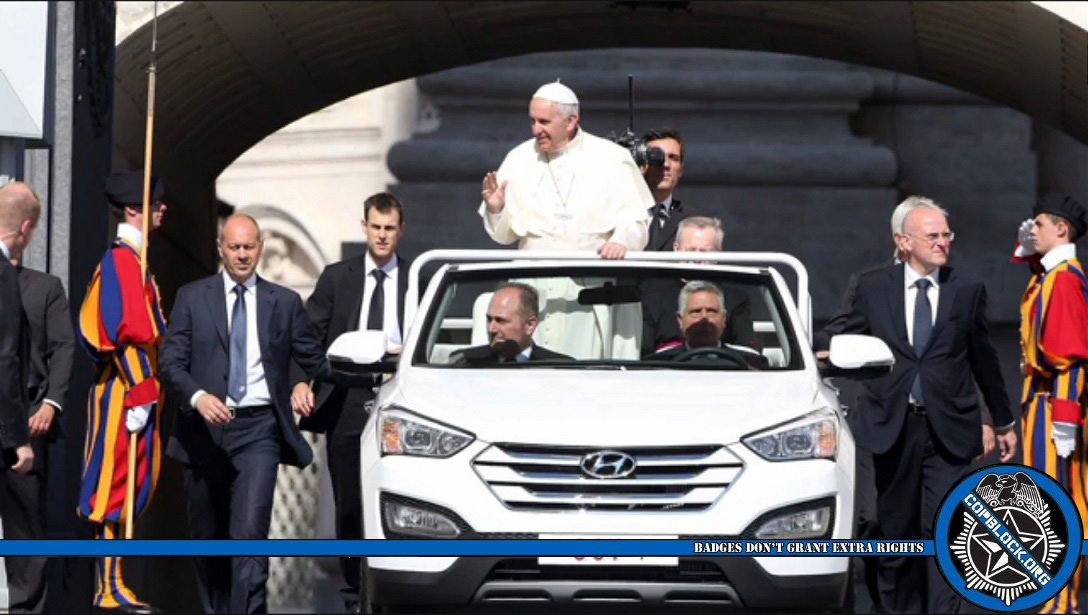 I had to laugh when I saw this NBC News headline, ‘Warning on Terrorists Impersonating Cops Issued Before Pope’s Visit,’ pop up on my Facebook news feed only minutes ago. It wasn’t a hearty, ‘I’m in good spirits’ laugh, it was a ha-ha kind of sad laugh you get when you realize the irony of a thing. Your Holiness, I got news for ya: ALL cops are terrorists by definition.

We’re going by the book on this one, and the book says (in my words):

The systematic use of violent acts especially as a means of coercion to frighten the people, generally, for a political purpose.

I checked my Black’s. I referred the question to Bouvier. I even consulted with Webster. We all came to the same conclusion as to the basic definition of terrorism. I even asked the FBI for their thoughts on the subject.

I know there are some people who need to have things spelled out for them, so I oblige. The rest of you who get it, please Like and Share and feel free to go on about the rest of your browsing because you already know what I’m going to say. You yourself have said it uncounted times, no doubt.

The police represent the domestic military arm of the criminal State and all its failed politics. Anything the political class, or the so-called majority, sees fit to regulate (read: criminalize) becomes a potential death sentence for anyone, knowingly or not, who ‘breaks the law.’ The police use the threat of violence with their trigger fingers just itching to squeeze off a few rounds into your disrespectful ass. I don’t think I overstate this point when we have a citizen death toll increasing year after year at the hands of police while at the same time direct violence against the police is at all time lows.

That last part is important when having any discussion that might relate to the ‘war on police’ because the core argument of the statist cop sucker’s ‘war on’ cry is always based on some mythological attack on something or someone.

I know that you’re going to argue that the police are there to prevent crime. But the truth refutes your assertion: The police arrive at crime scenes some minutes, hours, days, later. Sometimes they even manage to catch the perpetrator of a real crime. But the police do almost no actual crime prevention at all. To argue that they do is to take the view that most people are likely to commit a crime at any time but the only reason they really don’t is because it’s against the law.

However, the police do enforce laws which real criminals do not obey.

So it follows logically that what police do is: enforce laws against people who don’t break laws.

Most of the laws the average person can break are not real laws; they are in fact commercially written code violations for the misuse of city/state/federal property. Driving too fast on their roads. Not mowing ‘your’ lawn in their neighborhoods. Indulging in vice in their city. Having the audacity to point out their crimes on their property. Real crimes are statistically rare, almost never stopped by police, and are often exacerbated by the violation of codes enacted by political fools and enforced by tools.

So the police are a heavily-armed gang using violence and the threat of violence to coerce good law-abiding people into following questionable laws foisted upon them by a small number of corrupt leeches, liars, thieves, and murderers called politicians. And it’s these same politicians who created the laws, dictate the enforcement of those laws, mete out the punishments for violations of those laws, and make a profit all along the way in doing so. They are not protecting anyone but their own criminal masters and their lousy stinking paychecks. And they are using terror to do it.

Yes, Your Holiness, ALL cops are terrorists by definition. If you see one in your review mirror or in any position to get behind you, turn off as soon as you can to ensure that he doesn’t. But I’m sure you’ll be safe if one of them jumps on your hood and starts shooting at the windshield like he’s a Mel Gibson stunt double in the latest Lethal Weapon installment; you have that whole God thing going for you and the bulletproof car will help, too. Welcome to Police State America, Your Holiness.