The following post was submitted by Danielle Kekoavia, via the CopBlock.org submissions page. 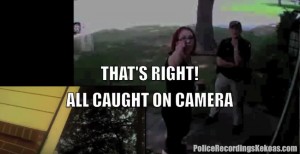 NORTHGLENN, CO — Three Neighborhood Services Code Enforcement Officers and a Community Service Officer from Northglenn Police Dept. were sent over to harass and intimidate Curtis and Danielle Kekoa, parents of six, all because the next door neighbor was being “ignored” and called the police to complain. That’s right—the neighbor called the police because she was being ignored by the Kekoas. And even more ridiculous, the Northglenn Police responded right away to the 911 call.

Since “ignoring someone” is not a criminal matter, Officer Gillette from Northglenn Police left the scene and later dispatched Northglenn’s “Professional Mediation Task Force” over to handle the private issue between neighbors by attempting unlawful entry, aggressively banging down the Kekoas’ door, yelling through the window, then “dragging” them out of their home and into a confrontation for over 45 minutes.The latest disturbance began on Wednesday, August 19, 2015 when Officer Tom Carlson and an unidentified Officer with Northglenn Neighborhood Services Code Enforcement showed up unannounced at the home of Curtis and Danielle Kekoa, then left a business card with “Please call” written on it. Less than 24 hours later, on August 20, 2015, four Northglenn Code Enforcement Officers were called to the next door neighbor’s home to have access to the Kekoas’ backyard by looking through the chain-link fence to find a “code-violation” of some sort. Upon arrival, a story about “pool noodles” was fabricated by the neighbor in another attempt to harass the Kekoas and force them into a confrontation because she was being “ignored.”

Shortly after peering and prowling over the fence into the yard where the Kekoas’ children play, two Northglenn Officers including a supervisor quickly stormed over to the home of Curtis and Danielle Kekoa and attempted unlawful entry through the front door. Immediately after the unlawful entry failed, the Supervisor aggressively knocks over 30 times then yells at the window saying, “I just wanna to talk to you! You don’t have to videotape me! Just come to the door!” Seconds later, she pounds on the door “a little harder” nearly ten more times to “make sure you heard it.” All of this activity is caught on camera from several different angles.

As observed by the four Northglenn Code Enforcement Officers, there were absolutely “no code-violations” at all, yet Stephanie Pelster, who identified herself as the Supervisor and “Professional Mediator” for Northglenn Code Enforcement, along with Officers Tom Carlson and Phil Stiebler with Neighborhood Services Code Enforcement—all dressed looking like bounty hunters with big badges and tactical gear—accompanied by a uniformed Community Service Officer named Michelle Soustek #438 from Northglenn Police Dept., came over to harass and coerce the Kekoas out of their home against their will to communicate with their next door neighbor.

This is a clear violation of the Kekoas’ First Amendment right to freedom of expression which is to ignore the neighbor, not to mention the use of excessive force when there was no code-violation, no crime, no probable cause and no warrant to justify such actions. The Kekoas’ right to have privacy and live peaceably in their own home has also been clearly violated, in addition to living with the fear of being intimidated, bullied and forced into a confrontation by the government whenever someone wants the police to do their bidding. Not only is this a complete waste of resources over a non-criminal matter, this is an absolute abuse of power by government code-enforcement employees who are trained to handle unsightly trash or overgrown weeds and tree branches, not complex relationships and private civil matters.

Throughout the entire 45 minute scene in front of the Kekoas’ home, Officer Tom Carlson repeatedly tries to pressure the Kekoas to take part in their “new program” which is designed to have them “abide by an agreement” with the neighbor. This meeting is supposed to take place while sitting at a table in a “controlled environment” run by government “facilitators” and trained “professional mediators” whose “job is to help” neighbors with issues such as a “lack of communication.” The Kekoas expressed repeatedly that they have no interest whatsoever in being “programmed” by the government and have no intention of going to any meetings with the neighbor.

Supervisor Stephanie Pelster also admitted multiple times to the harassment and apologized to Danielle Kekoa for “banging on the door, dragging you out of your home…and disturbing your peace.” By the end of the confrontation, the Northglenn Code-Enforcement “Mediation Team” acknowledged that the Kekoas “want to be left alone” and that the neighbor should be told to “mind your own business.” Regarding all the “busybody” behavior by the neighbor and not being able to live in peace at home, Supervisor Stephanie Pelster said repeatedly to the Kekoas, “That’s no way to live.” The Supervisor reassured the Kekoa family that the neighbor would be advised to “leave them alone and pretend that they’re not there” or to “build a privacy fence” so she doesn’t have to look in the backyard and start problems. But naturally, the neighbor disregarded the advice.

The Kekoas were also given business cards by each of the “Professional Mediation Officers” and were told that they could be contacted if there was anything that was needed. Supervisor Pelster extended a personal invitation to Danielle Kekoa to, “Call if you need anything.” Danielle Kekoa made multiple attempts to contact the Supervisor Stephanie Pelster, leaving at least three voice messages, but Pelster did not return the phone call. According to Officer Tom Carlson, email messages sent by Danielle Kekoa to Northglenn reportedly went to the spam folder and could not be accessed by any of the recipients, though they could see it on their spam folders.

Officer Tom Carlson was also left a message and returned the call. After speaking with Danielle Kekoa for nearly 30 minutes, Tom Carlson sent a letter to the Kekoas at their request saying in part:
“Based on our phone conversation, it is clearly evident you are not interested with being involved with any type of mediation between you and your neighbor. We as the City will not try to contact you in reference to mediation services from this point forward.”

(The recording with Tom Carlson and Danielle Kekoa will be released soon.)

As a direct result of the government getting involved with a personal and private matter, the neighbor’s antagonistic and aggressive attitude towards the Kekoas, along with her abuse of Police resources have only escalated since the Northglenn “Professional Mediation Task Force” arrived. Now the Kekoa family is being targeted even further by the neighbor and law enforcement for simply trying to live at peace in their own house. Attempts to file a complaint against the neighbor or the City of Northglenn with Officer J. Burke #445 have been ignored, mocked and disregarded by him and the Northglenn Police Department.

This recent incident in August 2015 is more evidence of a long pattern of harassment by the City of Northglenn against the Kekoas dating back to October 2011 on multiple false allegations of child abuse, Social Services investigations, anonymous “welfare” checks, threats of false arrest over “harassment” and more. Each frivolous investigation by the government was closed and unfounded because evidence does not exist for such false accusations. Yet no investigation has ever been conducted to look into the violent criminals who have repeatedly called the police on the Kekoas making false reports against them over the past four years. Furthermore, the Kekoas have received multiple death threats which they have reported and have not been followed up by the police which puts the family and the entire community at even greater risk since Northglenn Police officers refuse to serve and protect them. The Kekoas’ rights have been violated even further by not being offered equal protection under the law as the Fourteenth Amendment states. On Thursday, September 3, 2015, EXACTLY TWO WEEKS AFTER the disturbance over the neighbor and one week after the phone conversation with Tom Carlson, an Adams County Sheriff’s Deputy began knocking on the Kekoas’ door on multiple home visits. It is presumed that the neighbor is now using the Sheriff’s office to harass the Kekoas and force them into a confrontation since it didn’t work with Northglenn’s “Professional Mediation Task Force” earlier. But the Kekoas refuse to be forced into another confrontation—especially by the Sheriff on behalf of the neighbor!

The Kekoas plan to hold the City of Northglenn accountable for being unjustly targeted and for the pattern of harassment from 2011 to the present day. And the only way to hold the city accountable is to release the video evidence to be examined by the court of public opinion since law enforcement is completely incompetent and can’t be expected or trusted to do the right thing. The community in Northglenn expects every “Service Officer” to operate within the law and show every resident in town the same level of Courtesy, Professionalism, and Respect to ensure we all have a safe and peaceful place to live.

THANK YOU COP BLOCK! YOU ROCK! TYRANNICAL INCOMPETENCE = ASTONISHING VIOLATIONS OF CIVIL RIGHTS. THIS IS WHAT HAPPENS WHEN GOVERNMENT DOESN’T KNOW ITS PLACE AND INTERFERES WITH AND ATTEMPTS TO REGULATE COMPLEX PERSONAL RELATIONSHIPS WITHOUT CAUSE AGAINST ONE PRIVATE PARTY ON BEHALF OF ANOTHER.