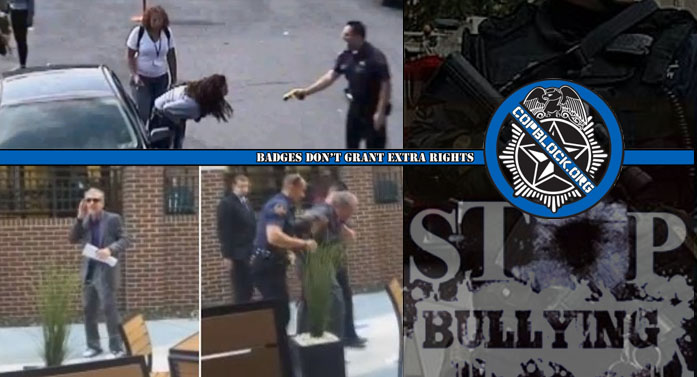 We all knew that kid in school. The one that was just a plain bully. The one that always picked the smallest kids out to assert his dominance. Usually a smart kid with glasses or the slow kids were the bullies’ favorite targets. There were always people who hated this kid, but would never say anything. I was never that kid. I was the prick that didn’t give a damn and would smack the bully’s hat off his head, or tell him to pick on someone his own size. I was never that big in school, or tough, but I was not opposed to standing up and taking a beating for the sake of protecting the less able. I guess that is why I am so good at cop blocking. It’s the same principle in just an older and wiser body (and much bigger). I really hate violence. I went through the fight-’em-all phase and I’m over that. Most of us are not the kids we were or even the people we were a few years ago. We all learn and grow. I try to be the bigger person today. I either out-talk or ignore an aggressive person. I think it’s a win to let him scream and yell, and for me to remain composed.
But when it comes to the small, weak, and less fortunate being picked on, that’s my breaking point and I just want to bust the bully in his head, as I did in high school.

Allentown PD are just plain high school bullies. Bullies that decided to get badges to keep up the work of picking on the less fortunate. They do not serve or protect anyone. They run around unchecked. At least once a week I am forced to type yet another story of old men getting beaten or children being picked on. It gets hard to keep you all from being desensitized to the headline “Allentown.” I want to point out, though, that these are people, not headlines. They are scared every day of the ones patrolling their town.

I have spoken to so many people in that town who truly are afraid. Afraid of the police. Good people, some without any history with the law, are living in fear to leave their homes. The police there are so bad that they cannot keep a police chief for more than a few years! Their officers are literally the most unaccountable I have ever seen. They do not even try to look like they care. Lawsuit after lawsuit (12 so far this year) and the powers that be respond with “no comment.” How can this be happening in America? I am a writer for Copblock and I thought I’d seen it all. This by far is the worst I have EVER seen. We have been a part of city council meeting where parades of community members, victims, family members, and even scared CHILDREN address them begging for HELP. Begging them to stand up as the ruling parties and fire someone, anyone, to make this end. The council made the sick and laughable decision to have the police “reevaluate training techniques”. In the wake of this stunning call for “reevaluation” there have been several other incidents caught on film. After writing a story of a child handcuffed and hauled away for jaywalking, I have been sent ANOTHER video. In traditional fashion this is more shocking than the last. This time a mentally handicapped elderly woman. She was rude to one of these Robo-cops, so naturally this bully had to run after her, grabbing and roughing her up. THANK GOD there were people there to stop the cop. As you can see in the video the cop was reluctant to allow these citizens to de-escalate this beat down in progress. Once the coward realizes he is being filmed, he stops his actions against this defenseless old woman and turns his annoyance to the Copblocker filming! The film-er was a member of Lehigh Valley Copblock. Talk about right place at the right time! The cop tries with remarks and angry gestures to scare off our buddy, but he was out of his league! “Gonzo” (as he likes to be called) never took the camera off of the aggressor. Thankfully, for this elderly woman’s sake! With all of these cases caught on film it’s only a horrifying guess what’s happening off camera!

The police supporters in Allentown have made attacking our character and motives a full time job. They have claimed WE START these instances to get a good movie out of it. They have even claimed that if we would stop filming their cops these bad things would not happen. WELL FUCK THEM! I usually don’t feel the need to express myself through cursing but really it’s gotten to that point here. FUCK YOU AND YOUR HORRIBLE DEPARTMENT! The victims don’t like you, or your “Heroes” and as another story I just did points out, neither does the rest of your community!

Here is my request of ALL of you reading this. Let’s make history here. Flood these animals with calls all day Wednesday September 23 and  Thursday September 24. Light up every line they have with demands for justice! Call the DA and fill his voicemail ALL DAY. Use Facebook and refill their wall with the truth (since they like to have their supporters ‘like’ and comment on everything to appear as if people like them). This historically unaccountable department needs a historically high response. Call for Robert Busch’s badge, and for the cops caught on film to be suspended! Let’s make this happen!