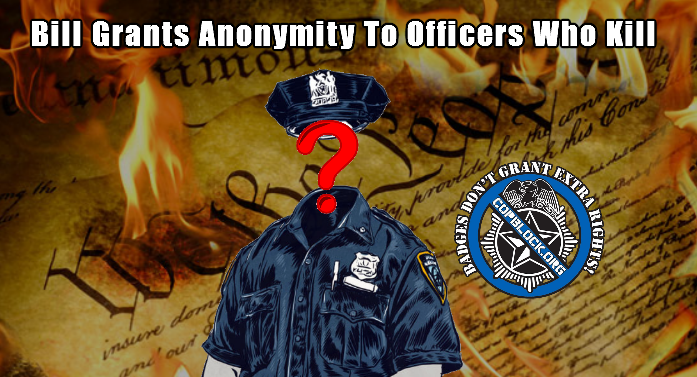 Imagine that another unarmed man is gunned down by police officers. As it usually goes, no charges were filed. If you live in Pennsylvania, you’ll never find out who the officer is – ever. That’s the gist of a bipartisan law making its way through the General Assembly.

Even after an investigation has concluded, the officer’s name can only be released if he/she is charged with a crime relating to the discharge of a firearm or use of force.

Pennsylvania’s Fraternal Order of Police is rallying around the bill, which was introduced by State Rep. Martina White, trying to pressure lawmakers into supporting it.  They say it is necessary for this law to pass because “that policing has become more dangerous amid the public backlash after high-profile instances of use of force, especially against unarmed black men“.

“We’re in a different world than it was back even just a few years ago,” Les Neri, president of the Fraternal Order of Police Pennsylvania State Lodge, said during the rally in the Capitol on Monday. “Because of that, we have to make sure that the men and women who are out there putting their lives on the line every day in the protection of others are protected.”

The President of the ACLU of Pennsylvania has already voiced his displeasure for the bill, stating:

“We give our police officers incredible power, including the power to use deadly force if necessary, and when we give them that power, they need to act transparently.”

“This is legislation that shows that we’re going to be proactive rather than reactive. We’re not going to wait for an incident to happen,” said John McNesby, president of the Philadelphia Fraternal Order of Police Lodge 5. “To have a sitting administration and a (police) commissioner want to release an officer’s name within 72 hours — just merely to satisfy the public — does not make sense.”

If this bill passes, it will be a major setback in police accountability and civil-rights. No longer will a cop need to fear any type of reprisal for his/her actions. I have seen too many articles about police being found ‘not guilty’ on charges of excessive force and murder. However, the victims and their families still had the option of filing civil lawsuits against the officer and the department. If the bill passes, that will be a thing of the past. You may never find out what department the officer worked for. You will never find out the officer’s past history of shootings, excessive-force complaints, or even what Internal Affair’s investigations the officer has been the focus of. Another side-effect of a law like this, is that it will cause Pennsylvania to be the ‘gypsy police’ capital of the US. Troubled cops can simply relocate to any department within the borders of Pennsylvania and continue their assault against the rights of the citizens.

According to campaign finance records, Rep. Martina White receive several thousand dollars in campaign contributions from the same police unions she’s now trying to protect.  She has also received sizable donations from other Unions and the Union’s Attorney’s.  With the FOP’s help (and the endorsements of other Unions), Martina White won the special election, and even celebrated her campaign victory at the FOP’s HQ. It’s no wonder why Rep. White would sponsor a piece of legislation that hurts everyday citizens – it’s political payback to the FOP for helping her to get elected. It’s unfortunate that this ‘win’ will be bough and paid for by the needless killings of our citizens at the hands of police – all thanks to Rep. Marina White.

Please email / call your State representatives and let them know you DO NOT support this bill. You can find your Legislator by clicking here.

55
SHARES
FacebookTwitterGoogleRedditTumblr
DiggLinkedinStumbleuponMailPrint
You Can Support Cop Block by shoppping on Amazon using the banner below:
BANNERS ARE CLICKABLE