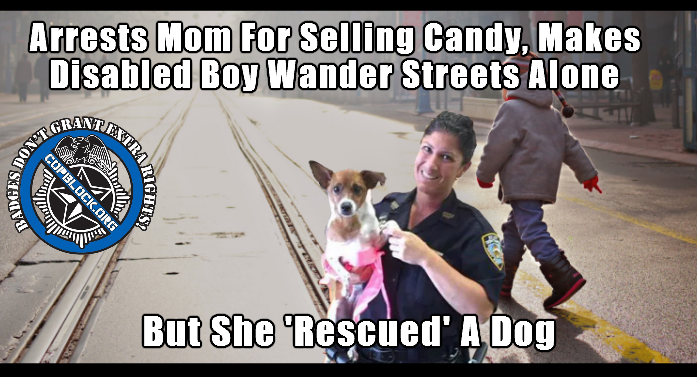 The mother of a special-needs child who was arrested near Bryant Park for selling $1 chocolate bars as part of a school fundraiser is now suing the NYPD.  Bernadette Roberts is suing the NYPD and the arresting officer, Stephanie Hlapatsos, according to DnaInfo, accusing them of neglecting her 15-year-old, special-needs son after she was arrested. According to the suit, her son was left to wander around on his own for up to four hours in frigid weather.

Any statement the NYPD has made on the issue cannot be located at the present time. However, they did take the time to flood social media with this picture of Officer Stephanie Hlapatsos, who ‘rescued’ a lost dog.

Roberts’ 15-year-old son was using the restroom at a nearby pharmacy when she was hauled off to jail for ‘selling candy without a license.’ Roberts’ son, whose name is not being released, suffers from an anxiety disorder and attention-deficit disorder and has learning disabilities. According to the lawsuit, the boy’s mental and emotional capacities are like those of a 7-year-old child.

During the four hours in which the boy was left alone, he frantically searched the area for his mom. Finally, a police officer at the Midtown South Precinct stationhouse allowed Roberts to call her son.

“He was hysterical, crying, ‘Where are you? What happened? I can’t find you. I’m looking all over the place for you,’ Roberts told city lawyers during a preliminary hearing in 2014 after she filed a notice of her intent to sue the NYPD. The NYPD is being accused of not taking the proper care to secure the dependent child of a parent who was arrested. According to the lawsuit, NYPD rules require an officer to try to find a relative or friend who can care for the dependent child.

When Roberts was arrested, she begged and pleaded with the officer to wait for her mentally-disabled son. However, the officer refused. The charge of ‘selling candy without a license’ was eventually dropped.

Officer Stephanie Hlapatsos has previously been the subject of other lawsuits. In 2014, the city paid $13,000 to settle one lawsuit. Apparently Hlapatsos had arrested a street vendor for selling fruits, accusing the vendor of not having a license. However,  the vendor was properly licensed through the city. It seems the officer didn’t take the time to verify anything before she arrested Marie-Rose Goba.

The NYPD has had one scandal after another. Just this year alone, dozens of officers have been arrested for rape, sexual abuse, child abuse, sexual assault, falsifying arrest reports, drug charges, and many more crimes.

In one of those cases, the NYPD’s officers are accused of assaulting an autistic teen. According to a lawsuit filed in Manhattan Federal Court, officers with the NYPD brutalized and beat an autistic teenage boy who was leaning up against a car outside his family’s house on Bainbridge Avenue in the Bronx. The suit claims that 18-year-old Troy Canales (17 at the time) was “just chilling” when Bronx officers threw him to the ground, smashing his skull against the concrete, and then punched him for no legitimate reason before arresting and ultimately releasing him without any charges or explanation.

If you are wondering how a woman, Officer Stephanie Hlapatsos, can care less about leaving a mentally-disabled child wandering alone, perhaps it’s the environment created by all the ‘bad apples‘ in the NYPD. It seems to foster an atmosphere where civil rights are ignored, morals no longer exist, and the citizen is no longer seen as a friend, but as the ‘enemy’.