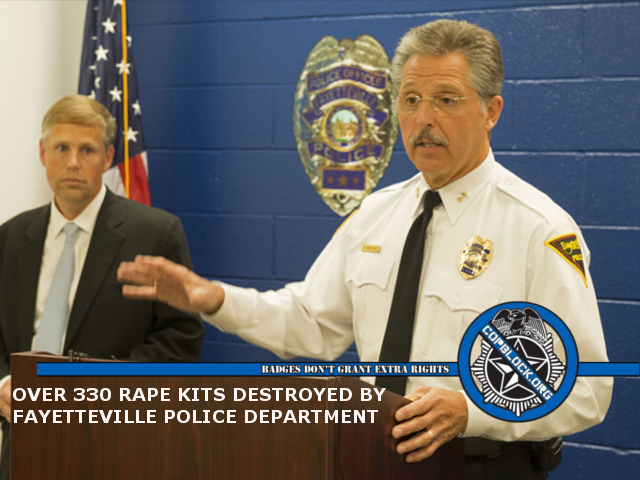 Rape kits that were evidence in 333 cold cases have been reported to have been destroyed by Fayetteville Police in North Carolina.  An audit discovered the destroyed evidence as well as discovering that the evidence was destroyed to make room for other evidence.  The kits were collected from between 1995 and 2008.  This was all reported by current Fayetteville Police Chief Harold Medlock during a press conference on Monday.

The audit was done in June of 2015 and was ordered after the establishment of a Cold Case Sexual Assault Unit and the review of open sexual assault cases dating back to the 1990’s.  It was discovered then that some older kits were still on the shelf while others had been destroyed.  Of the 333 kits destroyed, over half were for cases that were still open.  The other cases involved non-stranger assaults, those in which victims recanted their statements or could not be located.  52 cases were ones in which the defendant made a plea deal and those kits were only required to be held onto for 3 years.

The decision to destroy the kits was made in 2006 before there was a law barring the destruction of the kits.  That law became active is 2009 and made it a felony to destroy rape kits.

In the press conference, Chief Medlock stated, “I’m distraught, I’m frustrated, I’m angry that one person won’t get justice because of our practices.  We can’t put this issue on anyone but us.”  In fairness, it must be noted that the destruction of the rape kits was done under a different administration in which Medlock was not the chief at the time.

Even though the destruction of the kits happened before it was made a felony to destroy them, this practice shows a lack of care by police to protect and serve.  The victims of these sexual assaults are just numbers on a case for these officers and whether the cases are solved or not are of no consequence to the officers working the cases.

The chief’s feelings of frustration over the destruction of these kits is more than likely genuine seeing as he was not chief at the time.  I am glad to see that he is willing to stand up in front of the press and the public and admit that the loss of these kits was wrong and will likely result in someone not getting justice.  I do believe he is only looking at this from the point of view of the sexual assault victim and not a broader picture.

The actual victims of the assaults are not the only possible victims in this department’s actions.  There is the question of the 52 cases that the suspect pleaded guilty.  DNA evidence is exonerating more and more people who have been forced to make pleas when in fact they were not the ones that committed the crimes.  How many of these 52 suspects may have been coerced into making a false confession based on the interviewing officer telling that suspect that they already had their DNA evidence from the victim?

The events of this past summer of a few officers being shot and killed showed police go all out to solve those murders while we have thousands of other cases across the country that police drag their feet on and take their time getting to since it’s not one of their own.  As more of these stories come out, it is evident that only blue lives matter to our supposed protectors that we call the police.