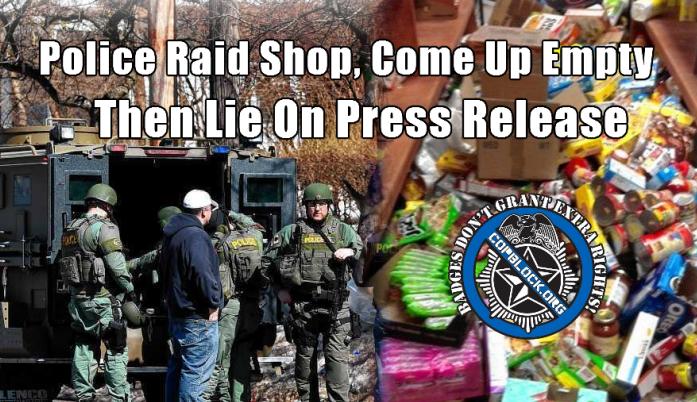 Earlier this month, police burst into a business in Syracuse, New York, demanding to know where the “Spike” was, according to Owner Ezzideen Alharbi of the Lodi Market. Though the employees denied having any Spike, the officers began raiding the shop – without a warrant – and throwing merchandise on the floor, breaking anything in their path.

Once the raid was over, two employees were cited with a misdemeanor for having untaxed-cigarettes. Thankfully, nobody was murdered over the untaxed cigarettes, like Eric Garner was.

As we’ve come to learn, police do not let the truth stand in their way. When the Syracuse Police issued a news release, Lt. Eric Carr stated:

As it turns out, the Spike and stun gun found during the search, was located at a different business, owned by a different individual.

As far as the damage sustained during the raid, Alharbi could not provide an exact dollar estimate, but he claimed police seized cash and destroyed merchandise and equipment. According to Alharbi, the officers ripped cell phones from their cases and threw them on the floor, tossed merchandise into the aisles and stepped on it, destroyed his safe and cashiers despite employees’ offers to open both safely, seized an “excessive” amount of cash and documents unrelated to the search, and destroyed camera evidence of the raid by ripping a hard drive from the wall and dropping it into a mop bucket.

Court documents later showed that no “Spike” was found at Lodi Market. Alharbi said in an interview this week with Syracuse.com, that the raid is only the latest example of what he sees as hostility from the neighborhood and police who confuse him and his shop for Al’s Market (which is where the police found the Spike at):

Below is the full news release. Notice how the police imply that the Lodi Market was involved in the sale/possession of Spike?

As a result of these two search warrants 39 packets of synthetic marijuana (Spike), numerous cartons of untaxed cigarettes, a “stun gun”, and over $32,000 in US Currency was recovered.

Arrested in this case were Mohamed Salem Meki age 42, charged with intent to sell untaxed cigarettes.