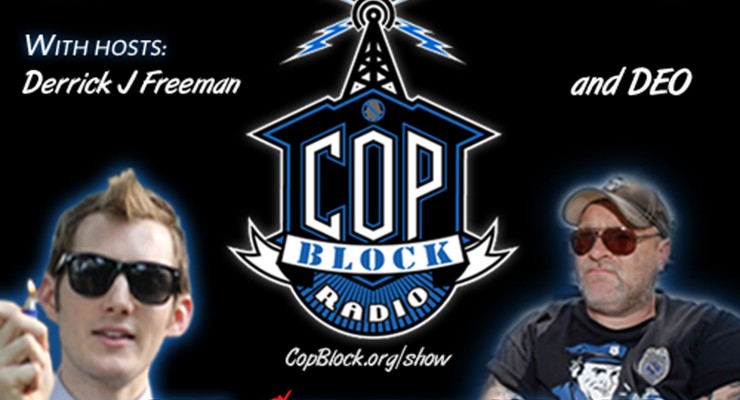 CopBlock Radio this week covered the Cincinnati police using a taser on a man simply for wearing a mask. He was arrested, but the charges are unknown at this time. CopBlock.org’s own Ademo Freeman and Brian Sumner were there to record the scene.

Speaking of Brian Sumner, he joined me, Derrick J, DEO, and Severin for this episode to talk about his first week in MAC (the Mobile Accountability for Cops RV). He gave an “MTV Cribs”-style tour of the RV and shared some of the valuable tips he has learned working and filming cops with Ademo.

Brian is the founder of Fresno CopBlock, where this week police employees used a taser on a suicidal man and then shot him. Law enforcers in California have been charged with torturing children at a summer camp. The charges were originally felonies, but the district attorney saw fit to lower the charges to misdemeanors, not as part of any kind of plea deal but just to be nice. Conflict of interest?

One caller shared his thoughts on a new house bill in Pennsylvania that would require police departments to disclose the identity of law enforcers who discharge their weapons, rather than allowing police the discretion to hide their crimes from the public. Finally, the NYPD decides it will no longer discipline its own for “minor” infractions. If you’re caught selling loose cigarettes, though, they might kill you and get away with it. But if an employee of the NYPD commits a minor infraction, eh, it’s not even worth a slap on the wrist. What’s the point of being above the law otherwise?

Share your stories with us live on air every Wednesday night at http://CopBlock.org/Show from 7-9p (PST), and subscribe to our YouTube Channel and podcast feed on SoundCloud.