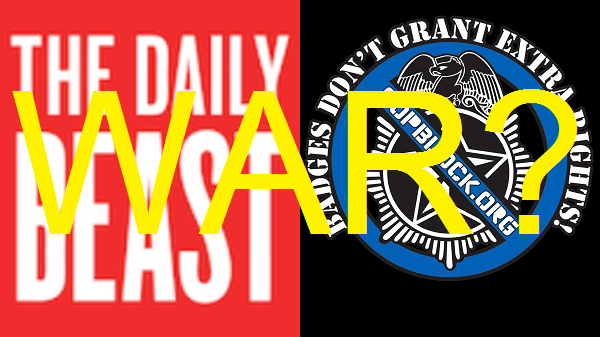 Recently CopBlock.org and its detractors were the subject of an article at the popular news outlet ‘The Daily Beast’ by writer James Joiner. [Read it here.] While it was an interesting read and we were grateful for the publicity, I feel I need to address some of the statements, portrayals and assumptions from that piece of journalism.

I did attempt to contact the author of that article and reached him on Twitter. I asked why we were not contacted for comments and he then claimed that he had attempted to do so. While it is possible, nobody I spoke with ever witnessed his outreach. I gave him my email address, but have not heard back from him. So here is my response.

[Note: If you are ever trying to contact CopBlock.org, use the contact information or submission form at this website. Our social media channels are too unwieldy to use for communication purposes.]

I want to investigate these two sentences from the article and their relationship.

It’s a tough time to be a law enforcement officer in the United States.

CopBlock does have a tendency to go overboard with its headlines, and stories posted to its social media pages and blog often don’t quite play out the way they’re summarized when investigated.

That first sentence is given no context and so I am not quite sure what is meant by ‘a tough time’. The number of LEO’s who were victims of a homicide is at a thirty year low, as are other acts of violence against them. In fact, violent crime in general has been decreasing since the 1990’s, even though the percentage of violent crimes solved continues to drop. So if being generally safer, having a lower workload and less expectations that they actually do their job is ‘a tough time’, then I would love to have their problems.

Instead police now spend more time collecting revenue by enforcing victimless crime laws. With all that extra income, as well as more and more federal grants and increasingly sophisticated technologies, it would seem that it is actually easier than ever to be a police officer. Which is why they are okay denying jobs to individuals with high IQ’s and making the career more inviting to those of average or sub-par intelligence. If it was getting tougher to be a cop, you think they’d be raising the bar, not lowering it.

However, I suppose, if new technologies are causing more people to become aware of cops immoral and criminal behavior, as well as educating people about the basic systematic problems with policing, that could be tough. It is always tough to be called out on your own ignorance, malfeasance, hypocrisy, criminality, immoral and generally negative behavior. So if this is what the author means by ‘a tough time’, then sure, but its the same kind of ‘tough time’ that even the worst criminals face when caught, so I don’t suppose it should evoke the suggested sympathy of the authors statement.

His second statement is essentially calling us out for not adhering strictly to objective facts, academic journalism standards and for using sensationalism in our media methods.

First of all, there are no objective facts. The entire point of methodologies like empiricism and journalism are meant to account for the fact that we can only experience the world subjectively. Therefore we cannot experience objectivity, so even if it does exist as an absolute, we would not have access to it. Most mainstream media claims to ‘be objective’ when in reality that is impossible. Striving for objective reporting by and for subjective beings is an honorable attempt to rise above our limitations, but its absolute fulfillment is a logical impossibility. Yet many mainstream journalism outlets have confused their attempt to be objective with actually being objective. This is another bit of flawed logic, but before I break into a diatribe about semiotics, I will move on.

Striving to be objective is, in many cases, a meaningful endeavor. However, it also depends on your goals. Objectivity is not the right tool for every job. Peoples ideologies and belief systems are not objective. And since we believe in reaching people where they think, we often delve into editorial or opinion remarks. Our goal is not to win a Pulitzer for being objective journalists, our goal is to fight the ever-growing police state before it swallows the very last of our freedoms and liberties to facilitate its growth. So while we often stray from objectivity, it does not necessarily make us wrong. Besides that, the available facts often change and the information we use is subject to change. This makes objectivity not only a media impossibility, but an ontological one, as well.

We are not, nor do we claim to be, ‘journalists’. Holding us to those standards is a mistake. Not only are we unconcerned with academic journalism’s methods, we find them distasteful. Because those problems with objectivity exist and are unrecognized by mainstream journalists, mainstream media presents itself as something it could never be. We prefer not to exist under the pretense of such lies and falsehoods. We are a collection of people with an agenda. We are propagandists. And so is every other media source, only they are too cowardly to admit or recognize their own agendas and how they influence their work.. Does CopBlock use sensationalism to draw in readers? We sure do. The police state is a massive problem. We aren’t trying to preach to a choir of people who already understand that problem. We are trying to break into new audiences so that our message finds new and varied targets. The internet is a massive place where information can easily be lost. To break through all of that noise, sometimes you have to shout. ‘Overboard headlines’ help us to accomplish that, as does wit, emotional appeals and shocking graphics. We could whisper a straight faced message to a handful of people in ways that might appease our critics, but the threat provided by the police state is so great that we do not think any peaceful methods should be left untried. You just never know what will appeal to people and bring more individuals to a greater understanding of the problem. And again, this is the same thing that all media outlets have always done. We just choose to relish in it rather than hide it shamefully out of sight and deny it.

Since the first sentence I shared from the article is an example of what we are accused of in the second, the irony is almost too much. The article begins with a faulty and sensationalist premise about it being tough times for cops, then tries to call us out for doing nearly the same thing. The very title of the article, claiming there to be a ‘war’ is textbook hyperbole. This is something that happens almost every time we are discussed by critics and other media sources. We are told that we pander, sensationalize and fail to meet standards we never claimed to be beholden to. And we are very outnumbered. Those who mindlessly support the police both inside and outside of the media are the vast majority. If you wonder why our methods seem so extreme you might consider that without them we could never break through the majority propaganda that we are enveloped in.

Since Daily Beast finds it appropriate to relay the idea that we are a terrorist organization, let me remind you that I have already addressed that accusation using the FBI definition of terrorism as a basis. In fact, according to those definitions, police themselves could be considered a terrorist group, while we simply do not fit the bill. In fact, many of the comments the author made in his article use arguments that we have already dispelled in the past. But if there is one thing we can usually say of our critics, it is that they almost never do their research.

Had James Joiner actually contacted us or read our work, perhaps he would not have put himself in the position of saying so many silly, illogical or outright false things. For instance, he mentions that police work to keep us safe so we can argue on the internet, when we have shown on numerous occasions that the supreme court has ruled that police have no duty to serve or protect us (keep us safe), but only to enforce the laws, which are deeply flawed and leave their taint on every individual who volunteers to enforce them.

So while we thank the Daily Beast for their somewhat favorable portrayal of us and the exposure, as well as illustrating the idiocy of our critics, we found their propaganda to be misinformed, chock full of factual errors and mostly ignorant of our work and ideas. I leave you with this final bit of wisdom- being in the majority does not make you in the right. In fact, throughout history, it has often been the case that the majority have been conditioned towards supporting those in the wrong and minority opinions are the starting point of almost all progress throughout history.

*I tended to use the term ‘we’ throughout much of this article. In doing so I am referring only to my own perception of my fellow CopBlock Network contributors, and not any objective truths about them or their own ideas, opinions, motivation, intent and beliefs. And this response is solely the work of and ideological content of myself alone.