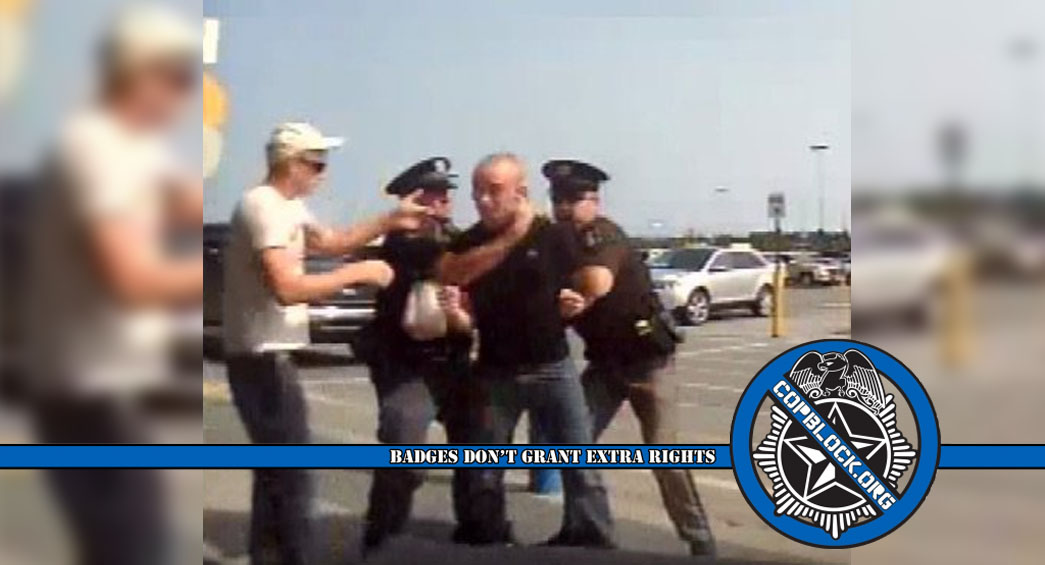 “No, now put your hands back on the fucking pole” is what Blayne Casler says came out of the mouth of Alpena (MI) County Sheriff’s deputy, Joe Smith, after being asked if he was being detained. Luckily for Casler the video seems to support his claim even without audio but we’ll let you decide.

Casler reached out to CopBlock.org via our submission tab (after friends of his said he should post his story here) regarding the incident capture by Wal Mart security cameras on August 2nd, 2014. For over a year Casler has been attempting to clear his name of the felonious charge of “attempted assault of a police officer” and a “resisting arrest” charge. He claims all he did was ask, “Am I being detained” and when Smith said “No” he took his hands off the pole, laughed and was assaulted within seconds.

Casler wrote in his submission:

Me (in the black) and my friend (in the white) go to Walmart for Drano. During this trip, a woman notices that my friend is carrying his firearm on his hip.
She gets scared of the weapon, even though it is legally in its holster at all times, and calls the police to report someone going into Walmart with a firearm. Dispatch asks the woman if he was brandishing the firearm. She ignorantly responds with yes but must not know what brandishing means.

So the police arrive on scene with the thought that someone is waving around a gun. I’m sure at this point they would be worried for the safety of the public because there is a firearm involved. Upon arrival, the police scope out the place and talk to people to try and find us, at this point me and my friend leave with Drano, he can be seen carrying the Drano out of the store in the video, as the police spot us.

The immediately tell us to turn around and put our hands up, mine they told to put on the pole. We both comply. Then I ask “are we under arrest/am I under arrest” the police officer responds with “No” (both officers are very stern and commanding). I drop my hands turn to my friend and laugh, still with both hands visible to the officers. As soon as I laugh, several seconds after putting my hands down, police Officer Smith grabs my wrist and twists it behind my back, wrenching my body to turn toward the store. He pushes up on my wrist in an effort to hurt my shoulder or arm and this pushes my body forward in the direction of the building.

Officer Hoyt then jumps on me and puts one arm around my neck and the other arm behind my body, this whips and turns my body in a circle. I ask again if I am under arrest with no response. I see that my face is unprotected and that they are going to force me to the ground. I attempt to avoid going face first into the ground although the force of both officers slams me into the pavement. Hoyt slams his knee into the back of my head, bouncing my skull off of the pavement. They begin to roll me, my hands are up and at this point I am just trying to protect myself from head trauma from the ground and Officer Hoyt.

They roll me on top of my hands with both of their body weight on top of me. Now I am trying to get the attention of others around me so someone would see what was happening. Officer Hoyt then forcefully covers my mouth with his hand and says “shut up, shut the F#$% up”. I am baffled at this moment that my right have been violated in so many ways as they cuff me. All the while this is happening, the guy with the gun who was supposedly waving it around, is standing there gun on hip, uncuffed, watching this happen. They did not secure the weapon they had been called on scene for, instead, they tackle and subdue a person walking with the suspect for laughing and asking questions? Seriously?

The guy with the gun gets cuffed and uncuffed in the matter of minutes, although I am jailed with bail for 72 hours on charges consisting of resisting arrest and attempted assault on a police officer. A felony charge. They also tried to charge me with reckless driving for how I pulled into my parking space, a charge that was later dropped for its ridiculousness.

Please help me. I do not deserve to be a felon, I am a law abiding citizen.

Ed Black is the Alpena County prosecutor assigned to the case that is currently offering Casler a ‘plea deal’ that doesn’t involve jail time. Yet, Casler – who’s the father of a 3 month old newborn baby – doesn’t want to take a plea deal because he never assaulted a police officer. The video shows that and even if the police say the assault happened in the struggle (or during the few seconds the trio is not on security footage) it’s clear that Deputy Joe Smith escalated the situation when he attempted to aggressively put Casler into an armbar. An action there seemed no logical reason for.

What we have here seems to be a case of “you didn’t obey my authority” mixed in with some officer butt hurt. It seems to me that Smith didn’t take kindly to Casler’s questions and lack of police worship. Even though Casler has never had a run in with the police in his life, he knew that if he wasn’t being detained than he’s ‘free to go’ and decided to question the officer while letting a laugh out about the incident. This enraged Smith who rushed Casler just seconds after.

Now Casler faces a felony for “attempted assault” on a police officer, yet, I don’t see any such actions by Casler in the security footage. Why? Because it didn’t happen. What’s more appalling is that he’s still going to court for these charges when the incident occurred over a year ago. Seems the punishment for hurting an officer’s feelz is to be assaulted, charged and dragged through a pointless courtroom proceedings where he could spend years behind bars – away from his newborn and family.

If you believe that Casler didn’t assault a police officer consider calling the Alpena (MI) County Sheriff’s department, commenting on their Facebook page or reaching out to Ed Black (DA) and asking them to drop these frivolous charges. After all, questioning authority, open carry or mouthing off to cops is not illegal. Yet, assaulting someone, caging them against their will and punishing them without due process most certainly is (according to those who claim to protect AND serve us).