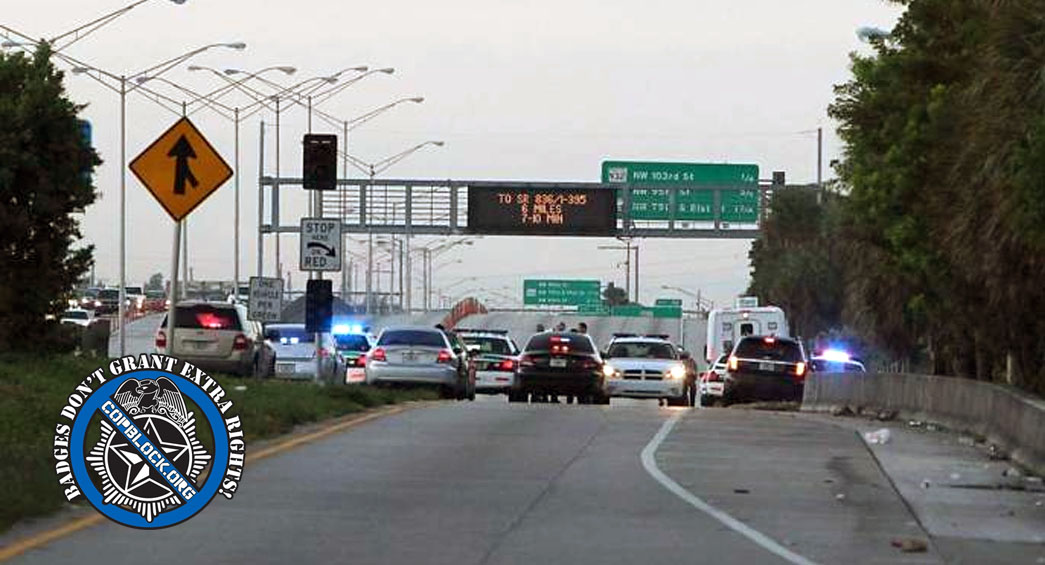 Junior Prosper a yellow cab driver drove into a light pole at the entrance to I-95 Monday morning. The cab was only slightly damaged, but then things took a turn for the worse.

For unknown reasons Junior Prosper fled the scene of the accident and ran up the southbound ramp at Northwest 119th Street. That’s when a Miami-Dade cop caught up with Prosper, which lead to a physical altercation between the two men in some nearby bushes on the side of the highway. This is when the Miami-Dade cop’s finger was bitten, his taser was discharged and he fired his weapon and shot Prosper to death.

In the audio between the dispatcher and the officer you can hear, “Shots fired. Shots fired.” Most of what the officer says is inaudible but it seems as if he’s saying, “Ah, he took a bite of my finger off!”

The officer who shot and killed Prosper, (who is not being identified by the police department at this time) was taken to the Ryder Trauma Center at Jackson Memorial Hospital. Meanwhile Prosper’s body lay on the side of the highway for several hours as detectives investigate the crime scene. This lead to a halt during Miami’s Monday morning commute as police shut down Interstate 95 from Northwest 125th to 103rd streets.

Miami-Dade Detective Daniel Ferrin said “A Taser was deployed, but we don’t know if the cop did it,”. This sounds to me like an attempt to shift the blame to the victim in order to convince others that the officers actions were legal or justified in using lethal force. Further enforcing the idea that it isn’t the police officers job to stop himself from killing someone, it’s the victims responsibility not to get killed by police officers. That argument, shapes the conversation when discussing police training, tactics and misconduct. It makes it so much more difficult to indict and convict officers of their illegal activities and leads people to have little or no faith in the systems they are brought up to believe benefit everyone. Who benefits most from these systems?

We’re told a lot of fairy tales growing up as children one of them is that law is moral, not our own conscience. That to follow all laws and orders no matter your conscience is to be moral, even when it’s not. And when police officers conduct themselves in immoral actions they are protected by this illusion. This illusion is based on the cultural conditioning that other members of society determine and know better what is moral and immoral, subjugating your worth in the process. You’re not only discouraged to act of your own freewill and conscious, you will be attacked by people who are immersed in the illusion, because you are a threat to their illusions.

We all know that killing someone is not a moral action unless it’s in self-defense, but now the term “self-defense” for officers is so murky it can be applied to just about any circumstance. And in this case, whose to say Prosper wasn’t acting in self-defense when he bit the Miami-Dade cops finger? And if you shot a person to death for biting your finger, would the legal system see your actions as moral, legal or justified? More lies and fairy tales you’re expected to believe, only making it difficult for people to differentiate illusion from reality. The simple truth is, to exercise and defend freedom is moral, the destruction of that is immoral.