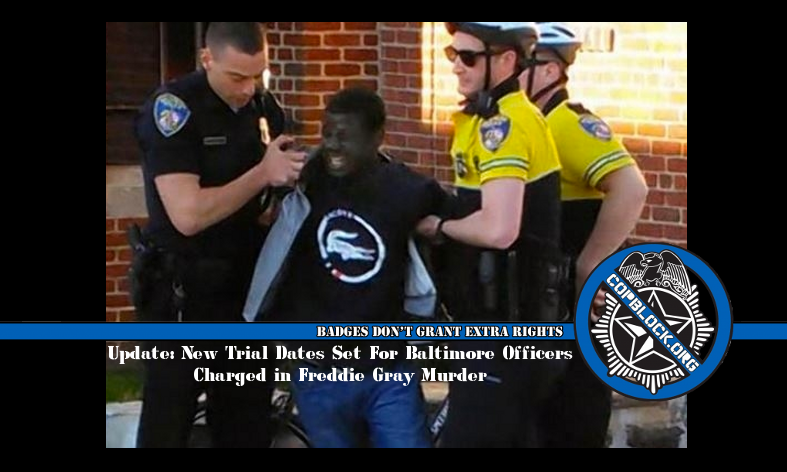 On September 29th, five of the six Baltimore police officers charged in relation to the murder of Freddie Gray appeared in court. During that appearance, Judge Barry Williams set court dates for the defendants. Officer William Porter, the only officer not present at the court appearance, will begin trial on November 30th of this year, while the other five are set to begin early next year. Porter faces charges of manslaughter, assault, reckless endangerment, and misconduct in office.

Sgt. Alicia White, who also faces charges of manslaughter, assault, reckless endangerment, and misconduct in office, is set to begin trial January 6th. Officer Caesar Goodson will begin trial January 25th on those same charges, as well as an additional “depraved-heart” murder charge. Ofc. Goodson was the van driver who transported Gray to the jail that day. Prosecutors have stated that they intend to call Porter as a witness against White and Goodson. In addition, Officers Garrett Miller and Edward Nero have been charged with misdemeanor assault, misconduct in office, and reckless endangerment charges. Lt. Brian Rice also faces those same charges and a manslaughter charge. Their trials will be held in February and March. There’s some speculation that Miller and Nero will be called to testify against Rice, due to prosecutors requesting that they be tried before him.

The fact that Porter was the only one not in attendance at the court appearance also led to some speculation that he may be looking for a plea deal in exchange for testimony against the others. Porter, White, and Goodman were involved in the transportation of Freddie Gray (when the injuries that led to his death presumably happened). Miller, Nero, and Rice were the officers involved in the initial chase and arrest of Gray.