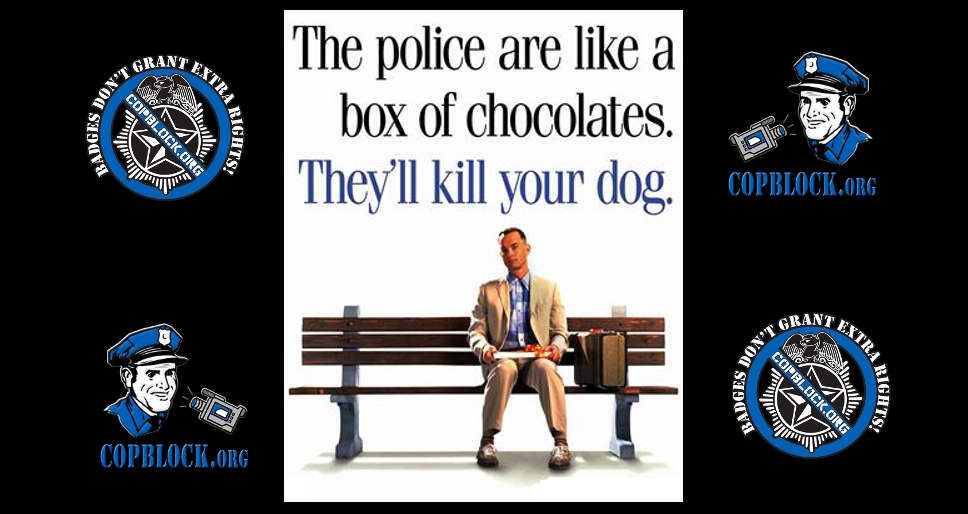 The following post was submitted by “Ryan C,” via the CopBlock.org Submissions page.

“Davie (FL) Police are the worst police in the country. They behave like 13 or 12 year old kids, but they fight and injure like grown men.”

My brother was just returning home from the store with my dog, in his car. When he opened the door to get out, my dog, Reese, jumped out of his hands, and then chased after a duck (It’s a given that the dog should have been on a leash and shouldn’t chase a duck. However, the cop was in the wrong, too.) At the same time, an undercover police officer came SPEEDING down the RESIDENTIAL street. He was going at least 35 or 40 mph in a 25 mph zone.

All Davie Police Oathbreakers do this. Any time I ever see a marked Davie Police cruiser it’s speeding with no lights, no sirens. A dark black car with some white. I’ve been almost struck coming around the corner dozens of time. I always yell ‘slow down!!’

He’s speeding and heading straight for my dog. My brother ran out, “STOP, STOP, STOP, MY DOG, MY DOG!!” If he had not put himself in the way, my dog would have been struck and killed. And the policeman would have never slowed down before or after. My brother was inches from the right headlight. And my dog was underneath the left one. She was so close, that just one of her claws got smashed. Just one little claw. The miracle was real. If it was one split second later, she would have lost her leg, or her life. He then gave my brother his badge number. He said it four or five times, but my brother was in so much shock that he didn’t hear it. When he heard it he hung up, and started to type it into a text message. Since he is dyslexic, he asked one more time. At that point the officer said, “screw this we’re calling Davie Animal Control, she should have been on a leash and I bet you don’t have papers. We’re gonna take your dog.”

At this point my brother started recording (which I haven’t uploaded yet) and said, “because you were speeding you almost killed my dog.” The officer responded “It’s just a dog. If a dog dies, a dog dies. You should have had it on the leash.” My brother then asked, “So you don’t care about dogs?” To which the officer responded, “No. It’s just a dog.” My brother pleads and asks if they could just part ways, but he said, “No, you started it. We’re taking the dog.”

About ten or so minutes later, ANOTHER UNMARKED police car with a plain clothes sergeant, who had no visible badge, inside arrived. This man is my hero. He talked to us. He understood his officers are the lowest scum on earth and said, “Hey, they probably were speeding. We’re not gonna take your dog, we can all just go our separate ways.”