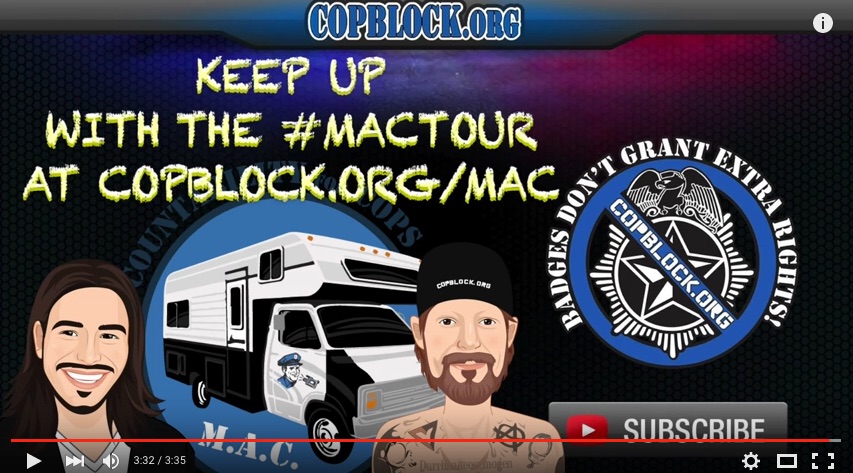 The MAC Tour doesn’t officially kick off until later today in Illinois when Brian and I meet up with Ryan Scott, CBN Contributor and police accountability activist, but last night we had our first run in with police. We made a pitstop in Noblesville, Indiana to visit with Adam – of Mystic Tattoo, Pete – Noblesville native and Miah – founder of Indiana CopBlock. While there we decided to chalk some police accountability messages outside the police department. Afterwards we said goodbye to our friends and headed over to the local Wal Mart where we commonly park overnight. While on our way back from a late dinner we noticed four police cars around MAC and started to record, see video below.

As you can see in the video the police were rather butt hurt over chalked messages on ‘their police station’ and attempted to call it vandalism. They also claimed that someone used spray paint to write some of their messages but this is absolutely false. Brian and I had recently pick up some ‘liquid chalk’ from Wal Mart and Noblesville was the first place we were able to test it out. See the recap video Brian and I recorded after our police encounter below. I’m fairly confident that the police were only taking our names because they wanted to know them and that they had no legal ground to do anything further. In fact, in the first video you can see the one of the officers on his cell phone. I’d be willing to bet he was either talking to the Chief or District Attorney about what charges (or actions) should be taken.

Regardless, Brian and I do have some things we can learn from this. Next time the police are around MAC we might not approach in the same manner. Observing from a distance – as if we were merely CopBlocking – might have been a better play here. It would have brought the police to us (if they choose to do so) and therefore we wouldn’t have been obligated to ID ourselves. When we talked to them, it was easy to make the connection that we were MAC’s occupants and therefore (in their minds) required to ID ourselves.

Also, we’ll never leave MAC without our high definition cameras again, even if just for a bite to eat – as was the case yesterday. We’re thankful that livestreaming was still possible (even though taking video from Bambuser is a PAIN) as it covered our lack of judgement momentarily.

Both Brian and I did well answering questions with questions – for the most part – and overall I’d say we handled the Noblesville police night shift pretty well. I’m sure this won’t be our last interaction with police coming to MAC’s door but next time we’ll be even more prepared.

To learn more about the MAC Tour visit the MAC Page and/or check out all our content here (or on YouTube). We look forward to seeing our friends in Chicago this weekend.