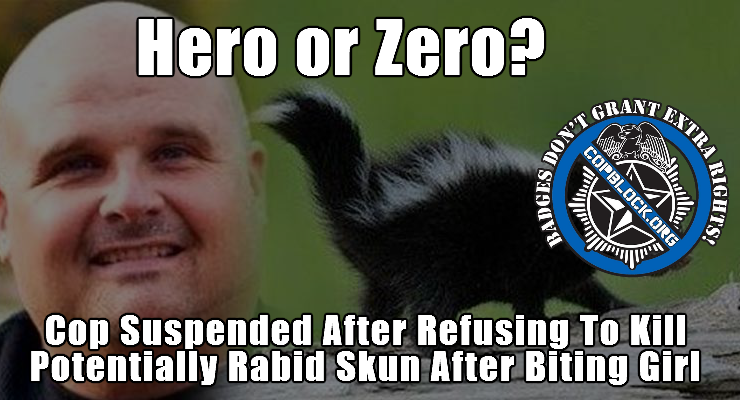 A Mount Carmel Police officer was suspended after refusing to kill a skunk. On July 27, Officer David Dean was called out to assist animal control officer Eddie Seabolt after a badly injured baby skunk had bitten a 6-year-old girl. The officer was asked to shoot the potentially rabid animal, so that tests could be done to see if the skunk had rabies. However, the officer refused.

Mount Carmel prohibits its animal control officers from shooting / euthanizing animals, which is why the task was given to Officer Dean. When Officer Dean refused to kill the animal, Fire Chief Ryan Christian shot the animal instead.

The department policy authorizes police officers, not the fire chief or animal control officer, to carry out the killing of animals when necessary. Patrolman Dean failed to carry out his duty, and he released his duty weapon to someone who is not his supervisor or partner, so I find him at fault on those two grounds.

Officer Dean was suspended for three days without pay and placed on probation for six months. In Officer Dean’s official reprimand letter, Chief Robinette stated that:

You failed to perform your duty as an officer for the Mount Carmel Police Department by refusing to put down an injured skunk that had bitten a small child, and you put the town in a liable situation by giving your duty weapon to an unauthorized person who discharged the weapon three times to accomplish the task,” Jackson stated in the letter. “All turned out well in this instance, however actions of this nature will not be tolerated in the future. If you have any sympathy for Officer Dean for his suspension, don’t. It’s not the first time he’s been in trouble before with numerous law enforcement agencies.

Update:  It was brought to my attention that the term ‘gypsy cop’ can be viewed as derogatory. This was never my intention to offend anyone by using the term. For more information on this subject, visit: https://en.wikipedia.org/wiki/Gypsy_cop

In the future, out of respect to the citizens that read my article, I will refrain from using this word. Instead, I’ll use ‘Toxic Cop’. Thanks to all who read my articles, as well as the other articles on CopBlock.org.