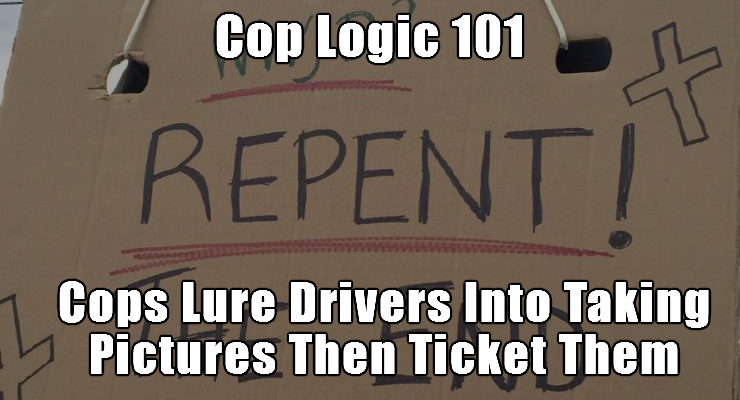 It’s estimated that there are over 327 million cell phones in the United States. It’s a fact of life that you cannot escape. Social media is designed for the rapid posting and sharing of pictures and videos – which is what police officers in New Hampshire are counting on.

Michelle Tetreault and her daughter were driving around Sommersworth a few weeks ago. While at a traffic light when they noticed a very weird and very obvious man standing near the car. The man was holding a sign reading, “Repent! The end is near!”  Michelle, at the urging of her daughter, snapped a picture of the man.  Moments later, she was receiving a ticket for $124.

New Hampshire law, as Michelle found out, prohibits a driver from using a phone without some type of ‘hands-free’ device (even while stopped at a traffic light or stuck in a traffic jam). So, Concord police now have a way to generate an almost unlimited stream of revenue. It’s quiet simple in fact. All they need to do is have one ‘crazy looking’ officer perched on the side of a road, acting crazy and waving around a large cardboard sign. Once the occupants give in to the temptation of social media, the police department then earns a quick $124.

But what is worse? A driver, who is stopped at a traffic light taking a picture, or some weird guy waving around a very large sign to passing motorists? If you ask me, the officers have the potential to cause more harm than the stopped motorists. But then again, police are not really big on logic. As long as they can twist or enforce any law that results in financial gain for themselves, they’ll do it at all costs.

During the 5-day sting, Sommersworth Police stopped 110 cars and issued 96 tickets. If each person was issued a ticket of $124, the city just earned a cool $12,000 – all paid for by the hardworking men and women of Sommersworth, New Hampshire. (And those figures wouldn’t include the other tickets received during the stop for victimless crimes, such as not wearing a seat belt)

Earlier this year, the same police department was reported to have setup another sting involving undercover police posing as homeless citizens. During that sting, police ticketed members of the public that gave money to the panhandlers.  When the anti-panhandler ordinance was passed this year, one of the councilmen stated that:

(it’s) an issue for those giving money, missing the green light, people upset, drive through the red light, accidents can happen. If an activity is putting the public at risk, then you will probably get a ticket.

The city council and the police believe that panhandlers are such a threat to public safety, that they are willing to ticket anyone giving food or money to the homeless. But at the same time, they willingly send their officers to panhandle with very large, very distracting signs, supposedly in the name of public safety.

Somersworth police Chief Dean Crombie said that what the officers are doing is not entrapment. According to Chief Crombie, “Entrapment is when you induce someone to do something they normally wouldn’t.” He reiterated the fact that his officers are out on the streets distracting drivers, I mean holding signs, because of his “obligation to make Somersworth a safer place to live”. So everyone can sleep safe tonight, knowing that Somersworth PD is out there protecting and serving. I know I’ll sleep a little more soundly tonight. Thanks Chief Crombie.