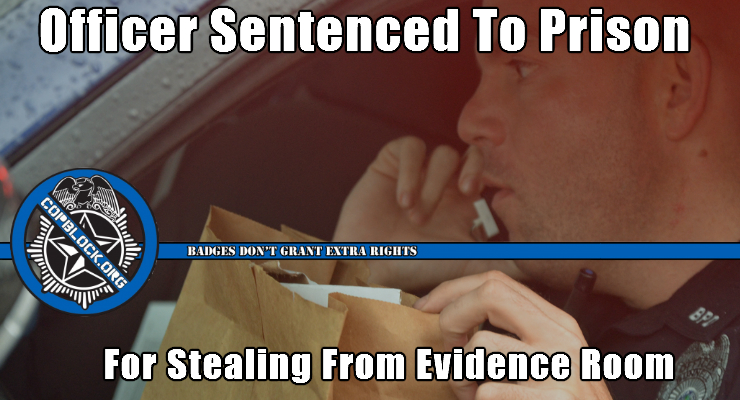 Officer Thomas Dann will know what it’s like being on the other side of the iron bars after being sentenced to 23 months in prison and 5 years of probation. Officer Dann pled guilty to ‘tampering with and stealing drugs’ from the evidence room at the State College Police Department. (State College is a city in Pennsylvania)

Officer Dann was accused of stealing 1.265 grams of cocaine, 88 tablets of OxyContin, 123 tablets of oxycodone, and 7 tablets of hydrocodone.  He was facing up to 60 felony charges – 23 counts each on two different drug charges and 14 counts of evidence tampering and theft. However, Officer Dann pleaded guilty to only 4 felony counts of ‘acquisition of a controlled substance by fraud’. Police suspect that the theft began around the spring or summer of last year, but didn’t learn of Officer Dann’s thievery until May of this year. Once the allegations surfaced, the investigation was turned over to the PA state police. According to police, they learned of the theft after Officer Dann was suspended on an ‘unrelated incident’.  A fellow officer noticed that he had a ‘desk drawer full of unsealed drug evidence envelopes’.

Instead of patrolling the streets of State College, PA, Officer Dann will mostly likely stroll the cells of the Special Housing Unit of Centre County Correctional Facility for up to 23 months. Afterwards, he will be on probation for a total of 5 years.

Officer Dann had been employed with the State College Police Department for almost 27 years prior to being fired in June of this year.

Though I do think it’s karma that the officer, who has most likely arrested people for drug possession, ended up being arrested for the exact same ‘crime’. Therefore, I would be remiss if I didn’t use this opportunity to point out this situation wouldn’t have happened, if there wasn’t a war on drugs. The ‘war on drugs’, which isn’t a winnable ‘war’, only serves to incarcerate citizens to pad the bottom-line for private corporations. Please take some time and read the article below. You’ll be shocked to see that several states guarantee private prisons a certain occupancy rate – some as high as 100% guaranteed occupancy. When those rates drop, it’s up to the states to arrest more citizens over the ‘war on drugs’ to meet those quotas. 26
SHARES
FacebookTwitterGoogleRedditTumblr
DiggLinkedinStumbleuponMailPrint
You Can Support Cop Block by shoppping on Amazon using the banner below:
BANNERS ARE CLICKABLE