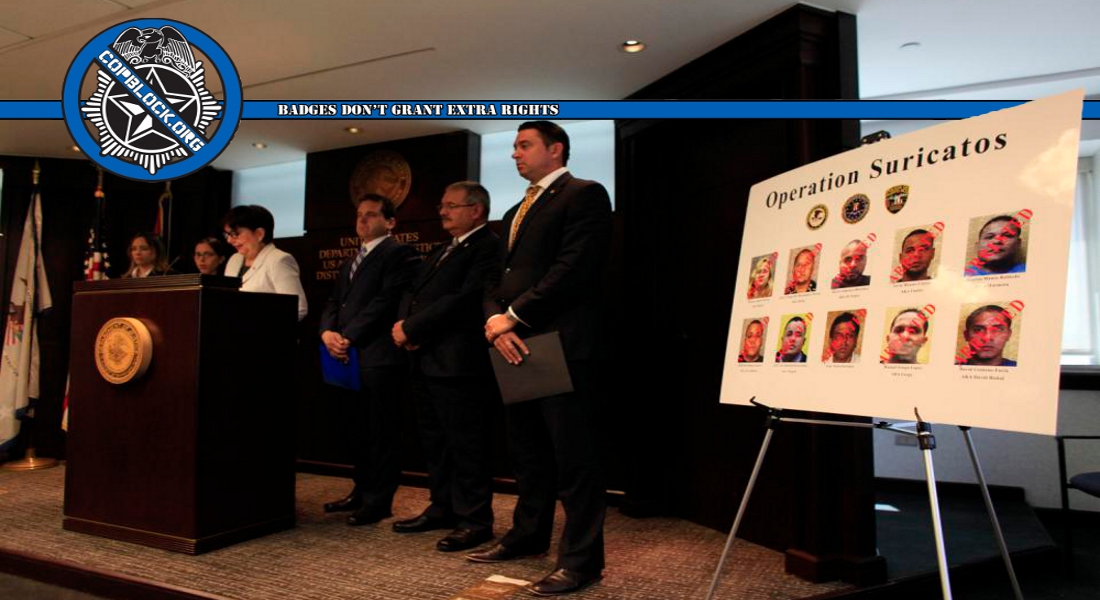 Earlier this week, the FBI announced the arrests of ten police officers in Puerto Rico and stated that they expected there to be additional arrests forthcoming. The arrestees, including a sergeant and a lieutenant, consisted of members of the U.S. territory’s anti-drug unit.

They are accused of stealing as much as $175,000 in cash during drugs, some of which were not legally carried out. They also took bribes from drug suspects they had arrested in exchange for releasing them. In one instance, they allowed a drug-trafficking fugitive to go free in exchange for two high powered rifles. They’ve also been accused of falsifying evidence to justify raids and federal prosecutors are investigating whether people may have been wrongly convicted of crimes, as a result.

In a fairly ironic statement considering the numerous similar abuses of the “War on (Some) Drugs” in general and seizure laws in particular, U.S. Attorney Rosa Emilia Rodriguez stated:

“These officers used their badges and abused their authority. What appeared to be a legitimate police operation was nothing else but an organized criminal act.”

The Puerto Rican police chief is currently in the process of restructuring the unit in light of the arrests and widespread corruption within it:

Police Chief Jose Caldero said he will restructure the department’s 16 anti-narcotics units and require those in them to undergo polygraph tests, a first for the island’s police agency. There are currently 320 officers in those divisions.

“We will clean house,” he vowed. “We will not tolerate corruption.”

The police in Puerto Rico have a long history of corruption, murder, and civil rights abuses. The Puerto Rican Police Department is currently being monitored as part of a federally mandated 10 year reform program. That was prompted by the arrest of 89 police officers across Puerto Rico by the FBI in 2010 (see embedded video below). In the past five years alone, over 100 officers have been arrested. The reforms have been criticized heavily as incomplete and too slow.