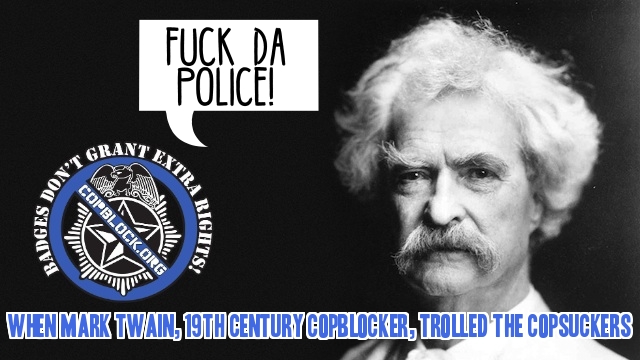 Samuel Langhorne Clemens, better known by his pen name ‘Mark Twain’, set the entire stage for the 20th Century. Often considered Americas first great writer, his stories, essays and ideas came to influence almost every aspect of American culture. His greatest skill seemed to be lambasting institutions and their practices, from religion to the state. Having suffered at the ineptness and brutality of police, Twain became critical of the profession. He became an outspoken critic of not only police, but their virulent supporters, especially other writers who dared to suck some cop.

In 1865 he found himself living in San Francisco where he wrote and published the story that launched his writing career, The Celebrated Jumping Frog of Calaveras County. During his time in San Francisco he had some less than pleasant observations of, and experiences with, the city’s police. He was further aggravated when Albert S. Evans, city editor of The Daily Alta California, writing under the name Fitz Smythe, began publishing bombastic and hyperbolistic praises of the police.

The two authors then became involved in the 1800’s version of a flamewar, trading insults. One night Twain and some friends decided to get an epic drunk on. Much to his consternation, he awoke the next morning in a jail cell, with copsucking foe Smythe staring at him through the bars.

Later that month Smythe had a number of letters published in the Nevada publication ‘Gold Hill News’. These letters included the suggestion that Twain’s troubles were partially precipitated by the company that he kept, calling them “Pacific Street Jayhawkers”, essentially calling Twain’s friends the local 19th century version of ‘thugs’. His admonishment continued as he suggested that when being taken to the station house, “do not lay down on the ground and compel them to drag you… Dragging your legs on the sidewalk always aggravates a policeman, and you are apt to get kicks for your pains… When you have been searched, and your tobacco and toothpick [knife] safely locked up, go quietly into your cell and lay down on your blankets, instead of standing at the grating cursing and indulging in obscene language until they lock you up.”

This was an old-timey version of apologism for police brutality.

Now it was Twain’s turn to answer, which he did in a letter published in ‘Territorial Enterprise’ in January 1866, entitled ‘Gorgeous New Romance’ by Fitz Smythe. In the letter he attacks the heavy handed glorification of police in a recent article by Smythe. A second condemnation of the copsuckery, based on actual events written about by Smythe wherein police actions are always proper, went as follows:

WHAT HAVE THE POLICE BEEN DOING?

“Ain’t they virtuous? Don’t they take good care of the city? …Isn’t it shown in the fact that although many offenders of importance go unpunished, they infallibly snaffle every Chinese chicken thief that attempts to drive his trade, and are duly glorified by name in the papers for it?  And ain’t they spry? …Ain’t they friskey? Don’t they parade up and down the sidewalk at the rate of a block an hour and make everybody nervous and dizzy with their frightful velocity? …Don’t they smile sweetly on the women? And when they are fatigued with their exertions, don’t they back up against a lamp post and go on smiling until they plum break down?”

In this paragraph we see Twain insult the police for…
a) Not bothering to deal with real crime/criminals and instead…
b) Use racial profiling to find easy victims, then…
c) Getting called heroes for it in the media.
He then goes on to call them slow, womanizing and lazy; in much colorful and playful language. It continues:

…Now when Ziele broke that poor wretch’s skull the other night for stealing six bits worth of flour sacks, and had him taken to the Station House by a policeman and jammed into one of the cells in a most humorous way, do you think there was anything wrong there?

…And why shouldn’t they shove that half senseless wounded man into a cell without getting a doctor to examine and see how badly he was hurt… Besides had not a gentleman just said he had stole some flour sacks? Ah, and if he stole flour sacks, did he not deliberately put himself outside the pale of humanity and Christian sympathy by that hellish act? I think so, The Department thinks so, Therefor, when the stranger died at seven in the morning, after four hours of refreshing slumber in that cell, with his skull actually split in twain from front to rear, like an apple, as was ascertained by post mortem examination, what the devil do you want to go and find fault with the police officers for? …Can’t you find somebody to pick on besides the police?”

Here we see Twain address police brutality and ensuing malfeasance that led to the death of their victim in a jail cell. We also see him satirize Smythe’s tendency to demonize the victim on the basis of his involvement with petty crimes. And since it seems that the, “Why don’t you get mad at criminals, not the brave cops that protect us from them?” was already in existence, as Twain mocks that position in his last sentences. And although Twain’s account of the actual incident is not entirely factual, he is responding to a style of pro-police narrative used by Smythe, more than the incident itself. It goes on…

I know the police department is a kind, humane and generous institution. Why, it was no longer ago than yesterday that I was reminded of that time Captain Lees broke his leg. Didn’t the free-handed, noble Department shine forth with a dazzling radiance then? Didn’t the Chief detail officers Shields, Ward and two others to watch over him and nurse him and look after all his wants with motherly solicitude – four of them, you know – four of the very biggest and ablest-bodied men on the force – when less generous people would have though two nurses sufficient – had these four acrobats in active hospital service that way in the most liberal manner, at a cost to the city of San Francisco of only the trifling sum of five hundred dollars a month – the same being the salaries of four officers of the regular police force at $125 a month each. But don’t you know there are people mean enough to say that Captain Lees ought to have paid his own nurse bills, and that if he had had to do it maybe he would have managed to worry along on less than five hundred dollars worth of nursing a month? And don’t you know that they say also that interest parties are always badgering the Supervisors with petitions for an increase of the police force, and showing such increase to be a terrible necessity, and yet they have always got to be hunting up and creating new civil offices and berths, and making details for nurse service in order to find something for them to do after they get them appointed? And don’t you know that they say that they wish to god the city would hire a detachment of nurses and keep them where they will be handy in case of accident, so that property will not be left unprotected while policemen are absent on duty in sick rooms. You can’t think how it aggravates me to hear such harsh remarks about our virtuous police force. Ah, well, the police will have their reward hereafter – no doubt.

Here Twain criticizes many of the same things we address today. First of all he accuses the police of using police and public resources for the benefit of police officers in an unethical manner, while at the same time tending to care more for the well being of police officers than the public, although at their expense.

He then suggests that police intentionally go out seeking new duties in order to justify and validate their existence and salaries while created growth for their departments, budgets and most of all- power and influence. This is a known problem of any kind of system, the intrinsic tendency for growth, which eventually causes the system to create new problems so that it can grow more to fix those same problems.

Twain’s criticisms of police, almost a century and a half later, still ring glaringly true. The current problems are, it seems, not current at all. They are inherent in the very sort of institutionalized policing that we still endure. This is why there is no hope that police can be held accountable. We cannot fix the police and return them to their pristine state, because that state never existed. The institution of enforcing laws with force by the state is eternally and infinitely flawed, and always has been. A look throughout history reveals that all throughout time, in any culture or nation, where there are government sanctioned law enforcement institutions there is also ineptness, corruption and abuse. Brutality, malfeasance and the intrinsic structural and cultural issues of public policing seems to operate as a universal constant.

In a hundred and fifty years will people read CopBlock articles and marvel that nothing has changed, or will they marvel at how primitive and savage we were to allow such a flawed and brutal institution to exist in our time?