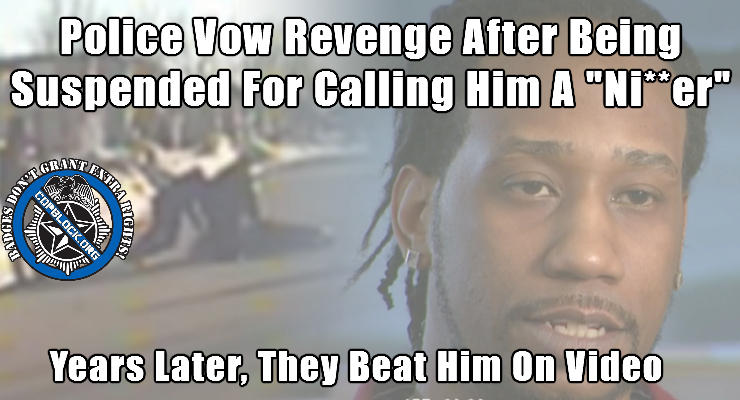 Most people are fortunate enough to never have a run-in with police. However, George Taylor of Montgomery, IL, has had several encounters with the same brutal and racist police officers. What makes his case a little different, his run-ins were all caught on tape.

In February 2014, Taylor approached police as they were questioning his girlfriend’s son outside of her house. Once he made eye contact with police, he was violently grabbed by the neck and slammed to the ground. In total, three officers, Deputy Police Chief Armando Sanders, Officer Christopher Johnson, and Sgt. Ismael Diaz, participated in the illegal and unwarranted violence against Taylor.

As a result of this encounter, Taylor was charged with obstructing identification and resisting arrest. However, once the judge in the case reviewed the dash cam video, he issued a ruling of not-guilty for Taylor.

During the trial, police lied under oath, stating they asked for Taylor’s name and identification several times, but that he refused.  The judge pointed out that only seconds transpired between the moment police asked Taylor for his name and when he was violently brought to the ground. In fact, the judge stated that Taylor was neither combative nor non-compliant in his ruling.

Montgomery Police Chief Daniel Meyers refused to comment on the pending litigation, but did state that:

As a department we embrace a community oriented policing philosophy. The relationship with our department and the community we serve is an excellent one, and the Montgomery Police Department is committed to strengthening the bonds of respect and support with the citizens that we have sworn to serve and protect.

So why would police be so violent towards Taylor? Well, as seen in the dash cam video, one of the officers present was the same officer that was caught on tape calling Taylor and his family the n-word.

On October 26, 2009, Taylor, his girlfriend, and their children were pulled over by the same police officers seen in the video above. Officers accused the girlfriend, Sherida Hughes, of speeding. She denied speeding, claiming the officers had been following her for a while, so she made it a point not to speed.

For over 90 minutes, police terrorized and threatened Taylor and the other occupants. At one point, they were so scared for their safety, Taylor’s girlfriend actually called 911 for help. Unfortunately, the 911 was was routed back to the Montgomery Police Department, where the 911 audio record was ‘accidentally lost’.

Officers tried at several points to force the occupants out of the car, even though there was no probable cause to do so. When that didn’t work, one of the officers tried to devise a scheme that would allow them to ‘legally’ break into their car:

What if someone’s life is in danger in there (inside the car)?

You know, the kid (in the center seat) did look like he was kind of squished between those two … he was fighting for air, trying to get out.  We could go in there, trying to save his life or something.

Then, at 5:57 in the video below, the officer says “Bunch of fu**ing ni**ers”.  The officer that said the racial slurs was suspended for 3 days. The police department reached a financial settlement with Hughes over that incident.

One key point in this video, is when one of the officers states: “Don’t worry…you’ll make up for it next time” – and that officer was right. Just a few years later, those same officers was caught on video, beating Mr. George Taylor in front of his girlfriend’s house.