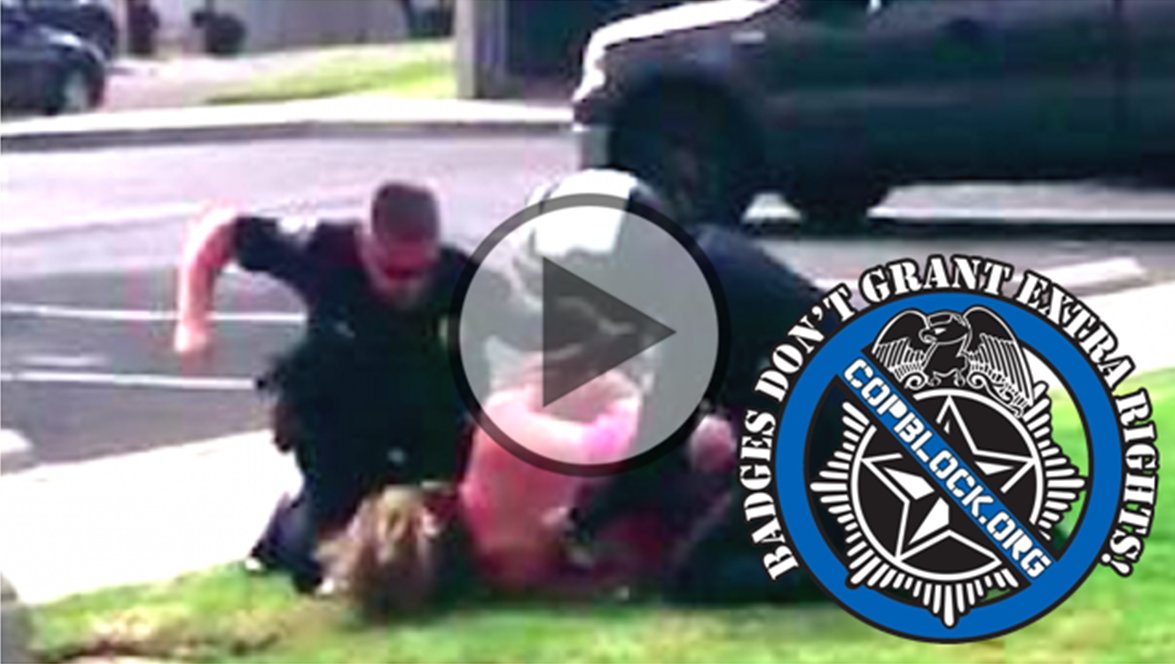 Video has surfaced showing a California woman being brutally arrested during a traffic stop after an alleged seat-belt violation by Carlsbad police.

As part of a lawsuit against the city, 40-year-old Cindy Hahn says she and her two children, ages 7 and 11, were leaving a birthday party on July 31, 2013 when they spotted an unoccupied vehicle on the road with its alarm going off surrounded by police cars.

Hahn – whose father is a cop – says she asked officer Kenyatte Valentine why police weren’t turning off the cars alarm. The officer reportedly responded by telling the woman to mind her “own fucking business.”

Outraged at the officers behavior, Hahn says she told a man nearby what the cop had said and together they decided to start recording the scene – a move Valentine expressed his discontent for as he continued to curse at her.

In response, Hahn says she called a non-emergency police line to voice a complaint and then left. As she drove away however, Hahn says Valentine pulled her over claiming that she wasn’t wearing a seat-belt – before he and another officer pulled her from the vehicle and pinned her to the ground.

That’s when cellphone footage recorded from the scene shows Valentine repeatedly punch Hahn in the face in front of her young children as she and bystanders scream in terror.

Hahn says her children bellowed as they watched the brutal assault from the car, and that her son still talks about it.

“The only thing that he’ll talk to me about is, ‘I couldn’t protect you, Mom. I could’ve. I could’ve got him off you. I could have helped you,’ ” Hahn said.

The woman received two felony charges as a result of the incident: resisting arrest and battery on a peace officer. Those charges were dropped in July by the San Diego District Attorney’s Office however, after prosecutors saw the video.

The video was released as part of a lawsuit Hahn filed on Friday against the officers involved in the beating and the city of Carlsbad. The suit says Hahn “was transported to the emergency room where she was diagnosed with head and brain contusions and subsequently diagnosed with a concussion” as a result of the incident.

Hahn says she still “suffers permanent memory loss and brain trauma as well as other physical and emotional injuries.”

Carlsbad police said in a statement that the city “looks forward to bringing th[e] lawsuit before the proper judicial authorities as soon as possible,” and added that officers “are prepared to provide a complete and detailed account of the facts of th[e] incident in a courtroom, not in the media.”