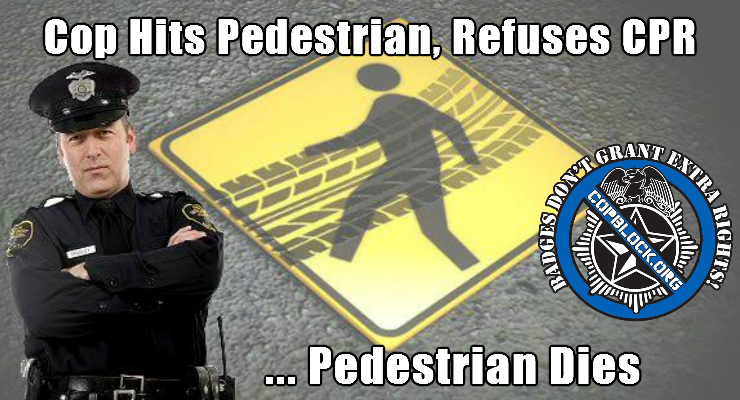 Over the weekend, an East Cleveland police officer struck a man with his police cruiser. After the officer stopped, he refused to perform CPR on the critically injured man. (Police have NO duty to serve and protect)

According to police, the officer was responding to an emergency call at around 10 p.m. on Saturday when he struck a 21-year-old pedestrian crossing the street.

The Ohio State Highway Patrol claimed the officer had his emergency lights on prior to the accident, however, a witness that WEWS spoke to, said otherwise.

“The officer, when the officer got out of the car, the officer went around the man, the young man on the ground, and checked his windshield out,” the witness told Volk. “Then he put his hands on his hips. And everybody was like, ‘What the f*ck are you doing? The guy you hit is on the ground. He’s dying. He’s dying.’”

A second officer arrived on scene minutes later and performed CPR, but it was too late to help the dying man.

Update: Police have identified the pedestrian killed by the officer. He is 22-year-old Christopher Deshon Kimble Jr. Initially, police had mistakenly identified the deceased as 21-year-old Michael Dejean Powell.  Once the officer’s name and dash cam footage is released, it will be posted here. 3.3k
SHARES
FacebookTwitterGoogleRedditTumblr
DiggLinkedinStumbleuponMailPrint
You Can Support Cop Block by shoppping on Amazon using the banner below:
BANNERS ARE CLICKABLE