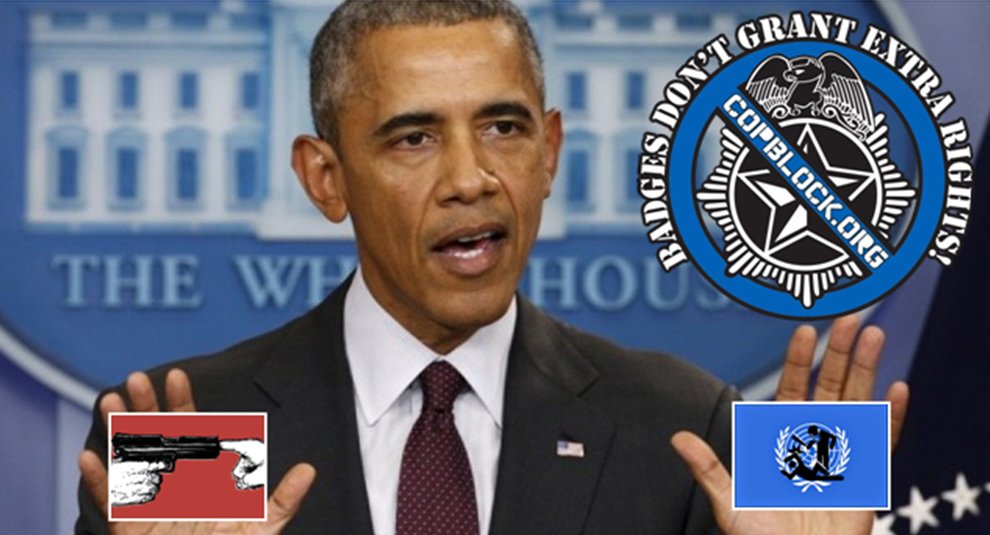 As politicians seek to capitalize on the most recent gun free zone massacre at Umpqua Community College in Douglas County, Oregon, resounding calls to restrict Americans’ access to firearms have resumed – and a plan by the Obama administration and the United Nations to deploy a “global police force” to fight “extremism” has been unveiled.

“The president has frequently pushed his team to consider a range of executive actions that could more effectively keep guns out of the hands of criminals and others who shouldn’t have access to them,” Earnest said. “That’s something that is ongoing here.”

Following last weeks shooting, the main stream media attempted to portray 26-year-old assailant Christopher Mercer as a racist, right-wing gun-fanatic who supported “white supremacist causes” and “rambled about his hatred toward black men” – despite his obvious targeting of Christian victims.

CNN was even accused of altering a selfie that Mercer, who was mixed raced, uploaded to social media in order to make him appear more white. The news outlet dismissed the claims however, and maintain they did not change the photo themselves but copied it off twitter.

A look at Mercer’s social media history – which has now been scrubbed – reveals the man sympathized with Virginia shooter Vester Flanagan, raged against both blacks and whites, and expressed support towards radical Islam and the Black Lives Matter movement.

I point these things out not as some sort of attempt to create racial animus like the media – I seek only to illustrate that a false narrative is being presented to the American people in order to further the political aim of demonizing gun owners.

President Obama has said that he will continue to politicize the issue of gun violence, but the unilateral action he might take on firearms is unclear.

“I don’t have a lot of details to provide you in terms of the work that’s being done by the President’s team to do this scrub of the available authorities that the president may have to address gun violence,” Press Secretary Earnest said. “But that is ongoing work and if there are any conclusions that are arrived at that the President agrees with then we will announce it publicly.”

Supporters of such actions claim to only want “reasonable restrictions” on firearms, but following such proposals to their logical conclusion means accepting the reality that with time and pressure, gun-rights in the United States will completely disintegrate.

“We don’t want to take your guns,” such supporters say. “We just want the government to license them, register them, regulate how they are made and sold, how many bullets they can hold, how scary they can look, and whether or not you can even buy one in the first place. Oh, and if you fail to comply with any of these measures, we will have other men with guns(police) come throw you in jail, take your guns, and make it to where you can never legally buy them again.”

Has history taught us nothing? Only an ideological driven sophist or willing dupe can fail to see the totalitarian tiptoe we have steadily been taking in this country, and the importance of gun-rights as a safe guard against it.

According to the latest FBI crime statistics, knives killed five times more people last year than assault rifles, the overall number of murders involving guns has dropped from 8,855 in 2012 to 8,454 in 2013 to 8,124 in 2014, and mass shooting numbers are flat over the last several decades.

Meanwhile, police killed more Americans in 2014 than all U.S. mass shootings combined, the government has been stockpiling weapons and ammunition while telling us all to be civil and give up our rights, and President Obama is sanctioning bombings that are murdering more innocent civilians in the Middle East.

“Gun control” doesn’t mean no guns – it means the eventual centralization of gun ownership in the hands of the psychotic state and its enforcers – and who the hell wants that? Certainly not anyone that understands the implications. The United States government has made it clear over and over again – they perceive American enemies to be gun owners and libertarians.

One of the most egregious confirmations of this was back in 2012 when a report published by The National Consortium for the Study of Terrorism and Responses to Terrorism (START) stated that Americans “reverent of individual liberty” and others adamant about protecting their personal freedoms, are “extreme right-wing terrorists.”

In that paper, Hot Spots of Terrorism and Other Crimes in the United States, 1970-2008, researchers used definitions from another START study, 2011’s Profiles of Perpetrators of Terrorism, to characterize what traits should be considered when describing right-wing terrorists.

The report found that the so-called “Sovereign Citizen Movement” has been named the number one domestic terrorist threat in America, with “52 percent of respondents agree[ing] and 34 percent strongly agree[ing] that sovereign citizens constitute the most serious terrorist threat” – opposed to 39 percent of respondents who agreed and 28 percent who strongly agreed that Islamic extremists are the most serious threat.

Self-described sovereign citizens take the position that they are answerable only to common law and are not subject to any statutes or proceedings at the federal, state, or municipal levels. They especially reject most forms of taxation as illegitimate. Participants in the movement argue this concept is in opposition to “federal citizens” who, they say, have unknowingly forfeited their rights by accepting some aspect of federal law.

Many members of the sovereign citizen movement believe that the U.S. Government is illegitimate and that the office of County Sheriff is the most powerful law enforcement officer in the country having powers that trump that of federal agents, elected officials, and local law-enforcement. As such, a County Sheriff could conceivably arrest the President of the United States if in their jurisdiction.

“The 2013-14 study results show that law enforcement’s top concern is sovereign citizens,” the START report states. “Although Islamic extremists remain a major concern for law enforcement, they are no longer their top concern.”

The report recommends state and federal law enforcement share intelligence data on targeted groups, develop “tactical responses” to threats and “act on that information to prevent or mitigate threats.” Among the threat groups listed include Militia members, tax-protesters, and Christian Idenitarians.

Federal authorities, particularly the Department of Homeland Security, during both the Obama and Bush administrations, have been involved in producing a plethora of literature portraying liberty lovers and limited-government advocates as terrorists.

One of the most blatant examples was the infamous 2009 MIAC report, published by the Missouri Information Analysis Center which framed Ron Paul supporters, libertarians, people who display bumper stickers, people who own gold, or even people who fly a U.S. flag, as potential terrorists.

The rush to denounce legitimate political beliefs as Orwellian thought crimes shared by terrorists has accelerated in recent years, but now, mundane everyday behaviors are now regarded as suspicious by the United States government.

Under the FBI’s Communities Against Terrorism program, the bulk purchase of food, using cash to pay for a cup of coffee, and showing an interest in web privacy when using the Internet in a public place are all labeled as a potential indication of terrorist activity. Obama Administration Attorney General Loretta Lynch announced last week at the United Nations that her office would be working in several American cities to integrate what has been dubbed the “Strong Cities Network” (SCN) in a move toward international consolidation of law-enforcement agencies around the globe.

Called the “Launch of Strong Cities Network to Strengthen Community Resilience Against Violent Extremism,” the international program already includes 23 cities around the world including New York, Atlanta, Denver, and Minneapolis in the United States.

Decried by critics as amounting to “nothing less than the overriding of American laws, up to and including the United States Constitution, in favor of United Nations laws” that would inevitably be implemented in the country without any Congressional oversight, the Obama Department of Justice described the program in press release last week stating:

Cities are vital partners in international efforts to build social cohesion and resilience to violent extremism. Local communities and authorities are the most credible and persuasive voices to challenge violent extremism in all of its forms and manifestations in their local contexts. While many cities and local authorities are developing innovative responses to address this challenge, no systematic efforts are in place to share experiences, pool resources and build a community of cities to inspire local action on a global scale.

The SCN will connect cities, city-level practitioners and the communities they represent through a series of workshops, trainings and sustained city partnerships. Network participants will also contribute to and benefit from an online repository of municipal-level good practices and web-based training modules and will be eligible for grants supporting innovative, local initiatives and strategies that will contribute to building social cohesion and resilience to violent extremism.

The SCN will include an International Steering Committee of approximately 25 cities and other sub-national entities from different regions that will provide the SCN with its strategic direction. The SCN will also convene an International Advisory Board, which includes representatives from relevant city-focused networks, to help ensure SCN builds upon their work.

New York Mayor Bill de Blasio has already lauded the program and its intent to protect citizens against “all forms of violent extremism, whether it’s based in religious, or racial, or nationalistic or ideological intolerance.”

The agenda to consolidate federal authority over local law enforcement was typified best in a white paper presented to the House Permanent Select Committee on Intelligence in 2012 – which outlined an ‘evolving mission’ for Homeland Security that moves away from fighting terrorism and towards growing a vast domestic intelligence network that would expand integration with local and state agencies and private-public partnerships already underway via regional fusion centers.

DHS maintains that “the threat grows more localized” which requires the militarization of local police in major cities and the training of staff from local agencies to make sure that oversight is restricted to the federal government.

The creation and implementation of fusion centers in urban areas was to “serve as focal points within the state and local environment for the receipt, analysis, gathering, and sharing of threat-related information between the federal government and state, local, tribal, territorial (SLTT) and private sector partners.”

“As the threat grows more localized,” the report reads, “the federal government’s need to train, and even staff, local agencies, such as major city police departments, will grow.”

Apparently the need for international involvement in local policing is growing too. According to Attorney General Lynch, the Strong Cities Network scheme “will be run by the Institute for Strategic Dialogue (ISD)” – a left-wing European think-tank.

Knowing that according to the United States governments own reports and documents, liberty-lovers are considered “terrorists,” it is important to note that the UN and ISD have similar views and routinely support gun control and other draconian social policies across Europe.

According to a ISD report entitled Old Threat, New Approach: Tackling the Far Right Across Europe, “The project will develop an online tool to provide practical training for practitioners, and will seed a long-term network of experts and practitioners working to counter far-right extremism” – which the group identifies with firearm and ammunition ownership.

President Obama told the UN last week that the U.S. will use “all of our tools” to fight Islamic State terrorists but its clear from the ISD website what kind of “extremism” it plans on fighting.

Gracing the site are numerous mentions of “far-right extremism across Europe,” the increasing legitimization of “anti-immigration and anti-Islamic discourses,” “the extreme right,” “Islamophobia and anti-immigration sentiment,” and “violent right-wing extremism.”

In other words, what most Americans consider to be traditional Western values will now be policed as thought-crimes and “terrorism” by international bodies in cities across the country with absolutely no oversight by United States citizens – who some sources say – are 55 times more likely to be killed by a police officer than a terrorist.