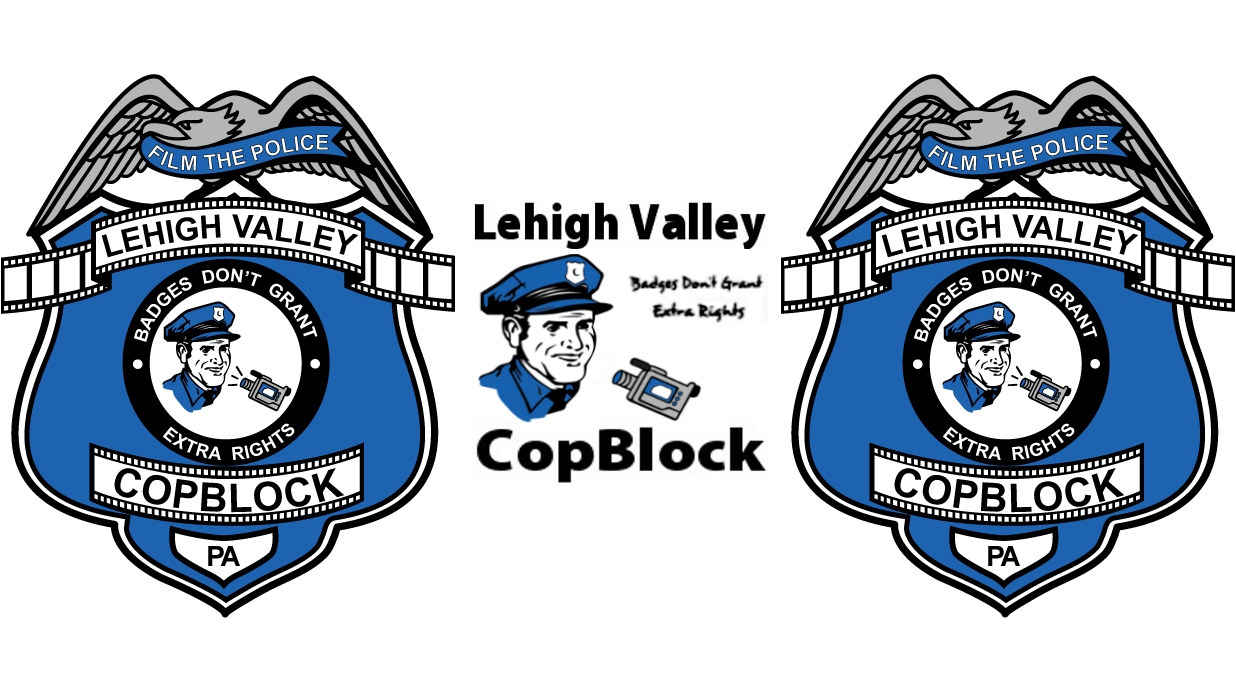 It was a quiet afternoon of filming police for fellow Lehigh Valley Copblocker, Rick Gonzalez, and I. We had met up with Scott Marshall from the Oath Accountability Project with the intention of doing a First Amendment audit on several police stations throughout Lehighton, PA. The audit was simple: see if we would be harassed while we filmed & photographed on the public property outside the stations. Ideally, nothing would happen. The police would ignore us & we’d leave.

And that’s just what happened at the first two locations. However, at the third station, the one belonging to the State Police, things were quiet at first. There was an area with clear signage stating “Authorized Persons Only Beyond This Point” on the far side of the parking lot which we avoided like the plague. After an hour had passed and no one bothered us, we were packing up to head home – satisfied that our right to film was respected. All of a sudden, four PA State Troopers came flying out of the front door of the station. They ran right up to us demanding to know, “were you just over there?” while pointing to the restricted area. Knowing we hadn’t been in that area and had done nothing wrong, I informed them, “I’m not answering your questions.” Instantly, I was handcuffed & told we were being detained for the crime of trespassing. The officer in charge, Corporal Waltman, pointed at Rick (who was filming from the other side of the lot) and demanded “him too!”

All of our camera equipment & cell phones were confiscated as “evidence of the crime.” We were all taken into a processing room, which had no cameras. I kept stating “I do not consent to searches and I formally request that a camera be present. I do not feel safe here.” My requests were met with laughter as the officers ransacked all our pockets for our identification. Scott and Rick both protested to the officers searching them as well. The two officers looked at each other and one told the other, “best thing to do with these guys is to ignore everything they say.”

The officers stated a number of times that we couldn’t just come to a police station to take pictures & film them. We needed to contact the PR department for permission first, otherwise, we were trespassing. They said they consider any person on their property a threat. They also kept spouting propaganda bullshit that cops are targeted & killed daily, bombs are put into cars, and that people put M-80s into their cell phones to blow up officers with while pretending to film. Because of this, no one near their station can be trusted and all cell phones & cameras need to be taken for review.

The police then spent the next hour trying to show us how “human” they are, meanwhile they have the right to detain and lock us up because they’re “scared” of us. They talked about their heroic deeds of saving a drowning child, narrowly missed being hit by a car, and kept insisting they have to be careful because people want to hurt them. Maybe if their job didn’t include violating other people’s rights, harassment, murder, & just plain shitty human behavior, they wouldn’t have anything to worry about. These conversations showed me one thing about the cops, they’re brainwashed from the top-level to believe that they’re heroes & victims.

About three hours later, we were all released without our camera equipment & cell phones nor any tickets with the officer’s name on it (they’re going to mail the charges to us). I wasn’t leaving without knowing who they were. I turned and demanded each and every one of their business cards. I was denied. I, then, asked if I could just write down their names. I was told to do it on my own time. I also asked for a receipt for my property being held. Again, I was denied. I began to argue over it, and was threatened with arrest if I didn’t leave. Finally, Rick & Scott convinced me to leave the station…for now.

Help me get my camera back!