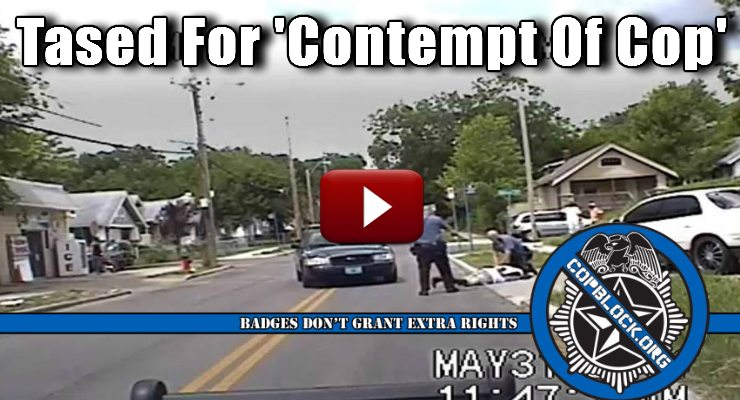 Damian Words had filed a civil lawsuit against Officer Dale Secor and the Kansas City Police Department for unnecessarily tasering him over a parking dispute. The lawsuit alleges that Officer Secor didn’t follow proper police training by seeking to escalate a non-violent situation, then tasering Words for arguing. In addition, the officer lied about the incident on the police report.

On March 31, 2014, Officer Dale Secor noticed a car that was parked ‘illegally’ in a driveway.  Officer Secor, not being able to see inside because of tinted windows, opened up the car door to see who/what was inside. The owner of that car, Damian Words, began walking towards his car, asking why the officer was inside it, stating that he wasn’t allowed to enter his property (presumably without a warrant). Words was working across the street and parked his car there due to lack of available parking.

Officer Secor used the ‘I was in fear’ routine, trying to justify using his stun gun, which struck Words in the left upper chest and left forearm. On the police report that Officer Secor filed, he claimed that Words became ‘upset and aggressive’ and that he ‘bladed his body and got into a power stance”. Of course, the dash cam video proved the officer lied, but Words was ticketed for illegal parking and arrested for resisting arrest, and failure to comply with an officer.

Now, Words has filed a civil lawsuit against the city and Officer Secor, claiming that the officer used ‘unnecessary’ force when he tased Words. Additionally, he is alleging that the officer chose to escalate the situation instead of following department policy, which states an officer should attempt to deescalate a situation like this.

“Secor was antagonistic, defensive and refused to listen to anything Words tried to tell him in mitigation and explanation of his responsibilities at the store,” according to the lawsuit. “He could not turn his back on a store with a door unlocked and customers wandering in and out of it, even when Words attempted a gentler approach.”

Words alleges he suffered physically and emotionally and still has nightmares about the incident. He is seeking unspecified damages.

A local Kansas City TV station, KSHB, asked former FBI agent Michael Tabman if he saw Words ‘assuming a fighting stance’ on the video. Tabman said no.  UMKC Law Professor Rafe Foreman, who is a taser expert, said that “This is an excessive use of force, this officer is not properly trained.”

Below is a partial transcript of the video:

The officer asks Words for his ID: