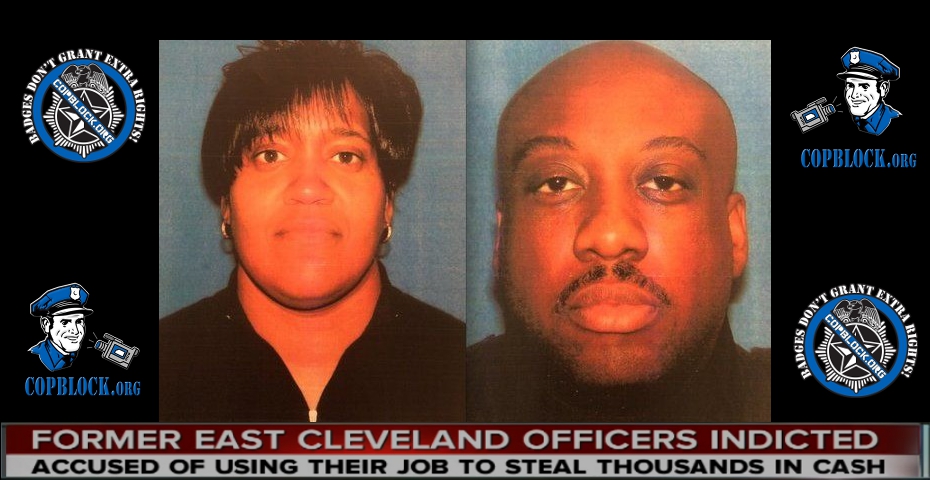 East Cleveland, OH – Officer Torris Moore, Officer Antonio Malone, and Officer Eric Jones of the East Cleveland Police Department, have been charged with making up evidence to use against suspected drug dealers in order to obtain search warrants (see below for indictment). When the searches reveal cash, they pocket some and turn the rest in to evidence. In one case for example, they only handed over 74,000 dollars, but the search actually recovered 100,000 dollars.

“This cost cases. It allowed people who were violating the law, to escape the full extent of the prosecution they should have been subjected to, in order that these officers could enrich themselves” YEAH! Only WE are allowed to do that through civil asset forfeiture, is what he was really saying! I told you the state hates the competition. But to me the real question is, “How many more criminals are in the East Cleveland Police department?” Why just Saturday an East Cleveland police officer killed a pedestrian speeding through the neighborhood on a call that he did not have his lights on for. Witnesses say the officer was more worried about his car than the person who was dying at his feet, refusing to give aid. Plus now the dashcam footage is lost. How convenient is that? So how deep does the rabbit hole go in East Cleveland? How many more criminal cops are there in East Cleveland, And what is going to happen to these criminals?

Officer Jones has already retired, in the hopes of escaping prosecution no doubt, and the other two have been suspended without pay. But what will really happen to them? Keep an eye on CopBlock.org to find out!