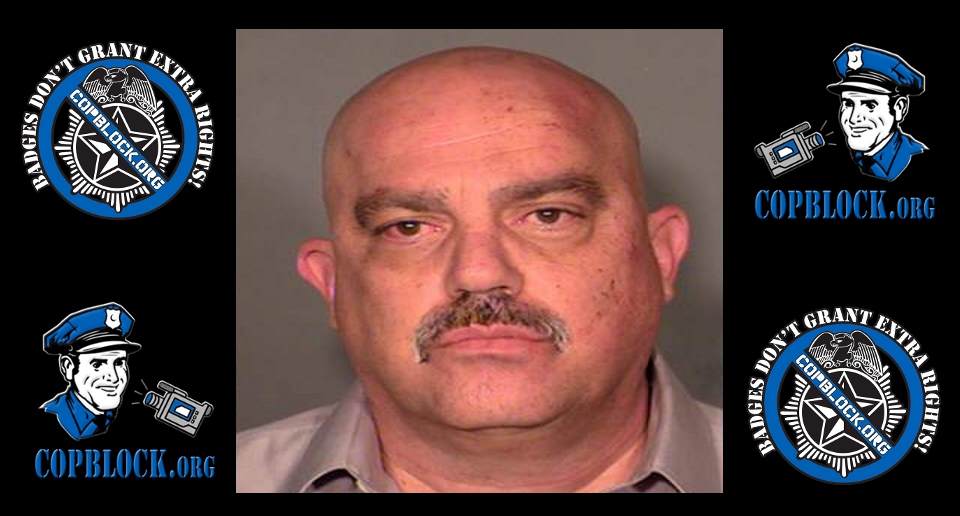 Sgt. Anthony Russo, of the Clark County School District Police Department in Las Vegas, was arrested Sept. 5th after a drunken one man crime spree that included running a red light, smashing into another car at 60 mph, assaulting the passenger in that car, punching a bystander who attempted to pull him away, and then pulling his gun on others that had tried to assist his victims. Sgt. Russo was off-duty and not in uniform at the time. He never identified himself as a police officer, not that that would have made his drunken rampage any more legal or less outrageous.

Troopers said Russo was at fault in the crash that escalated into fight where the off-duty school police sergeant drew his gun. He faces charges that include driving under the influence, failure to obey a traffic signal, possession of a firearm while under the influence of alcohol, drawing a deadly weapon in a threatening manner and two counts of battery, NHP said.

Witnesses said Russo ran a red light at the off-ramp while going about 60 mph before hitting the car, according to arrest records obtained by the Review-Journal. Bystanders went to check on the Hyundai’s passengers, and Russo, wearing “dress clothes,” punched the car’s passenger in the face three times.

When bystanders pulled Russo away from the passenger, he punched one of them in the face and lifted up his shirt, where his firearm was holstered. He pulled out his gun, and a female bystander stood between Russo and others at the scene, according to the arrest record.

That’s when Russo went back to his car.

The arrest record said he failed to take a field sobriety test. He was taken to University Medical Center — as were three other people involved in the crash. Troopers got a warrant to draw four vials of blood from Russo, the arrest record said. He was then booked into the Clark County Detention Center.

Sgt. Russo has been suspended for his actions that night. Additionally, since he is facing felony charges, Russo is actually on an unpaid suspension, rather than the typical paid vacation that cops generally receive while their crimes are being “investigated” by their co-workers.

This isn’t the first time Sgt. Russo has made the news with his gun. In 1998, he shot at a 13 year old kid with down syndrome four times, hitting him twice. Peter Liriano, who was shot in the arm and leg, but survived, had been spotted by police walking down the street with a BB gun, which isn’t actually illegal. Not surprisingly, Russo was cleared of any wrongdoing by LVMPD “investigators” and the District Attorney’s Office, both of whom have literally never seen a shooting by police that they didn’t consider justified.

Incidentally, Russo is the president of the school district’s Police Officer’s Association, the police union for school cops.