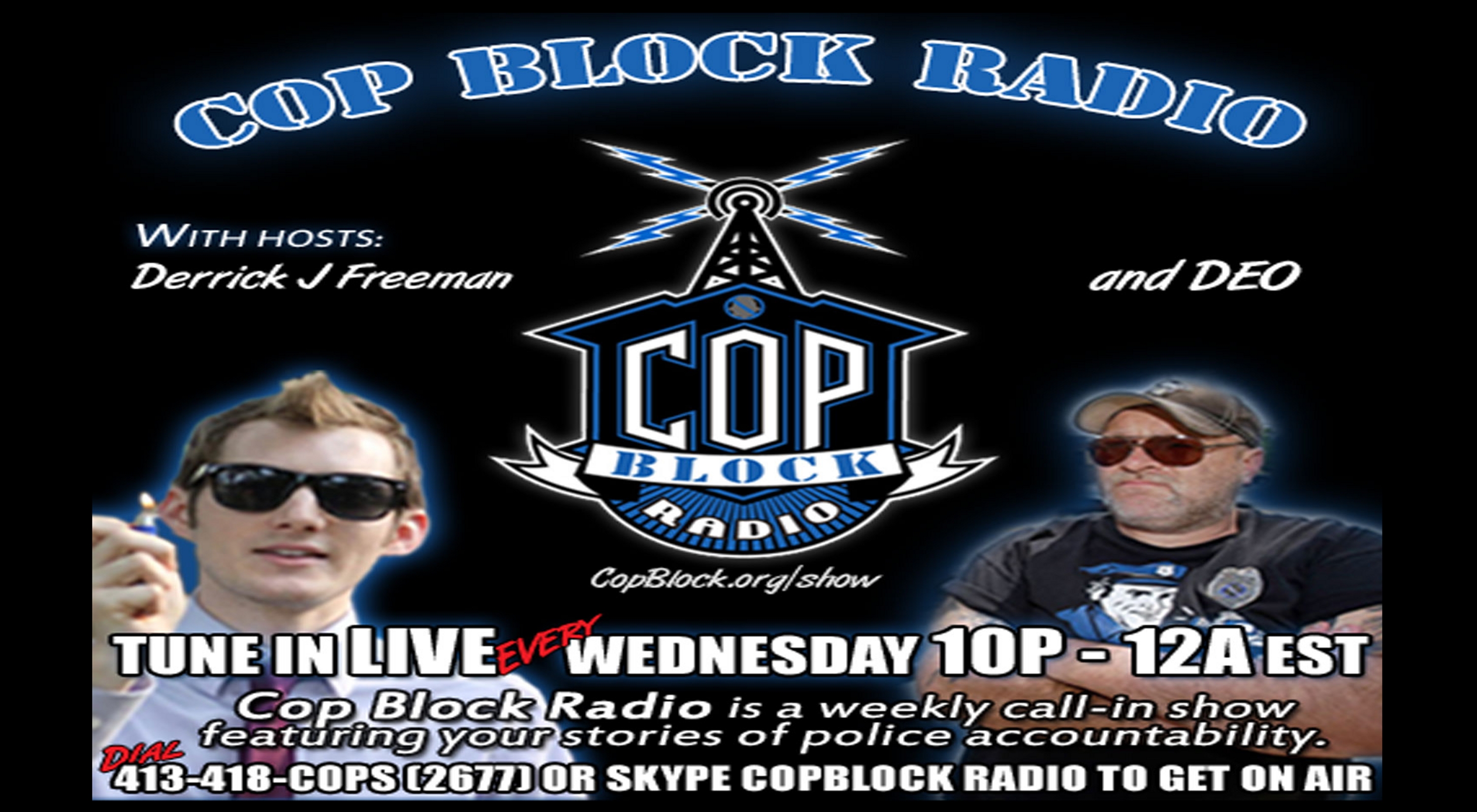 Last night CopBlock Radio started off with some good news! Passengers on a Boston bus decided to take out the cell phones and record video of a law enforcer using excessive force on a woman being arrested for petty theft. Because they decided not only to record, but to intervene peacefully, they were able to calm the crazed law enforcer down and de-escalate the situation. You know–what the cop is supposed to do! He pulled out his gun on the unarmed woman, but the passengers weren’t having it. They repeatedly shouted, “PUT DOWN THE GUN!” until the law enforcer complied. Victory! You too can make a difference. Recording evil is not enough. Good men must also DO something. Speaking up against injustice in the moment is a peaceful way to stop evil while maintaining the moral high ground. Had any of these passengers used force, it would have escalated the situation and likely would have resulted in some injuries, if not deaths.

Unfortunately, there aren’t always bystanders around to de-escalate the violence that police are sure to bring. For example, law enforcers in Oklahoma broke a suspect’s window with a gun, beat him with the butt of a rifle, and tasered him while he was handcuffed. One of them was even fired in 2011 for violating the use-of-force policy, but he was reinstated and awarded $366,000 in compensation. With perverse incentives like that, is it any wonder why he would do it again?

This week cross-dressing lawyers calling themselves “the Supreme Court of Virginia” decided that consent doesn’t matter when it comes to law enforcers entering your home. In fact according to them, refusing to let the police into your house gives them authority to enter. Consent be damned! Could you imagine if rape cases were decided this way? “Your Honor, she turned me down for sex, which is all I needed to hear before having sex with her against her will.” This logic would not stand in court for you, but for members of the badged class, up is down and black is white and no means yes!

It shouldn’t surprise anyone, then, that an employee at a Dunkin Donuts refused service to a member of the badged class. The law enforcer was angry and would not accept the franchise’s apology, instead demanding a financial “contribution” to a law enforcement fund. What happened to a business’ right to refuse service to anyone? And in case you missed the irony here: the cops seem to think that when they violate your rights and use excessive force, your tax dollars should pay for compensating their victims, and when you hurt their feelings by refusing to sell them a donut, you should pay for that too. See how that works?

Good thing law enforcers in New Hampshire are spending their time posing as homeless people in order to collect revenue for the state. Begging? No. They’re tricking drivers into taking their pictures at red lights and then issuing tickets for breaking the “no cell phone” law. Don’t they tell us that their job is about safety? Turns out that is a lie.

Andre Stockett joined us to share his encounter with police, and CopBlock contributor and editor Kelly Patterson called in to share the story of a Las Vegas cop who murdered Kelly’s friend on video and was promptly arrested. Just kidding. The only consequence for this badged individual murdering an innocent person was a $30,000 per year bonus! This week we were also joined by CopBlock contributor Ryan Scott, who will join us again next week to talk about alternatives to police.

CopBlock Radio airs every Wednesday night from 7-9p Pacific time at http://CopBlock.org/Show. Hosts Derrick J, DEO, and Severin take your calls and bring you the best and worst of the week in police accountability. You can support the show by purchasing cool gear at the CopBlock Store or by sending Derrick J a donation in bitcoin.