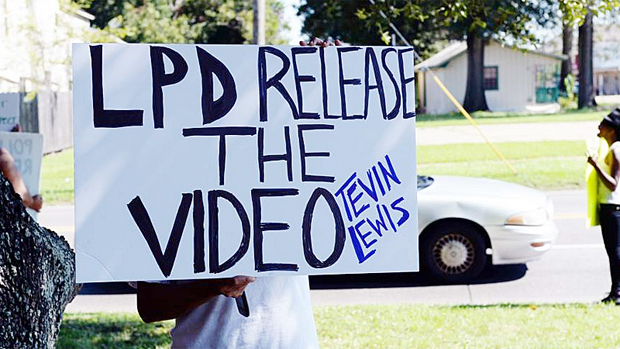 In the early evening hours of September 12, Tevin Lewis and Robert Stewart were standing outside of a home on Sonny Street with several other men in the Best Subdivision in North Lafayette.

Witnesses to the incident say police rolled up on the two and jumped out of their patrol units with guns drawn. Lewis began running and police, who were serving an arrest warrant on Stewart, gave chase.

Lewis is said to have run through several back yards and jumped at least one fence before police opened fire on the fleeing man and shot him in the back. They said he had a gun tied to his hand and that they feared for their lives.

Witnesses say it was cold-blooded murder and at least one video, which would confirm this, has been confiscated by police and has yet to be released despite protests.

Stewart, who was being served the warrant, was immediately taken into custody along with four other men who were not charged with a crime but were witnesses to the incident.

Three days after the shooting, Lafayette community leaders along with the local chapter of the NAACP held a press conference where several eye witnesses came forward to give their accounts of the incident, according to the Acadiana Advocate.

All of the witnesses present said they had yet to be interviewed by police.

Ronald Boute, a 15-year resident of the neighborhood and an eyewitness to the shooting, says Lewis did run from police and continued to run after the first of two shots were fired. Boute says he saw Lewis fall to the ground and into a ditch after Boute heard the second shot fired. He also says he didn’t see a gun in Lewis’s hand but says it did appear he was running for his life.

Tommy Morovant, another resident in the neighborhood, says he saw police arrive on the scene and jump out of their car with guns drawn. He says he saw Lewis run from police but that he did not see a gun in his hand.

Then there’s Sheila Carter, who has lived in the neighborhood known as “Quiet Town” for more than 25 years.

On the night of the shooting, she returned home with her two small grandchildren after visiting her mother at the hospital all day. She says police met her when she arrived home and would not let her enter her house with the exhausted children for at least a half hour.

When police did finally allow her into her home, they followed her to the door and insisted she allow them inside to view her surveillance system’s DVR. Carter says police threatened to seize her home and arrest her if she did not allow them into the house to view the video.

She reluctantly agreed after police told her they were investigating the attempted murder of a police officer. According to Carter, a police officer began to play the video of the shooting while she watched.

She says she saw Lewis running away as a police officer took aim and shot at him from behind. The police officer immediately stopped the video after the first shot was fired and told her they were confiscating her surveillance system.

Carter says the officer became very aggressive with her in an attempt to seize her property. Police did eventually serve her a warrant, classifying the investigation as an attempted murder of a police officer.

According to The Advertiser:

Sheila Carter was driving up to her home on Soullier as police worked the scene. After about 30 minutes, she was let into her house. An officer stopped her at the door, she said, and told her to hand over the tapes from her surveillance system. She said she and the officer watched the footage of Lewis being shot.

“I saw a young man running for his life,” she said. “I saw a police officer face him and pull his gun.”

Carter said the LPD officer stopped the tape after the first shot, and then became hostile towards her, saying that if she did not hand over the tapes, she could be arrested and have her house taken.

A warrant was ascertained to confiscate her video, stating that this was an attempted 1st degree murder of a police officer, Carter said. She gave up the footage, which leaders called to be released immediately. They’re also calling for an investigation into the intimidation allegedly employed to get the tapes from Carter.

“I can’t sleep because of this,” she said tearfully. “It’s playing over and over again in my mind.”

The Lafayette Police Department has a different story of the incident. In a press release, the department says that Lewis along with several other men ran from police as they tried to serve an arrest warrant on Stewart. Stewart was facing an “operating a motor vehicle while intoxicated” charge. Police initially referred to Lewis as “Kevin” but subsequent reports refer to him as “Tevin.”

As officers arrived in the area, one of six males standing outside of the residence began to run. Officers gave chase and followed Lewis behind several houses. When the suspect ran towards the 200 block of Soulier Street the officer in pursuit observed a pistol. The suspect was given multiple commands by the officer to drop the weapon. When the suspect did not drop the weapon, the officer fired at least two shots, striking the suspect. The suspect, Kevin Lewis (22) of Lafayette, was apprehended and handcuffed. The gun was found to be tied to Lewis’s arm and had to be cut free by officers in order to be secured. Lewis was transported to an area hospital and is in stable condition. Criminal Charges are pending on Lewis.

Officers at the residence of 113 Sonny Street arrested Robert Stewart on a City Court warrant for OWI. Stewart was also found to be in possession of a handgun and charged with illegal concealment of a firearm and possession of a stolen firearm.

The remaining four suspects were detained and transported to the Lafayette Police Department for questioning. The shooting is being investigated by the Lafayette Police Department’s Officer Involved Shooting Team. The investigation remains ongoing with the potential for more arrest related to the incident.
And as far as the video goes, police are trying to assure the public that their intentions are sincere.

According to The Advocate:

Police Department spokesman Cpl. Paul Mouton said technicians are working to extract the video from the private surveillance device while taking care not to damage the equipment or its images. The FBI will then “enhance” the video for clarity, and all evidence will be presented to the 15th Judicial District Attorney’s Office for review, Mouton said.

The footage may be the only video evidence in the case.

Although the department has money in its upcoming budget to purchase body cameras, officers are still months away from receiving the equipment. Dashboard cameras are installed in each officer’s vehicle, but police cars on the scene that night were parked on Sonny Street; the shooting happened around the corner on Soulier Street.

Lafayette NAACP President Marja Broussard, who was in the meeting with police on Friday, expressed concern about the crucial video’s preservation.

“Something could happen to that video. I’m sincerely worried it’s the only copy,” Broussard said.

Police have said the video system has been sent to the FBI for analysis and there will not be an update for at least a month. They are also not releasing any dash or body camera footage as they continue the “investigation.”

Here is a complete list of community leader demands:

Lewis, who spent several days in the hospital while police refused to allow his family to visit, has since been released and incarcerated on warrants for resisting an officer, possession of a firearm as a felon and illegal carrying of weapons, charges all stemming from events that night. He has previous convictions for marijuana and simple burglary.

Watch a video of the press conference below.