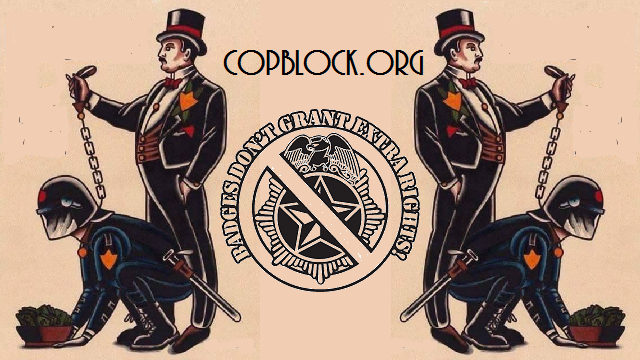 Are you getting tired of police critics and people who wish to abolish your profession? Does the fact that the public is becoming increasingly skeptical of your institution bother you greatly? If so, I have a suggestion for you.

Do your fucking jobs.

The really dangerous criminals in our society aren’t drug dealers or petty thieves. The greatest threats to humanity are currently seated as the head of corporations or in their boardrooms. The criminals that affect us all are government officials and employees whose corruption and abuse affects everybody living under these systems. The men and women whose actions provide the greatest threat to our happiness, health and freedom are at the top of the social order.

Yet you insist, like any low grade scavenger, on feeding from the bottom. You have made your living dredging your livelihood from the dregs of humanity. Yet as your institution grows it has found itself sometimes dipping into the middle class to satiate your ever-growing need to play childish games of authority. And as a result, more and more people are giving you the ol’ stink eye and becoming critical of how you operate.

This will not just go away. If history shows us anything, it is that empires like the one you have helped to build and protect will eventually crumble under the expanse and expense of their own tyranny. Ours is rapidly heading that way, thanks to your assistance to the ruling elite who steer such machinations.

Yet there is a way you can slow this march towards oblivion. There is a way that you can regain the trust of the citizenry. And it is ever so simple. Just arrest the politicians and white collar criminals whose misdeeds affect the greatest number of human beings. There are any number of corrupt politicians, environmental despoilers or thieving bankers who threaten the lives of us all. Not to mention the criminal cops among your own ranks. These should be your targets.

These law-breakers are not only the most vile and dangerous, but the most despised. Were just one or two of you LEO’s to investigate and follow up with arrests for these kind of crimes, you would quickly become national heroes. As you did this, others would follow in your footsteps. And before long, nobody would listen to a word that people like me or other CopBlock Network Contributors have to say.

You could effectively silence the entire growing police criticism movement in this way. Even though your institution would still be flawed, would still be illogical and immoral, nobody would give a fuck. When the underdogs see you bark down the big dogs, they would cease to care about our yapping any longer, no matter how valid and truthful it was.

Yet we all know why this will not happen. Despite the phony pretense that your institution exists for the good of the average person, we all know that police really just exist for the benefit of the ruling classes. Just try doing what I suggest and see how quickly the real beneficiaries of our legal system put the smack down on you. If you actually were working for the good of the common person against the will of the elite, your bosses would retaliate so quickly your heads would likely spin all the way off. Or at least be twisted off by even higher paid mercenaries.

If you don’t believe me, try it. See if your real rulers will allow you to enforce the laws and create public well-being at their expense. Even though this would return you to hero status and silence people like me, you will not do it because it cannot be done. And it cannot be done because the entire idea that your existence is for the benefit of regular people is a lie. You are the slaves that whip the other slaves on behalf of the masters. You turn your whips on them and you will be put in the same position as the rest of us.

While drunk on power you have fooled yourselves that the masters propaganda detailing your heroism is true. But from down here where most of us stand, you look less like heroes, and more like monsters. And this is why more of us are coming to despise you and everything that you stand for. If there is any hope at all for you to turn this back to your favor, it is that you attempt to turn the whips back on the masters. If not to actually subdue them, then to illustrate the gravity of the actual situation, in opposition to the lies that coat the surface of our society.