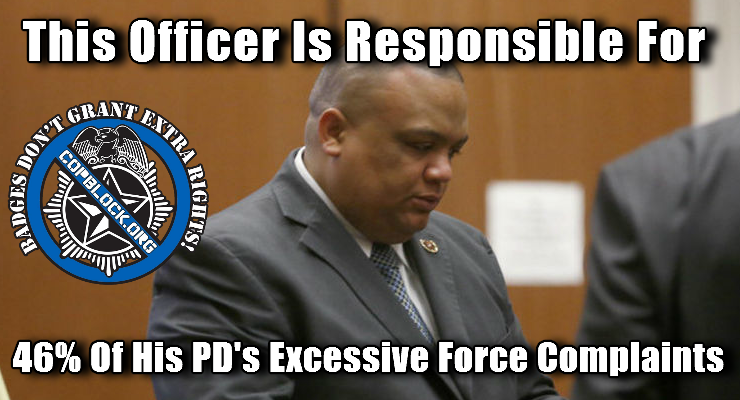 In 2012, Officers Orlando Trinidad and Sean Courter ‘pursued’ Marcus Jeter on the Garden State Parkway.  During this encounter, Officers claimed that Jeter was trying to gain control of the officer’s weapon.

Jeter was arrested with eluding police, resisting arrest, and assaulting a police officer – all felonies. However, once Jeter’s attorney gained a copy of the dash cam video, it was clear that officers made up everything relating to Jeter and what happened that night. The prosecution, who had not viewed the dash cam video prior to charging Jeter, dropped all charges on the spot after seeing what really occurred.

In reality, the police officers were the aggressors, violating the law and Jeter’s civil rights. After being stopped, the video shows that Jeter raised his hands up in the air – and he never reached for a weapon.

The next thing I know, one of them busts the car door and there is glass all over my face. As soon as they opened the door, one officer reached in and punched me in my face. As he’s trying to take off my seat belt, I’m thinking, ‘Something is going to go wrong’ –  And when they open the [police cruiser] door, about to put me in, the officer hits me in the back of the head again

Jeter says the cops continued hitting him, telling him not to resist arrest. That claim is backed up by the officer’s video.

Both of the officers were indicted on a wide array of charges, including: conspiracy, official misconduct, falsifying or tampering

The third officer on scene, Albert Sutterlin, took an ‘early retirement’ from the department in 2013 after pleading guilty to tampering with official records.

If convicted, Officer Courter faces 28 years in prison and officer Trinidad faces 33 years in prison. It is expected that after the criminal trial is over, Jeter will file a civil lawsuit against the officers.

Officer Trinidad is also a defendant in another civil lawsuit filed by Rodolfo Crespo. The lawsuit claims that Crespo asked Trinidad for assistance in making a phone call, when Trinidad “without justification or provocation” grabbed Crespo “by the throat and threw him to the floor.” Officer Trinidad then proceeded to punch Crespo repeatedly while pinning him to the floor. Crespo’s injuries include a “large laceration to his right ear, which had to be sewn back on.”

The mayor of Bloomfield, Michael Venezia, is the only reason the officers are being charged at all. Internal Affairs had reviewed the incident and declined to charge, or even discipline, the officers.  It was Mayor Venezia who stepped in and asked the local prosecutor to review the case for possible charges.

One last thing I would like to mention is that he Bloomfield Police Department staffs 125 employees. In the last decade, the entire department has been involved in 137 incidents of police using excessive force. And of those 137 incidents, one employee has been responsible for 47: Orlando Trinidad.

The full dash cam video is below. It contains the video from two different police cruisers.

2.9k
SHARES
FacebookTwitterGoogleRedditTumblr
DiggLinkedinStumbleuponMailPrint
You Can Support Cop Block by shoppping on Amazon using the banner below:
BANNERS ARE CLICKABLE