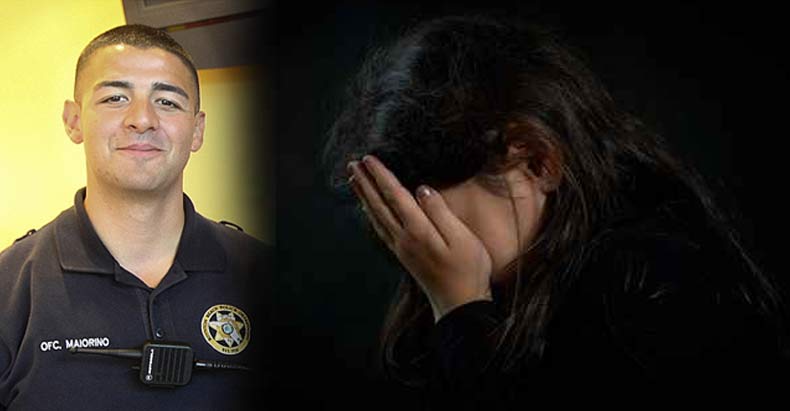 In March, I blogged about Stephen J. Maiorino, who had been accused of raping a woman after her friend had been arrested for DUI by another officer. In that post I wrote:

On October 15, employees with the Boynton Police Department stopped a vehicle and arrested the driver for DUI. This left the 20 year old passenger stranded and a police officer was dispatched to pick her up and transport her back to the station, where relatives would pick her up. Unfortunately, the officer sent to pick her up was Stephen J. Maiorino, who was on this episode of TruTV’s Most Shocking, and he had different plans for how the evening would end.

After picking up the victim Maiorino drove her to the police station where, according to court documents, he told her to perform oral sex on him or she would face a DUI charge too. Out of fear for her life the woman complied but the assault didn’t end there. Maiorino then drove the victim away from the police station and with one hand held her face down on the hood of his patrol cruiser, while his other hand held his police issued firearm. Maiorino then took his victim back to the police station and made one last threat. He pointed his firearm at her and told her that if she told anyone, he’d kill her, her family, and anyone else she told.

Thankfully, the woman had the courage to report the incident and led investigators to the scene of the crime, where a bundle of DNA evidence was found, including a condom with the victim’s DNA and that of Maiorino. As the video below details, Maiorino voluntarily turned over his clothes (which also had matching DNA from the condom found at the scene of the crime) and then walked himself into the Palm Beach County jail – where he’s being held without bail.

On Tuesday the Sun Sentinel reported that Maiorino was found “not guilty” by a jury of four men and two women. Their article goes on to say that:

The judge asked everyone in the courtroom not to show any emotion with the announcement of the verdicts in the trial of Stephen Maiorino, a former Boynton Beach Police officer accused of raping a young woman at gunpoint on the hood of his patrol car.

But the silence was shattered when the 21-year-old accuser cried after hearing “not guilty” to all four charges, and she wailed, “No! No!” before her dad held her as she stumbled out the door. She screamed and cried out, “Why?” before being helped onto an elevator.

Over at the defense table, Maiorino pressed his lips together, cried and looked over at his visibly relieved loved ones, before Circuit Judge Samantha Schosberg Feuer thanked the jurors for the week they spent on a difficult case.

The panel of four men and two women deliberated for 10 hours over two days, before acquitting the 36-year-old ex-cop. The judge told Maiorino he could check out of Palm Beach County Jail and walk free for the first time since he was arrested on Oct. 30.

I can’t be certain that Maiorino did, or did not, get away with rape here. In my opinion it seems Maiorino might have as some of the facts seem too odd to fit the “defense’s” story of consensual sex. For example, the woman was with a MAN when he was stopped for DUI. She states that she had intended to go home with him (as they had been courting one another). I don’t know this woman, but it seems unlikely that she’d go from being with one man, to randomly having consensual sex with a stranger (let alone a cop) in under a hour.

If that were the case, that the woman had a police fantasy she wanted played out, then why report the ‘crime?’ Wouldn’t she have just checked this action off her bucket list and moved on? Of course the defense brings up the pending civil lawsuit as motivation for her accusations. Though that could easily be explained as the only form of ‘justice’ you can (sometimes) get with a police officer – suing the taxpayers.

Let’s also not forget the fact that Maiorino was driving around in his police cruiser with condoms. Didn’t any of the jurors wonder why a police officer, who’s married with two kids, was driving around with condoms? Maiorino’s attorneys would like you to believe that this proves consensual sex yet, for me, it creates more questions. Even though Maiorino threatened his victim he probably had a backup plan if she did report the crime. That plan was consensual sex, which is why he didn’t attempt to get rid of any ‘evidence,’ doing so would make his consensual defense useless. While, IMO, having condoms on his person while on duty proves premeditated rape.

Even if I’m wrong, what we seem to have here is a case of jurors taking the officer’s version of events over that of the victim’s. It seems highly unlikely that these events transpired based off immediate attraction and lust. Hopefully, the family can find some form of justice and Maiorino won’t be given his former job back because he still partook in actions that police officers shouldn’t be doing. I guess we’ll just have to wait and see if Boynton Police department is going to let this guy back on the force. I don’t see this happening, because it was this very police department that brought the charges against him in the first place. That’s something that rarely happens, and should reflect the seriousness of their belief that this crime actually took place.