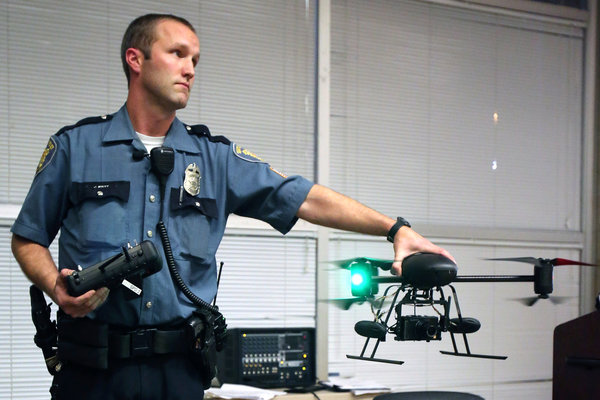 Adam Rupeka, founder of Capital District CopBlock, has been accused of “crashing a drone” into the State Capitol building. He’s being charged with Reckless Endangerment and has been released under the supervision of the Albany County Probation Department. This is when Civilians Against CopBlock notified me that “one of my CopBlockers” had damaged property. Something we at CopBlock.org take very seriously and, as the Co-Founder of CopBlock.org, I took it upon myself to open an investigation into these claims.

I decided to start my investigation by reading the blog post, “NY State Police Steal Property – Without Any Crime and NO Warrant” written by Adam himself. In that post is a video (also posted below) which I took into account during my, impartial, investigation. From these sources I determined  that several days prior to the ‘official’ charges “Investigator” Ronald R. Pierone Jr was unable to articulate any crime Adam had committed. He was free to leave but the NY State Police thugs (Pierone & Lt B. T. Colwell) decided to ‘hold onto’ Adam’s drone even though they had no legal right to do so. At this point in my investigation I started to wonder why I was investigating Adam and thought that maybe the NY State Police should be investigating their own instead. Nevertheless I continued on with my investigation.

Had the drone been returned in the two day timeframe Pierone gave Adam my investigation might have never happened but he didn’t return it and instead charged Adam with a crime. As reported on by CBS6 of Albany, NY:

A Troy man was arrested after he crashed a radio controlled drone into the State Capitol in September. State Police said on September 17, Adam Rupeka was flying a drone outside the State Capitol when it crashed into one of the chimneys on the building, and landed on the roof.

At this time in the investigation I gave my reports to other CopBlock Network (CBN) Contributors for review. I wanted to be sure that my conclusion would support theirs before I went ahead and publicly stated my finding. I was shocked at the responses I got from my fellow colleagues. For example;

Ryan Scott said, “Goddamn it Ademo, why are you wasting my time with this shit?! Adam obviously didn’t harm anyone!”

While CopBlock.org Editor and NVCopBlock.org founder, Kelly Patterson, said, “Adam Rupeka’s 2 pound drone crashed into a concrete chimny on public property and we’re supposed to investigate him? Didn’t this happen after Adam went to that same police station [that stole his drone] and flew his new drone over it? Seems NY State police are vindictive and that Adam didn’t break any of CopBlock.org’s policies. We should be promoting him not investigating him.“

The last point made by Patterson was a good one that I had forgotten about. For those unaware, Adam took his new drone to the barracks of the police that were holding his old drone hostage, illegally might I add per their own rules, and conducted a first amendment audit. One that the NY Police failed miserably when Adam schooled Trooper Fougere on first amendment rights.

It should also be noted that during my investigation into Adam’s crashing of a drone onto a publicly funded building I came across this post published in 2012 at CopBlock.org, where the Montgomery County (Texas) Sheriff’s Office had a big day planned with their $300,000 (taxpayer funded) drone. The MCSO had decided to use their new toy to take an aerial picture of the SWAT team and their bearcat, only the drone lost contact with its controller and crashed into the bearcat. This caused thousands of dollars in damage to the drone and bearcat, plus, endangered the lives of many. Yet, no charges were ever filed nor was the drone taken away – for any length of time (aside for repairs) – from the sheriff’s office.

Adding together the facts of the case, omissions by Adam’s accusers and further inquires from Adam’s colleagues (here at CopBlock.org) my investigation concludes that Adam Rupeka violated none of CopBlock.org’s policies on filming police. With that being said I’ve also come to the conclusion that Adam will be featured as the CopBlocker of the Month and will be nominated for the prestigious “CopBlocker of the Year” award. Furthermore, we’re asking anyone who believes that “Badges Don’t Grant Extra Rights”, or believes that Adam is being targeted because of his consistent filming of public officials, to call Ronald Pierone. Let him know your thoughts about this completely ridiculous persecution of Adam.