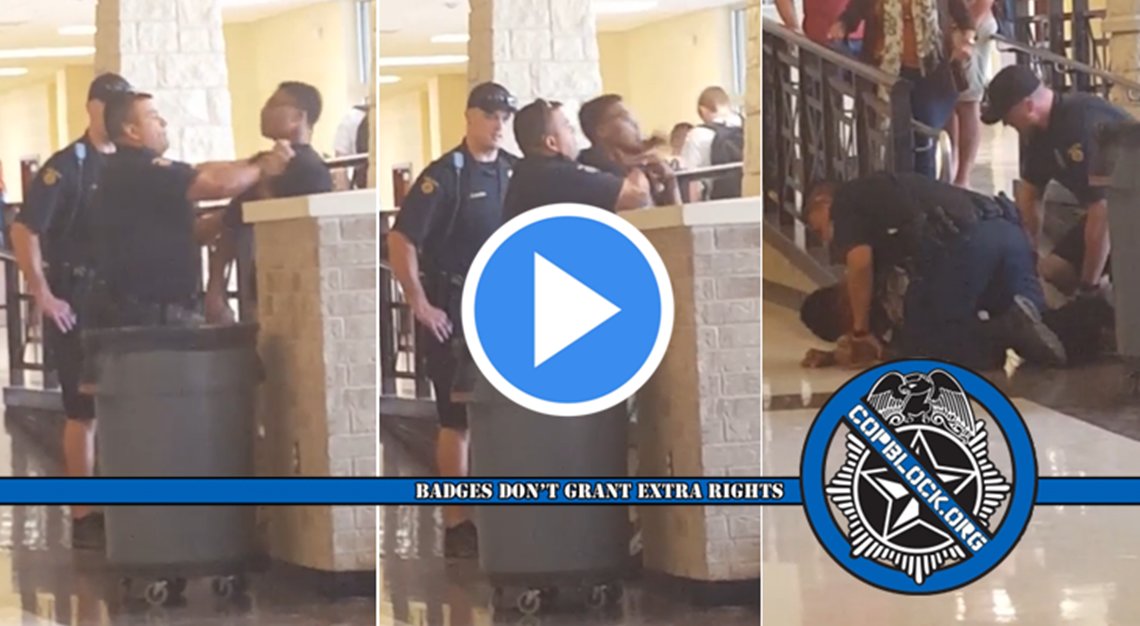 Video has emerged showing a Round Rock police school resource officer grab a teenage boy by the neck before taking him to the ground at a Texas high school.

Round Rock police said in a statement that the incident happened on Thursday at around 2:15 p.m, after “school resource officers were requested by Round Rock High School administrators to assist with a fight in the cafeteria between two male high school students.”

Police say the student in the video – identified as 14-year-old Gyasi Hughes – “refused to comply with an administrator and was attempting to continue to fight the other student” so resource officers “began speaking with [him] to calm him down and to de-escalate the situation by walking him into another area of the building.”

The footage, captured on cell-phone by another student, shows two officers speaking with Gyasi as the teen pleads his case. After talking to the officers for a moment, Gyasi can be seen putting on his backpack, before attempting to make his way past them in an apparent attempt to leave.

Police maintain however that Gyasi “refused to calm down and was attempting to get past the [resource officers] to the location of the other student to continue with the altercation.”

“After repeated attempts to calm the non-compliant student, and stop him from going after the other student,” police say, “officers were forced to detain him for his safety and the safety of others.”

No arrests were made after the incident but the teen was suspended for one day from school. His father, Kashaka Hughes, says he plans on pressing charges against the resource officer for his use of excessive force on his son.

Gyasi says he got into the fight because another student took his prescription goggles used to play football and wouldn’t give them back. He says he grabbed the other student’s backpack to look for the goggles when the altercation began.

The teen also maintains that he was not trying to get past the resource officers to continue fighting. Instead, he says he was simply trying to remove himself from the situation because he was upset over the goggles and with police “getting in his face.”

The boys father says he filed a complaint with Round Rock police asking for an internal affairs investigation, and that officials have reportedly initiated a review of the incident.