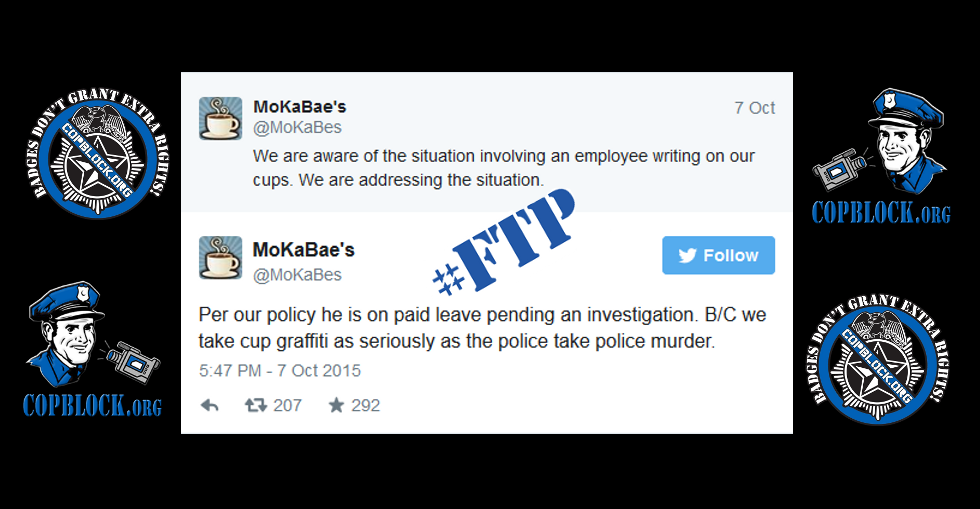 We all know cops are sensitive and they have a tendency to get really butthurt when people criticize them for beating, illegally arresting, and/or murdering people and having absolutely no accountability for that whatsoever. We also know that they aren’t fans of the First Amendment. So the latest trend of refusing service to armed gang members who are trying to distract from that reality by including a shiny badge among their litany of weapons is really getting their panties in a bunch these days. Especially when those things involve their favorite past-time, shoving donuts in their face. As we’ve seen from past examples, that is enough to get them whining at glass shattering decibels. The latest establishment to join the growing list of food servers that don’t want armed people with a history of violence around them while people are trying to eat in peace is MoKaBe’s Coffee Shop in St. Louis. Recently, an employee there began writing “FTP” on the lids of cups for to-go orders. Soon after that, as everything eventually does, this made its way to the Twitterverse:

It wasn’t long after that before the expected crowd of CopSuckers (who are mainly cops, their families, and people working as security guards because they failed to make it as a cop, but are hoping to somehow change that in the future by starting anti-CopBlock facebook pages and shooting unarmed drivers in order to get into the good graces of their heroes) responded with the predictable threats of violence that totally counteracts the assertion that cops and the people who blindly support them are a bunch of violence prone neanderthals and racists. As a result, the owner of Mokabe’s announced he was conducting a full police-style investigation of the offending employee: You could actually hear teeth gnashing when that was posted. In fact, there’s an (unconfirmed) rumor that astronauts on the International Space Station said, “what the fuck was that?” at that precise moment. Predictably, since they’re giant hypocrites and crybabies, this really sent cops and Copsuckers nationwide into a frenzy of crying and posting angry stuff on the internets. It only got worse once someone came forward, claiming to be that meanie who wrote stuff on the coffee cup that wasn’t within the proper level of worship toward cops:

Starting my paid leave after work tonight. To say I am contrite would do no justice… Just like the police https://t.co/pdIN9XP5w9 — Goku Super Baeyan (@jcos24) October 7, 2015

It shouldn’t exactly be shocking that MoKabe’s is not a fan of the cops since this happened last year:

The police just gassed MoKabe’s! We are inside! #Shaw via @derayhttps://t.co/Ex1NlLVLBP — Conflict News (@Conflicts) November 25, 2014

Personally, I’m actually glad that people are putting social pressure on the armed thugs roaming our streets stealing, assaulting, and killing people then expecting to be treated like heroes for their misdeeds. Or for everyone to simply overlook them like what they were accustomed to before those meddling kids with their cameras came along and ruined their coffee and donut party. Since their own “leadership” has shown they have no interest in weeding out the “bad apples,” being publicly shunned is probably one of the best peaceful options to make all these mythical “Good Cops” actually stand up instead of just standing by doing nothing while their co-workers abuse people in front of them. #PoliceLiesMatter come out from behind the #ThinBlueLie

And don’t forgot the other #FTP. Always Film The Police. It might save a life and that life might be yours.