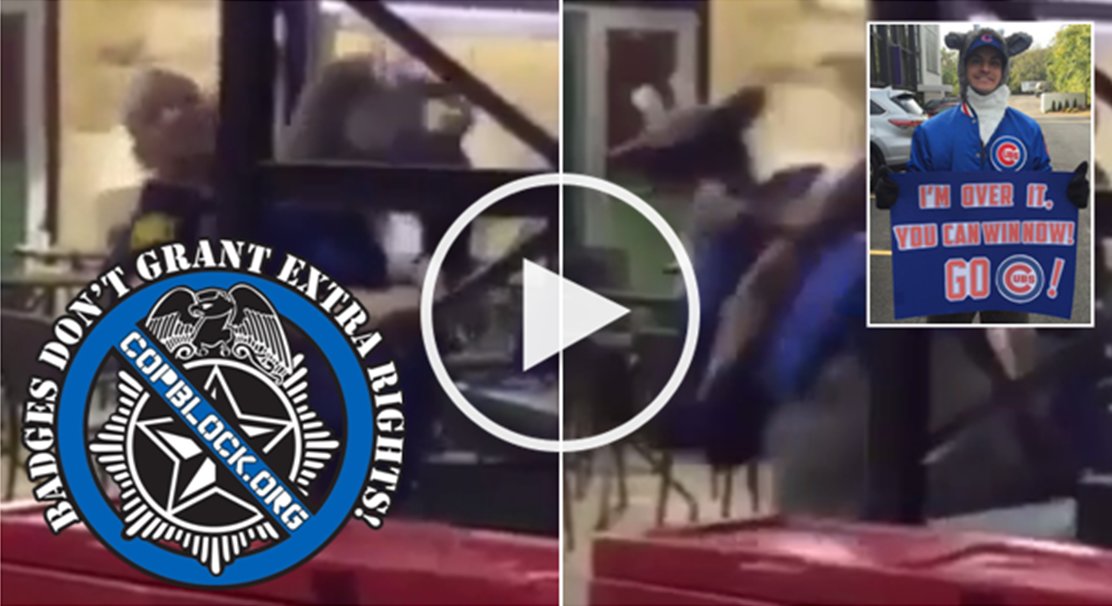 Cellphone footage recorded Wednesday during a Chicago Cubs, Pittsburgh Pirates National League Wild Card game shows a fan being body-slammed by a Pittsburgh cop while being ejected from PNC Park.

The man, identified only as “Dimitri,” says he “was hit with a ‘spit’ chewing tobacco cup by a pirates fan in the left field bleachers,” so he “exchanged words” with the man and was told to leave by an usher.

After vacating his seat, Dimitri says he was making his way out of the stadium, “when a Pittsburgh police officer who didn’t know any details confronted” him and he asked the cop if he could “talk to him about the situation.”

Video filmed by a friend shows the unidentified officer react by grabbing Dimitri around the neck and saying, “put your hands behind your back.”

“Stop it!  Seriously,” Dimitri can be heard yelling before trying to remove the officers arm from his neck.

“Or what?” the officer retorts.

It is at the point that a PNC Park security guard approaches the man filming and appears to attempt to smack away his phone causing him not to be able to record what happens next.

“He’s messing with my friend for no reason,” says the man. “He just body slammed my friend!”

Luckily, footage captured by another bystander shows the officer pick Dimitri up and body-slam him to the ground as drunken onlookers revel at the spectacle, some protesting.

Dimitri says after he was slammed to the ground, he was handcuffed but that no arrest was made and no charges were filed against him.

On the bright side for the man, the Cubs won the game 4-0 and are now facing the St. Louis Cardinals in the National League Division Series tied one game apiece.

Game three of that series will be played on Monday at Wrigley Field. The winner of the best out of five match up will advance to the National League Championship.

“They merely kicked me out for being a [Cubs] fan and [being] excited to be on TV and watching my team win,” Dimitri said.

Dimitri is in good spirits about the Cubs playoffs performance but says the body-slam “forced [him] to make a trip to the emergency room after suffering injuries to his back and wrist.”

Pittsburgh police have not commented on the incident but a spokesman for Mayor Bill Peduto said Monday that the mayor saw the video on Sunday night and immediately ordered an internal investigation.

Dimitri says he has been speaking with an attorney and is currently weighing his legal options.