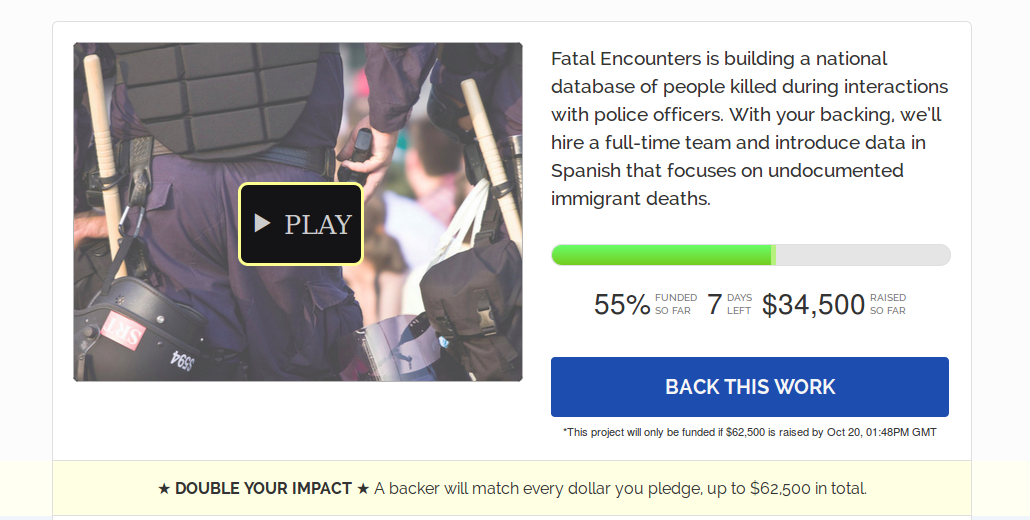 But Burghart — editor/publisher of the Reno News & Review and journalism instructor at the University of Nevada, Reno — found that no such database existed. The Department of Justice did not publish the data, nor did any other police outfit. Burghart recognized the need to bring transparency to this situation so that meaningful solutions could be implemented. Thus, he launched Fatal Encounters, which seeks to build a comprehensive database of deadly police violence.

Excited to learn about his efforts, we posted about Fatal Encounters here at CopBlock.org over a year ago.

Since then Burghart has assembled a team of passionate doers to help achieve a thorough database. Together, they estimate that they’ve gone through about 40% of resources, from which they’ve documented 8,200 deaths at the hands of police in the US since the year 2000. (I drew from this body of work for the video Killed By Police: A Visualization in BBs.) Once their work is done, the Fatal Encounters crew believes the number will be around 20,000. Clearly, this is important work.

Right now the Fatal Encounters crew are doing a crowdsourcing fundraiser via Beacon to cover research costs, expand their new sister-site Encuentros Morales, which combs Spanish-based media and is already the largest database of foreign nationals killed in the US, and to pay employees (so that they can allocate more time now, to bringing these numbers to light).

They already have raised over half of their $62,500 goal. Once that goal is matched. the amount they receive will double, thanks to Beacon and other donors. But, if they fall short of their goal, they won’t get a dime. So, if you appreciate their work and have the means to contribute $10 or $1,000, it’d be put to go a good cause. Please don’t be shy about sharing Fatal Encounter’s crowdfunding campaign with those in your sphere. Thanks in advance for your help.