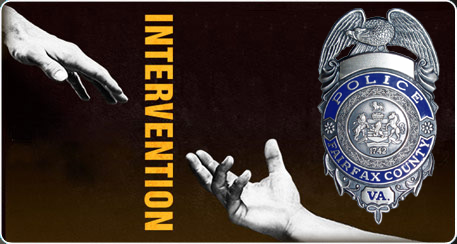 Keeping up with the news regarding the Fairfax County Police Department is a lot like watching the TV show, ‘Intervention.’ You recognize the same sense of entitlement, self-pity, denial, and unbridled rage at being confronted with the seriousness of the situation  that you see exhibited by many of the addicted individuals featured on the show. There has even been an actual intervention of sorts, two actually, where residents came out and read statements detailing the outrageous and destructive behavior of a department addicted to excessive and unaccountable use of force and policing for profit schemes, and urged its leaders to make much-needed changes.

People featured on ‘Intervention’ usually admit to their problem at long last and then tearfully commit to addressing it. And often the epilogue shows that they have relapsed and gone back to their old ways. Well this is the latest relapse for the Fairfax County Police Department. According to the article (be sure to check it out), Officer Jacquelyn D. Hogue, a parking enforcement agent with the FCPD, turned the parking lots of several auto repair shops into her personal hunting ground for citations.  Since 2008, Hogue had relentlessly ticketed cars for having expired registration and inspection stickers as they waited on the lots to be inspected and brought back into compliance.

This caused great hardship for shop owners, who often absorbed the cost of the tickets to avoid losing customers. From the article:

“They don’t understand why Fairfax police have zealously sought to enforce laws on expired tags or inspections, mainly on drivers who are making the effort to get their cars into compliance, while on private property. Hogue’s appearance in the industrial park often set off a scramble to hide customers’ cars inside the shops, the shop owners said.”

Some of the shop owners recounted their experiences dealing with the abusive ticketing scheme:

“[Bruce] Redwine, who has been operating Chantilly Service Center for 21 years, said he does the state inspections and emissions tests first thing in the morning, to make sure no expired stickers are visible. But ‘cars sometimes fail the emissions test,’ he said. ‘Sometimes it’s not just a simple fix…’

…They’re harassing the small businesses trying to make it in this tough economy,’ said Ray Barrera of A&H Equipment Repair. He estimated that his customers’ vehicles had been hit with $60,000 worth of fines and fees over the past six years.”

What would motivate Hogue to ticket these cars so aggressively? Probably quotas. We know for a fact that the Fairfax County Police Department has them.

Comments from FCPD spokesperson, Lt. Brooke Wright, show no remorse. In fact, they seem downright combative: “Why aren’t they barking up their property manager’s tree? That is their business. Without that letter, we have no authority — none — to be in that parking lot.”

The letter she is referring to is one that the FCPD received from the property management company that permits officers to come onto the private property and enforce traffic, parking, and towing ordinances. In further comments, Wright implies that she views this as a service the property owners actually desire: “The minute they stop enforcing, they’re going to get calls from the property manager.”

That seems doubtful. However, I am reminded of the time that the HOA for one of my previous residences (in another jurisdiction) brought in the police department to assist with some thefts of items in unlocked cars. The police officer who attended the meeting said that they could enter into an agreement to patrol the neighborhood and brought a copy of the letter the HOA would need to submit for them to do so. It explicitly stated they would also be giving permission for the police department to ticket for expired tags and inspections, parking violations, and all of the other wonderful revenue-generating items that make cops’ hearts sing.

My guess is that the property management company sent that 2009 letter to have a real problem addressed, not realizing that what they were really doing was entering into a protection racket with regular shakedowns of repair shop clients as the payment.

Well where are Fairfax County’s elected officials on this?

“Just because you have the right to do something, doesn’t mean you should do it,” said Dranesville District Supervisor John

Foust. Oh wait. That was Foust trashing a gun store for legally setting up shop in a commercially-zoned location that happens to

be near a school. As usual, Foust and the other mealy-mouthed, do-nothing, say-nothing members of the county Board of Supervisors (BOS) are characteristically, malfeasantly quiet regarding this latest FCPD scandal. The BOS are enablers of the worst order, using the vast resources of the state to protect the police department from experiencing the consequences of its actions.

Frustrated shop owners were left to take matters into their own hands, and that’s exactly what one of them did:

In October of last year, Hogue walked up to drop off a ticket for a car with expired tags that had already been pulled into Redwine’s garage. Says Redwine, “I swiped it from her hand. We had a few choice words. I didn’t touch her.”

In return, Hogue had Redwine charged with felony assault on a law enforcement officer, even though parking agents don’t meet the state’s definition of law enforcement officer. At his first trial, Redwine was found guilty and sentenced to 4 days in prison. At his appeal, the jury acquitted him in only 20 minutes. Jury nullification is truly a beautiful thing.

As for Hogue, she has been set loose to meet her ticket quota in another part of the county. Redwine filed a complaint with Internal Affairs, but Wright doesn’t expect them to find she did anything wrong. What a surprise.

As for county residents, we’re left to continue watching a police department in free fall with no rock bottom in sight.

@SharonBulova & BOS When will someone realize common thread in all the @fairfaxpolice problems & deal with it? https://t.co/7qTb9EOuRj

Note: This story is even worse than what I laid out here. Read Tom Jackman’s article for all the details.