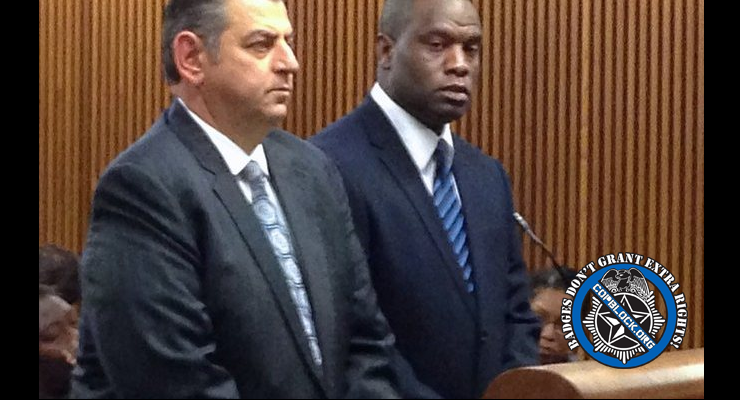 Another Cleveland Police Officer is in hot water today after being arrested for assaulting a woman and holding her against her will. I believe they usually refer to that as kidnapping, don’t they? Or is that just when one of us does it?

Officer Mister Jackson was arrested Saturday in the 2000 block of Tate Avenue, on Cleveland’s west side.  Of course the Cleveland police are investigating themselves and I’m sure they will find officer Jackson did nothing wrong. On the bright side, Mr. Jackson has been placed on UNPAID administrative leave, so at least we won’t be forced to pay his salary while he is being investigated.

It seems as though Cleveland police has an entire barrel full of bad apples. We can’t stop hearing about officers in the greater Cleveland CopBlock area that have broken the law they claim to uphold. It leads me to believe this is the rule not the exception. In the dealings I have had personally with Cleveland police as well as the surrounding areas of Cleveland,  it is my opinion, they are all guilty of something. Dam now I sound like them don’t I? Do any LEO’s hear how ridiculous that sounds? But with all I hear about Greater Cleveland police officers, I can’t help but think that way.

Anyone living in or near Cleveland knows that Cleveland is not just Cleveland. It is Parma, Lakewood, Euclid, Garfield Heights, Maple Heights, East Cleveland, Collinwood, and a dozen other surrounding suburbs. If I had the time to go and document every time I see one of the cops around here break the law, I’d never get anything else done. I wouldn’t have time to pee! They run red lights. They almost never use turn signals. They speed, and every other manner of traffic violation. If there is a traffic law, there is not a cop in Cleveland that hasn’t broken it. All the while enforcing the same bullshit victimless crime laws, on us!

Cleveland itself seems to have the most instances of the violent cops. The suburbs seem to have more of the corruption like stealing and things like that. Just last week three East Cleveland cops were charged with illegally obtaining warrants to search suspected drug dealers, who they then robbed! Of course the roles do get reversed occasionally. Parma’s own James Manzo is a violent thug. He smashed a 16 year old kid in the head with his flashlight, then lied to investigators where the blood on his equipment came from. That fiasco cost the people of Parma 40,000 dollars.

I am starting to believe that these types of behavior must be taught. Rookie police will follow the lead of their training officer, so for every bad cop that gets caught, there has to be at least one other that hasn’t been caught. He taught the rookie all he knows right? So he had to have taught that, “Cops don’t go to prison” and “You can get away with anything, you’re a cop!” I refuse to believe this is just a coincidence. It then follows that not only are these lessons being taught in one department, but in all of them. Cops talk to each other between departments to see what works and what doesn’t. I picture seminars where after the ceremony is over, cops stand around discussing violating peoples rights, and ways to get away with it. Officer Jackson is a prime example of the fact that Cleveland police have more bad apples in the barrel than good ones. Since I started Greater Cleveland CopBlock, Ive seen numerous instances of Cleveland police in hot water. Timothy Russel and Malissa Williams case saw over 75 officers disciplined, fired and/or tried. Officer Vincent Montague shot a man for making a left on W6th street Downtown. Timothy Loehmann executed Tamir Rice. Several officers were involved in killing Tanisha Anderson. Matthew Craska killed Dan Ficker, in someone else’s jusrisdiction I might add, with the help of an off duty Cleveland cop, Dave Mindek. (Mindek owns a bar in Fairview Park Ohio by the way, you may want to steer clear.)

So there seems to be quite a few rotten apples in the Cleveland Police barrel.