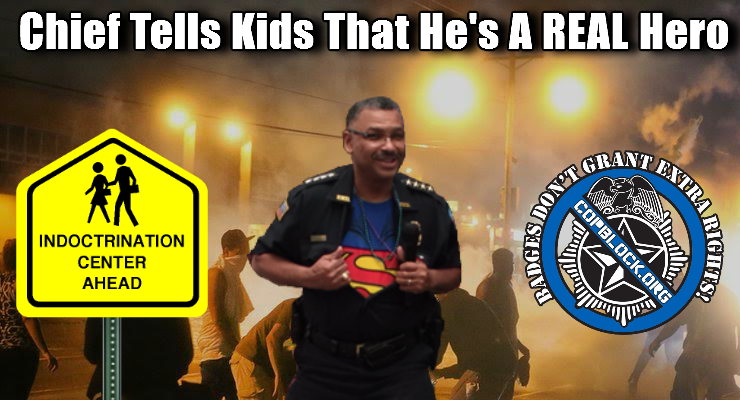 So what is a hero anyway? Do heroes beat their wives or abuse their children? Do heroes participate in a culture of violence that preys on the weakest and poorest among us? Do heroes overwhelmingly arrest, beat, or kill someone because their skin color doesn’t look like theirs? Of course not! So how can we, as citizens, still continue to worship police officers as heroes?

So, imagine my dismay when I saw the Pensacola Police Department’s Chief of Police dressed up like a hero – literally calling himself a hero at an event called “Heroes in Our Community”. (This is the same police department where officers murdered 17-year-old Victor Steen and badly beat a woman during a traffic stop)

According to their website, Heroes In Our Community states that,

… real heroes are not people of great renown. They live near us. By performing small acts, they win our admiration. Since children imitate what they see and hear, it is important to point out to them what actions merit honor and which individuals deserve admiration.

Do we, as a community, really want our children to admire the atrocities committed by  police on a daily basis? Just in the past month or so, I’ve written about police officers that:

It’s beyond time to stop the indoctrination of our children! Though some police officers are capable of doing something heroic, they are not heroes. It’s bad enough that police are trying to indoctrinate the general public with the non-existent ‘war on cops’, they have crossed the line by spewing their ‘holier-than-though’ rhetoric to our young and venerable children.

If you are a teacher, a principal, or even a community leader/organizer, protest any decision to ‘showcase’ police in our schools and our communities. Instead, select someone from a different profession, such as a firefighter. Most of them are volunteers who put themselves in harms way to save people who need help – and they don’t do it under the threat of fines, arrest, imprisonment, or even death. In my opinion, that’s the definition of a true hero.

I’m guessing that Chief Alexander hasn’t noticed the shifting tide in America. It seems that even the comic book superheroes have had enough. Recently, makers of the Superman and Batman comic books have released issues, showing the ‘superheroes’ fight against corrupt police. If you haven’t read those articles yet, it’s well worth the read.