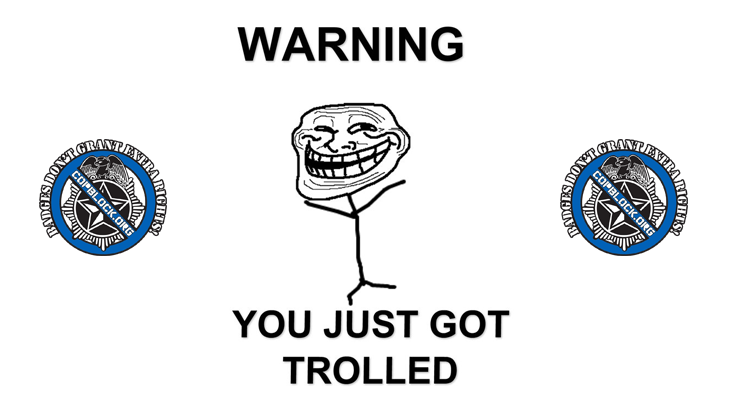 If you’re hanging out with the #MACtour Crew the chances are you’re going to end up filming the police. Just take a look at the MAC (Mobile Accountability for Cops) YouTube channel where we’ve published 15 videos in 21 days! There are even some we still have to work on so make sure to subscribe while there.

If we’re not filming the police we’re probably working on post production or, like the other day, life errands. You know those pesky tasks known as laundry, cooking and grocery shopping. Things that are unavoidable in life but can also provide opportunities like the one we caught on video the other day while leaving Wal Mart. That’s when we noticed a Kansas City, KS police car parked in the parking and decided to do a little live police trolling.

While Officer Thorne agreed that “Badges Don’t Grant Extra Rights” his actions proved differently. Not only was he parked on private property – and didn’t state that Wal Mart allows him too or called him there – but he also refused to let us run his name or search his car. Had the roles been reversed would our refusal of Thorne’s request gone the same way? Would he respect our rights to refuse to provide ID or a search? Or would Thorne state that his badge gives him the right to forcefully ID us and search my car?

Later in the week we went out and CopBlocked on the Missouri side of Kansas City. Most of the time spent CopBlocking is spent trying to find the police so when we did Brian decided to lighten it up a little bit by offering police officers a “Thin Blue Line” sticker – which you can get here – that also says, “Remember your Oath.”

The videos above were spontaneous so we didn’t really have a set goal with them. We just thought it would be funny to question the cop in the same fashion as many police would do to anyone of us and to offer them a sticker. We plan to do more videos like this and after this round of practice we’re excited to get to it. How do you think it will go? Will we get to search a police cruiser? How do you think the police will react to their own questions?