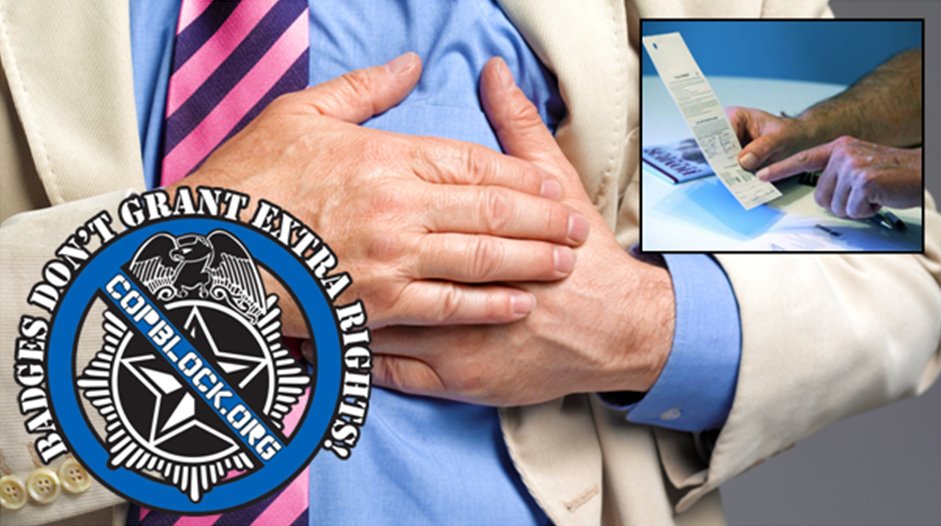 A Lemont, Illinois man says his son was given a $1500 speeding ticket while rushing him to the emergency room for a heart attack last month.

Michael O’Neil was attempting to take his dad William, to Good Samaritan Hospital in Downers Grove, when he was pulled over by an Illinois state trooper on Interstate 355.

60-year-old William O’Neil had his first heart attack back in 2011. On Sepember 27, he said he was grocery shopping when he “got this strange feeling, disoriented.”

William says after he went home and got into bed, he “got some pretty wicked” pains in his chest and shoulder and told his son Michael, “We’re going to have to go to the hospital.”

Michael was pulled over at around 10:30 p.m. by a trooper who first approached the passenger side of the vehicle.

“I rolled down the window and he said, ‘What’s going on?’” William said. “I said, ‘I think I’m having a heart attack. We’re on the way to the hospital.’ I said, ‘If you will allow me, I will reach down onto the floor for my bag of medication.’”

“He told me to lift up the bag,” William added.” I lifted it up and he said, ‘You don’t look like you’re having a heart attack,’ which, you know, um, was pretty rough. I mean, that’s pretty rough.”

The man says the trooper then made his way to the drivers side of the vehicle and asked Michael for his license. Michael responded by asking if he could take his father to Good Samaritan Hospital – where William was previously treated for a blocked artery in 2011.

William says the trooper told his son that his drive to the hospital was no longer happening, and that if he wanted his father to receive medical care, he would have to go to the hospital in a police requested ambulance.

The trooper then told Michael he was getting a citation and reportedly issued him a $1,500 fine for going 82 mph in a 55 mph zone after his father was taken away.

William says after emergency responders told him and the trooper that his heart readings were abnormal, he was taken to Adventist Bolingbrook Hospital (not his desired destination) where he was diagnosed with a heart attack.

“[The trooper] never said anything to me, like pop his head in to say anything,” William said. “It was a terrible night. I was just going crazy all night because I felt I like, you know, I was very restless, very agitated.”

Hospital records show that William underwent surgery the next morning where he received a stent for another blocked artery.

He filed a complaint with Illinois state police, but Master Sgt. Matthew Boerwinkle says the agency has determined that the trooper acted properly during the incident, because citizens cannot be trusted on the road to drive during medical emergencies.

“The chances of causing a crash increase significantly during self-transport, because motorists tend to drive erratically and speed excessively during medical emergencies,” Boerwinkle said. “It would be difficult if not impossible to render effective first aid to a passenger or monitor their medical condition while providing self-transport to a hospital.”