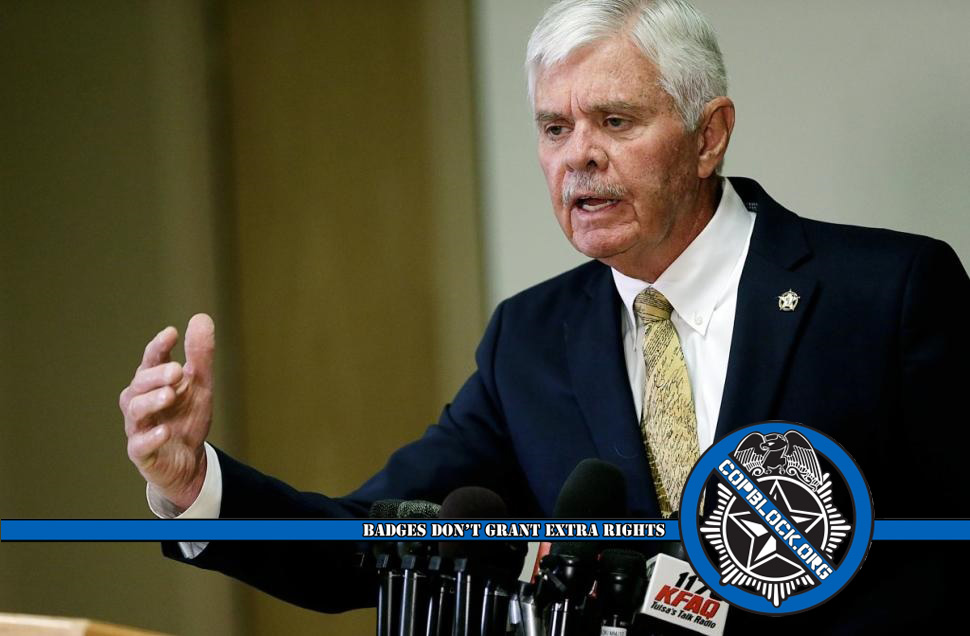 In a shocking twist it turns out that Tulsa Sheriff Stanly Glanz is corrupt and was stealing money from the people of Tulsa County. Of course I’m being completely facetious and there is not anything shocking about this what so ever. The recent Tulsa grand jury investigation exposes Sheriff Glanz theft of a $600 monthly stipend which was supposed to be used to cover the cost of using his own personal vehicle for county business. As it turns out, for an undisclosed number of months or maybe even years, Sheriff Glanz has pocketed the monthly $600 stipend and used a county owned, county fueled vehicle to conduct his official business.

Glanz has been formally indicted on charges related to the murder of Eric Harris by Robert Bates, a 73 year old reserve sheriff’s deputy, who “thought” he was drawing his T.A.S.E.R but instead “accidently” pulled out his gun and shot an unarmed Harris who was already down on the ground and set upon by multiple officers.

Glanz resigned immediately following the indictment on two misdemeanor counts in which the grand jury accused the 50 year law man of refusing to perform his duties by not releasing related documents about the reserve deputy program, including a 2009 memo directly concerning his longtime friend Bates and his lack of training. The grand jury interviewed more than 30 witnesses in the case over a period of several weeks before handing down the indictment which says Glanz “denied lawful requests for the release of internal investigations into his office’s reserve deputy program”, a program which had benefited from thousands of dollars in cash donations as well as equipment and cars from Bates.

The family of Eric Harris, through their attorney, gave CNN documents from the 2009 internal inquiry which found that Bates was shown special treatment and that training policies were violated where Bates was concerned. The investigation further showed that Glanz told his subordinates to “hold on to” the information and that supervisors intimidated employees to overlook the violations in relation to Bates and even went so far as to reassign at least three supervisors who refused to forge records. The sheriff’s office has of course denied the findings as reported by the Tulsa World newspaper, refusing to answer to the allegations that Bates’ lawyer has framed as an attack on Bates by jealous officers.

Bates has never denied shooting Harris but has claimed from the beginning that he legitimately mistook his gun for a T.A.S.E.R, a scientifically unfounded argument originally made by a psychologist with an online degree that has received the stamp of approval from the police community and given its own term “Slips and Capture“. Slips and capture is nothing more than a bogus excuse where in high stress situations one means to do one thing and actually does another. Of course this phenomenon has really only ever been used an excuse by poorly trained, quick to the trigger, authoritarian scum who have murdered suspects who are already apprehended, particularly this case and the case of Oscar Grant who was murdered by B.A.R.T Police while completely subdued and handcuffed.